From Infogalactic: the planetary knowledge core
Jump to: navigation, search
For other meanings, see 16:9 (disambiguation). 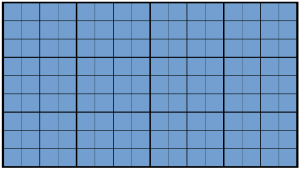 A 16:9 rectangle in which rectangles visualize the ratio. Note that the groupings are not square. 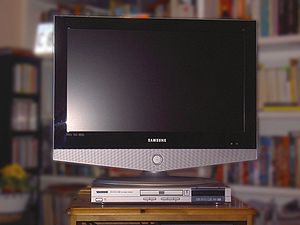 An LCD television set with a 16:9 image ratio.

16:9 (1.77:1) (16:9 = 42:32) is an aspect ratio with a width of 16 units and height of 9. Since 2009 it has become the most common aspect ratio for televisions and computer monitors, and is also the international standard format of HDTV, Full HD, non-HD digital television and analog widescreen television. Also used inversely (9:16) as the ratio for mobile phone screens. 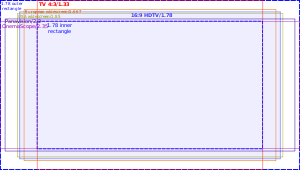 While 16:9 (1.77:1) was initially selected as a compromise format, the subsequent popularity of HDTV broadcast has solidified 16:9 as perhaps the most important video aspect ratio in use.[citation needed] Most 4:3 (1.33:1) and 2.39:1 video is now recorded using a "shoot and protect" technique[3] that keeps the main action within a 16:9 (1.77:1) inner rectangle to facilitate HD broadcast[citation needed]. Conversely it is quite common to use a technique known as center-cutting, to approach the challenge of presenting material shot (typically 16:9) to both a HD and legacy 4:3 audience simultaneously without having to compromise image size for either audience. Content creators frame critical content or graphics to fit within the 1.33 raster space.[citation needed] This has similarities to a filming technique called Open matte.

In 2008 the computer industry started switching to 16:9 as the standard aspect ratio for monitors and laptops. A 2008 report by DisplaySearch cited a number of reasons for this shift, including the ability for PC and monitor manufacturers to expand their product ranges by offering products with wider screens and higher resolutions, helping consumers to more easily adopt such products and "stimulating the growth of the notebook PC and LCD monitor market".[5]

In 2011 Bennie Budler, product manager of IT products at Samsung South Africa, confirmed that monitors capable of 1920×1200 resolutions aren't being manufactured anymore. “It is all about reducing manufacturing costs. The new 16:9 aspect ratio panels are more cost effective to manufacture locally than the previous 16:10 panels”.[6] Since computer displays are advertised by their diagonal measure, for monitors with the same display area, a wide screen monitor will have a larger diagonal measure, thus sounding more impressive. Within limits, the amount of information that can be displayed, and the cost of the monitor depend more on area than on diagonal measure.

16:9 is the only widescreen aspect ratio natively supported by the DVD format. Anamorphic DVD transfers store the information as 5:4 (PAL) or 3:2 (NTSC) square pixels, which is set to expand to either 16:9 or 4:3, which the television or video player handles. For example, a PAL DVD with a full frame image may contain a video resolution of 720×576 (5:4 ratio), but a video player software will stretch this to 1024×576 square pixels with a 16:9 flag in order to recreate the correct aspect ratio.

DVD producers can also choose to show even wider ratios such as 1.85:1 and 2.39:1[lower-alpha 1] within the 16:9 DVD frame by hard matting or adding black bars within the image itself. Some films which were made in a 1.85:1 aspect ratio, such as the U.S.-Italian co-production Man of La Mancha and Kenneth Branagh's Much Ado About Nothing, fit quite comfortably onto a 1.77:1 HDTV screen and have been issued anamorphically enhanced on DVD without the black bars. Many digital video cameras have the capability to record in 16:9.

Super 16 mm film is frequently used for television production due to its lower cost, lack of need for soundtrack space on the film itself, and aspect ratio similar to 16:9.[citation needed]

Common resolutions for 16:9 are listed in the table below:

In Europe, 16:9 is the standard broadcast format for most digital channels and all HDTV broadcasts. Some countries adopted the format for analog television, first by using the PALplus standard (now obsolete) and then by simply using WSS signals on normal PAL broadcasts.

Japan's Hi-Vision originally started with a 5:3 ratio but converted when the international standards group introduced a wider ratio of 5​1⁄3 to 3 (=16:9).

In Middle East and Africa, 16:9 is the standard broadcast format for most digital channels and all HDTV broadcasts.