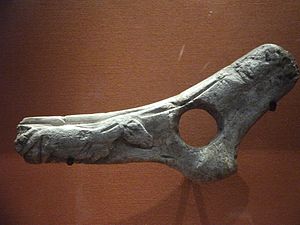 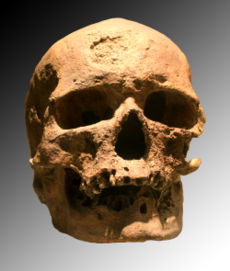 The Abri de la Madeleine (The Magdalene shelter) is a prehistoric shelter under an overhanging cliff situated near Tursac, in the Dordogne département and the Aquitaine Région of South-Western France. The Magdalenian culture of the Upper Paleolithic is named after it, as the type site.[1] Prehistoric finds from the site include the Bison Licking Insect Bite, a carving estimated 20,000 BC. The shelter was reoccupied during the Middle Ages. The medieval castle of Petit Marsac stands on the top of the cliff just above the shelter.

Édouard Lartet & Henry Christy were the first systematic excavators of the site, and published their findings in 1875 as the Age of the Reindeer ("L'âge du renne"). Finds from la madelaine are divided between a number of museums, including the Museum of Toulouse, the Musee des Antiquites Nationales, St. Germain-en-Laye and the British Museum.