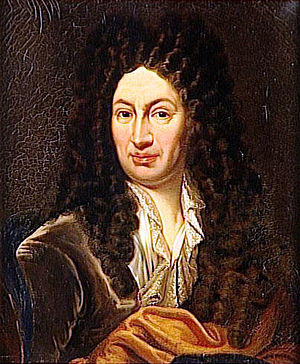 Jean Chapelain, one of the five founding members of the Académie

The Académie des Inscriptions et Belles-Lettres (French pronunciation: ​[akademi dez‿ɛ̃skʁipsjɔ̃ e bɛl lɛtʁ]) is a French learned society devoted to the humanities, founded in February 1663 as one of the five academies of the Institut de France. 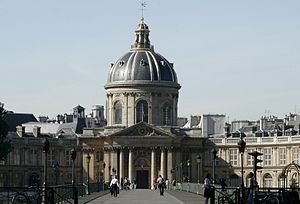 The Académie originated as a council of five humanists, "scholars who were the most versed in the knowledge of history and antiquity": Jean Chapelain, François Charpentier, Jacques Cassagne, Amable de Bourzeys, and a M. Douvrier.[1] The organizer was King Louis XIV's finance minister Jean-Baptiste Colbert. Its first name was the Académie royale des Inscriptions et Médailles, and its mission was to compose or obtain Latin inscriptions to be written on public monuments and medals issued to celebrate the events of Louis' reign. However, under Colbert's management, the Académie performed many additional roles, such as determining the art that would decorate the Palace of Versailles.[2]

In 1683 Minister Louvois increased the membership to eight.[1] In 1701 its membership was expanded to 40 and reorganized under the leadership of Chancellor Pontchartrain. It met twice a week at the Louvre, its members began to receive significant pensions, and was made an official state institution on the king's decree.[3] In January 1716 it was permanently renamed to the Académie royale des Inscriptions et Belles-Lettres with the broader goal of elevating the prestige of the French monarchy using physical symbols uncovered or recovered through the methods of classical erudition.

In the words of the Académie's charter, it is:

Today the academy is composed of fifty-five French members, forty associate foreign members, fifty French corresponding members, and fifty foreign corresponding members. The seats are distributed evenly among "orientalists" (scholars of Asia and the Islamic world, from ancient times), "antiquists" (scholars of Greece, Rome, and Gaul, including archaeologists, numismatists, philologists and historians), "medievalists", and a fourth miscellaneous group of linguists, law historians, historians of religion, historians of thought, and prehistorians.[3]

The Volney Prize is awarded by the Institut de France, based on the proposal of the Académie. It publishes Mémoires.

For a list of the Academy's members past and present, see Category:Members of the Académie des Inscriptions et Belles-Lettres