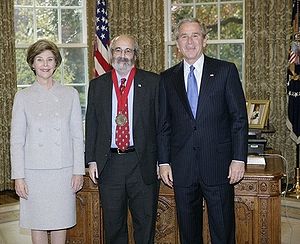 Kors co-founded – with civil rights advocate Harvey A. Silverglate – and served from 2000 to 2006[citation needed] as chairman of the board of directors of the Foundation for Individual Rights in Education (FIRE).

He writes pieces for both libertarian and conservative journals on political matters. He is an occasional contributor to Reason.[3] His essay "Can There Be An After Socialism?" was published by the journal Social Philosophy & Policy.[4]

Kors has also been active in the defense of free speech since his arrival at Penn. In the widely covered 1993 "water buffalo incident", he defended Eden Jacobowitz against charges that he harassed a group of black sorority sisters. In the early morning hours, as the sorority was celebrating loudly outside the dorms, multiple students yelled from their windows, in various ways, for the sorority to cease. When the police came to question students, Jacobowitz volunteered that he yelled "Shut up, you water buffalo", a slur that was characterized as racist. The sorority members eventually dropped the charges.[citation needed] Kors later defended another University of Pennsylvania student in 2005 during a controversy surrounding the student's right to take a photo of other University students having sex against a dorm window.[5][6]

In 1992 President George H. W. Bush named him to the Council of the National Endowment of the Humanities. He was confirmed by the United States Senate and served on the committee for six years.[citation needed]

In 2005, President George W. Bush awarded Kors the National Humanities Medal for his "scholarship, devotion to the Humanities, and...defense of academic freedom." In 2006, he was the T.B. Davie Memorial Lecturer on academic freedom at the University of Cape Town, South Africa.

He has served on the boards of The Historical Society and the American Society for Eighteenth-Century Studies and currently serves as a Visitor of Ralston College.[7]