Alexander Humphreys Woollcott (January 19, 1887 – January 23, 1943) was an American critic and commentator for The New Yorker magazine and a member of the Algonquin Round Table.

He was the inspiration for Sheridan Whiteside, the main character in the play The Man Who Came to Dinner (1939) by George S. Kaufman and Moss Hart,[1] and for the far less likable character Waldo Lydecker in the film Laura (1944). He was convinced he was the inspiration for Rex Stout's brilliant detective Nero Wolfe, but Stout, although he was friendly to Woollcott, said there was nothing to that idea.[2]

Alexander Woollcott was born in an 85-room house, a vast ramshackle building in Colts Neck Township, New Jersey. Known as "the North American Phalanx", it had once been a commune where many social experiments were carried on in the mid-19th century, some more successful than others. When the Phalanx fell apart after a fire in 1854, it was taken over by the Bucklin family, Woollcott's maternal grandparents. Woollcott spent large portions of his childhood there among his extended family. His father was a ne'er-do-well Cockney who drifted through various jobs, sometimes spending long periods away from his wife and children. Poverty was always close at hand. The Bucklins and Woollcotts were avid readers, giving young Aleck (his nickname) a lifelong love of literature, especially the works of Charles Dickens. He also resided with his family in Kansas City, Missouri, where he attended Central High School, where a teacher, Sophie Rosenberger, reportedly "inspired him to literary effort" and with whom he "kept in touch all her life."[3] With the help of a family friend, he made his way through college, graduating from Hamilton College, New York, in 1909. Despite a rather poor reputation (his nickname was "Putrid"), he founded a drama group there, edited the student literary magazine and was accepted by a fraternity. In his early twenties he contracted the mumps, which apparently left him mostly, if not completely, impotent. He never married or had children, although he had some notable female friends, including Dorothy Parker and Neysa McMein, to whom he reportedly proposed the day after she had just wed her new husband, Jack Baragwanath. Wollcott once told McMein that “I’m thinking of writing the story of our life together. The title is already settled.” McMein: “What is it?” Woollcott: “Under Separate Cover.”[4])

Woollcott joined the staff of The New York Times as a cub reporter in 1909. In 1914 he was named drama critic and held the post until 1922, with a break for service during World War I. In April 1917, the day after war was declared, Woollcott volunteered as a private in the medical corps. Posted overseas, Woollcott was a sergeant when the intelligence section of the American Expeditionary Forces selected him and a half-dozen other newspaper men to create the Stars and Stripes, an official newspaper to bolster troop morale. As chief reporter for the Stars and Stripes, Woollcott was a member of the amazingly talented team that formed its editorial board. These included Harold Ross, founding genius of The New Yorker Magazine, Cyrus Baldridge, multifaceted illustrator, author and writer, and the future columnist and radio personality, Franklin P. Adams. Going beyond simple propaganda, Woollcott and his colleagues reported the horrors of the Great War from the point of view of the common soldier. After the war he returned to The New York Times, then transferred to the New York Herald in 1922 and to The World in 1923. He remained there until 1928.[5]

One of New York's most prolific drama critics, he was banned for a time from reviewing certain Broadway theater shows due to his florid and often vitriolic prose.[6] He sued the Shubert theater organization for violation of the New York Civil Rights Act, but lost in the state's highest court in 1916 on the grounds that only discrimination on the basis of race, creed or color was unlawful.[7] From 1929 to 1934, he wrote a column called "Shouts and Murmurs" for The New Yorker. His book, While Rome Burns, published by Grosset & Dunlap in 1934, was named twenty years later by critic Vincent Starrett as one of the 52 "Best Loved Books of the Twentieth Century". [8]

Woollcott's review of the Marx Brothers' Broadway debut, I'll Say She Is, helped the group's career from mere success to superstardom and started a life-long friendship with Harpo Marx.[9] Harpo's two adopted sons, Alexander Marx and William (Bill) Woollcott Marx, were named after Woollcott and his brother, Billy Woollcott.[10]

Billed as The Early Bookworm, Woollcott was first heard on CBS Radio in October 1929, reviewing books in various timeslots until 1933. His CBS show The Town Crier, which began July 21, 1933, opened with the ringing of a bell and the cry, "Hear ye, hear ye!", followed by Woollcott's literary observations punctuated with acidic anecdotes. Sponsored by Cream of Wheat (1934–35) and Grainger Tobacco (1937–38), it continued until January 6, 1938. He had no reservations about using this forum to promote his own books, and the continual mentions of his book While Rome Burns (1934) made it a bestseller.

He was one of the most quoted men of his generation. Among Woollcott's classics is his description of the Los Angeles area as "Seven suburbs in search of a city" – a quip often attributed to his friend Dorothy Parker. Describing The New Yorker editor Harold Ross, he said: "He looks like a dishonest Abe Lincoln." He claimed the Brandy Alexander cocktail was named for him.

Woollcott was renowned for his savage tongue. He dismissed the notable wit and pianist: "There is absolutely nothing wrong with Oscar Levant that a miracle can't fix." He greeted friends: "Hello, Repulsive." When a waiter asked him to repeat his order, he demanded "muffins filled with pus."[11]

His judgments were frequently eccentric. Dorothy Parker once said: "I remember hearing Woollcott say reading Proust is like lying in someone else's dirty bath water. And then he'd go into ecstasy about something called, Valiant Is the Word for Carrie, and I knew I had enough of the Round Table." [12]

Wolcott Gibbs, who often edited Woollcott's work at The New Yorker, was quoted in James Thurber's The Years with Ross on Woollcott's writing:

"Shouts and Murmurs" was about the strangest copy I ever edited. You could take every other sentence out without changing the sense a particle. Whole department [sic], in fact, often had no more substance than a "Talk [of the Town]" anecdote. I guess he was one of the most dreadful writers who ever existed. 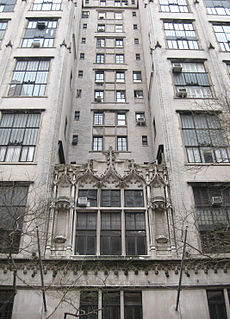 After being kicked out of the apartment he shared with The New Yorker founders Harold Ross and his wife Jane Grant, Woollcott moved first into the Hotel des Artistes on the Upper West Side of Manhattan, then to an apartment at the far end of East 52nd Street. The members of the Algonquin Round Table had a debate as to what to call his new home. Franklin P. Adams suggested that he name it after the Indian word "Ocowoica", meaning "The-Little-Apartment-On-The-East-River-That-It-Is-Difficult-To-Find-A-Taxicab-Near". But Dorothy Parker came up with the definitive name: Wit's End.

Woollcott yearned to be as creative as the people with whom he surrounded himself. Among many other endeavors, he tried his hand at acting and co-wrote two Broadway shows with playwright George S. Kaufman, while appearing in two others. He also starred as Sheridan Whiteside, for whom he was the inspiration, in the traveling production of The Man Who Came to Dinner in 1940.[1] He also appeared in several cameos in films in the late 1930s and 1940s. He was caricatured twice in Warner Brothers cartoons in 1937: as "Owl Kott" in The Woods Are Full of Cuckoos, and as the town crier in Have You Got Any Castles?, playing almost identical roles in each.

Politically, Woollcott called for normalization of U.S.-Soviet relations. He was a friend of reporter Walter Duranty, even though he described him as a "man from Mars."[13] He was also a friend of Soviet foreign minister Maxim Litvinov, and traveled to the USSR in the 1930s, as well as sending his friend Harpo Marx to Moscow on a comedy tour in 1934. Yet he was attacked viciously in the left-wing press after his visit to the Soviet Union for his less than laudatory depiction of the "worker's paradise."

Towards the end of Woollcott's life he semi-retired to Neshobe Island in Lake Bomoseen in Vermont, which he had purchased. Shortly before he died, Woollcott admitted: “I never had anything to say.”[14]

Thurber in The Years With Ross also reports Woollcott describing himself as 'the best writer in America', but with nothing in particular to say; Wolcott Gibbs made a similar criticism of him;[15] both men had a background of journalism and theatrical criticism, their principal literary efforts being judgments upon the efforts of others. Both were reluctant to test their talent with any boldly original work. Woollcott was primarily a storyteller, a retailer of anecdotes and superior gossip, as many of his personal letters reveal.[16] His letters also reveal a warm and generous heart and a self-effacing manner distinct from his waspish public persona, and his many lasting and close friendships with the theatrical and literary elite of his day.

Woollcott was friends with actress Katharine Cornell and it was he who bestowed the moniker "First Lady of the Theatre" upon her.[17] He often gave extremely favorable reviews both to her and to her various productions of her husband, director Guthrie McClintic.

Woollcott was still not saying anything – at great length – when, on January 23, 1943, he appeared on his last radio broadcast,[18] as a participant in a Writers' War Board panel discussion on the CBS Radio program The People's Platform. Marking the tenth anniversary of Adolf Hitler's rise to power, the topic was "Is Germany Incurable?" Panelists included Woollcott, Hunter College president George Shuster, Brooklyn College president Henry Gideonse, and novelists Rex Stout and Marcia Davenport. The program's format began as a dinner party in the studio's private dining room, with the microphones in place. Table talk would lead into a live network radio broadcast, and each panelist would begin with a provocative response to the topic. "The German people are just as responsible for Hitler as the people of Chicago are for the Chicago Tribune," Woollcott stated emphatically, and the panelists noted Woollcott's physical distress.[19] Ten minutes into the broadcast, Woollcott commented that he was feeling ill, but continued his remarks. "It's a fallacy to think that Hitler was the cause of the world's present woes," he said. Woollcott continued, adding "Germany was the cause of Hitler."[20] He said nothing further. The radio audience was unaware that Woollcott had suffered a heart attack. He died at New York's Roosevelt Hospital a few hours later, aged 56,[21] of a cerebral hemorrhage.[22]

At the time of his death, Woollcott had completed the editorial work on his last book, As You Were, an anthology of fiction, poetry and nonfiction for members of the armed forces. The idea of creating a much-needed "knapsack book" for service members reportedly came to Woollcott while he was staying at the White House in November 1942. An experienced anthologist, he drew on the knowledge of soldiers' reading preferences he gained while he was editor of Stars and Stripes during World War I, and also asked for nominations from friends including Stephen Vincent Benét, Carl Sandburg and Mark Van Doren. Like his final radio broadcast, As You Were was a contribution to the war for which Woollcott waived all royalties and planned to donate profits to welfare organizations. The book was published by the Viking Press in March 1943.[24]