Amy Davis Irving (born September 10, 1953) is an American actress. She was nominated for the Academy Award for Best Supporting Actress for Yentl (1983) and for the Golden Globe for Best Actress in a Musical or Comedy for Crossing Delancey (1988). She made her Broadway debut in Amadeus in 1980 and went on to receive an Obie Award for the 1988 Off-Broadway production of The Road to Mecca. Her other film appearances include Carrie (1976), The Fury (1978), Micki & Maude (1984), Anastasia: The Mystery of Anna (1986) and Traffic (2000).

Irving was born in Palo Alto, California. Her father was film and stage director Jules Irving (born Jules Israel) and her mother is actress Priscilla Pointer. Her brother is writer/director David Irving (not the British author of the same name) and her sister is singer/teacher of deaf children Katie Irving. Irving's father was Jewish, as was one of Irving's maternal great-great-grandfathers.[1] Irving was raised in Christian Science, and her family observed no religious traditions.[2]

Irving attended the American Conservatory Theater in San Francisco, in the late 1960s and early 1970s, and appeared in several productions there. She also trained at the London Academy of Music and Dramatic Art, and made her off-Broadway debut at age 17 in And Chocolate on Her Chin. She is a graduate of the Professional Children's School, in Manhattan, New York.

Irving's first stage appearance was at age 2, portraying a bit-part character ("Princess Primrose") in a play which her father directed. She had a walk-on role in the 1965-66 Broadway show The Country Wife at age 12. Her character was to sell a hamster to Stacy Keach in a crowd scene. The play was directed by family friend Robert Symonds, the owner/operator of Lincoln Center, and who would become her stepfather after her father died and her mother remarried. Within six months of returning to Los Angeles from London Academy of Music and Dramatic Art in the mid-1970s, Irving was cast in a major motion picture and was working on various TV projects such as guest spots in Police Woman, Happy Days, and a lead role in the mini-series epic Once an Eagle opposite veterans Sam Elliott and Glenn Ford, and a young Melanie Griffith. She played Juliet in Romeo and Juliet at the Los Angeles Free Shakespeare Theatre in 1975, and returned to the role at the Seattle Repertory Theatre (1982-1983). 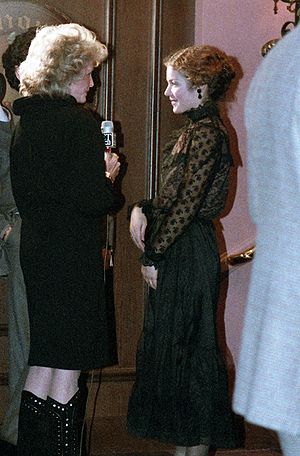 Irving at the opening night for Heartbreak House, December 1983

Irving auditioned for the role of Princess Leia in Star Wars, which went to Carrie Fisher. She then starred in the Brian DePalma-directed films The Fury as Gillian Bellaver, and Carrie as Sue Snell (her mother was also in Carrie). In 1999 she reprised her role as Sue Snell in "The Rage: Carrie 2". She starred with Richard Dreyfuss in 1980 in The Competition. Also in 1980 she appeared in Honeysuckle Rose which also marked her on-screen singing debut. Both her and Dyan Cannon's characters were country-and-western singers, and both actresses did their own singing in the film. In 1983 she featured in Barbra Streisand's directorial debut, Yentl,for which she received an Academy Award nomination for Best Supporting Actress. In 1984 she co-starred in Micki + Maude, In 1988 she was in Susan Sandler's Crossing Delancey (for which she received a Golden Globe nomination). That same year, she also gave another singing performance in the live-action/animated film Who Framed Roger Rabbit, providing the singing voice for Jessica Rabbit. In 1997 she appeared in Woody Allen's Deconstructing Harry. Irving also appeared in the TV show Alias as Emily Sloane, portrayed Princess Anjuli in the big-budget miniseries epic The Far Pavilions and headlined the lavish TV production Anastasia: The Mystery of Anna. More recently Irving appeared in the films Traffic (2000), Tuck Everlasting (2002), Thirteen Conversations About One Thing (2002) and an episode of Law & Order: Special Victims Unit in 2001.

Irving's stage work includes on-Broadway shows such as Amadeus (replacing Jane Seymour due to pregnancy) at the Broadhurst Theatre for nine months, Heartbreak House with Rex Harrison at the Circle in the Square Theatre, Broken Glass at the Booth Theatre and Three Sisters with Jeanne Tripplehorn and Lili Taylor at the Roundabout Theatre. Additional off-Broadway credits include: The Heidi Chronicles, The Road to Mecca, The Vagina Monologues in both London and New York, The Glass Menagerie with her mother, Celadine, a world premiere at George Street Playhouse in New Brunswick, NJ and the 2006 one-woman play A Safe Harbor for Elizabeth Bishop, by Marta Góes, which was a Primary Stages production at the 59E59 Theaters. In 1994, Irving and Anthony Hopkins hosted the 48th Tony Awards at the Gershwin Theatre, New York.

Irving's last Broadway appearance was in the American premiere of Tom Stoppard's The Coast of Utopia at New York's Lincoln Center during its 2006–07 season. In 2009 she played the title role in Saint Joan, in an audio version by the Hollywood Theater of the Ear.

In May 2010 Irving made her Opera Theatre of Saint Louis debut in the role of Desiree Armfeldt in Isaac Mizrahi's directorial debut of Stephen Sondheim's A Little Night Music.

In October 2010 Irving guest-starred in "Unwritten," the third episode of the seventh season, of the Fox series, House M.D..[3] In 2013, Irving appeared in a recurring role in the cancelled Zero Hour.

Irving holds the distinction of being one of only two people to be nominated for both an Oscar and a Razzie Award for the same performance. Irving was nominated for both Best and Worst Supporting Actress for her work in Yentl. Only James Coco achieved the same feat for his work in Only When I Laugh. She was the winner of the category Worst Supporting Actress at the first annual Razzie Awards in 1981 for her film Honeysuckle Rose, beating actresses including Betsy Palmer for Friday the 13th and Elizabeth Ashley for Windows.

Irving dated American film director Steven Spielberg from 1976 to 1980. She then had a brief relationship with Willie Nelson, her co-star in the film Honeysuckle Rose. The breakup with Spielberg cost her the role of Marion Ravenwood in Raiders of the Lost Ark, which he had offered to her at the time,[4] but they soon got back together and finally married from 1985 to 1989; upon their divorce she received an estimated $100 million settlement after a judge controversially vacated a prenuptial agreement that had been written on a napkin. In 1990 she became romantically and professionally involved with Brazilian film director Bruno Barreto; they were married in 1996 and divorced in 2005. She has two sons, Max Samuel (with Spielberg) (born June 13, 1985), and Gabriel Davis (with Barreto) (born May 4, 1990). She is married to Kenneth Bowser, Jr., a documentary film maker, most notable for making Easy Riders, Raging Bulls: How the Sex, Drugs and Rock 'N' Roll Generation Saved Hollywood, an adaptation of a book by Peter Biskind.