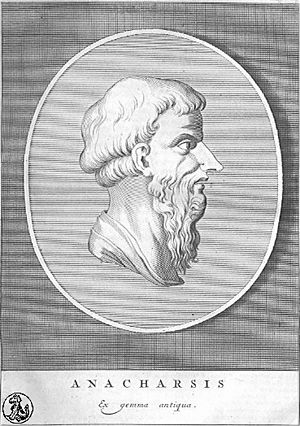 18th-century portrait, based on an ancient engraved gem.

Anacharsis (/ˌænəˈkɑːrsɪs/; Greek: Ἀνάχαρσις) was a Scythian philosopher who travelled from his homeland on the northern shores of the Black Sea to Athens in the early 6th century BC and made a great impression as a forthright, outspoken "barbarian". Reputedly a forerunner of the Cynics, none of his works has survived.

Anacharsis the son of Gnurus,[1] a Scythian chief, was half Greek and from a mixed Hellenic culture, apparently in the region of the Cimmerian Bosporus. He left his native country to travel in pursuit of knowledge, and came to Athens about 589 BC,[2] at a time when Solon was occupied with his legislative measures.

According to the story recounted by Hermippus,[3] Anacharsis arrived at the house of Solon and said, "I have traveled here from afar to make you my friend." Solon replied, "It's better to make friends at home." Thereupon the Scythian replied, "Then it is necessary for you, being at home, to make friends with me." Solon laughed and accepted him as his friend.

Anacharsis cultivated the outsider's knack of seeing the illogic in familiar things. For example, Plutarch remarks that he "expressed his wonder at the fact that in Greece wise men spoke and fools decided."[4] His conversation was droll and frank, and Solon and the Athenians took to him as a sage and philosopher. His rough and free discourse became proverbial among Athenians as 'Scythian discourse'.[5]

Anacharsis was the first foreigner (metic) who received the privileges of Athenian citizenship. He was reckoned by some ancient authors as one of the Seven Sages of Greece,[6] and it is said that he was initiated into the Eleusinian Mysteries of the Great Goddess, a privilege denied to those who did not speak fluent Greek.

According to Herodotus,[7] when Anacharsis returned to the Scythians he was killed by his own brother for his Greek ways and especially for the impious attempt to sacrifice to the Mother Goddess Cybele, whose cult was unwelcome among the Scythians. 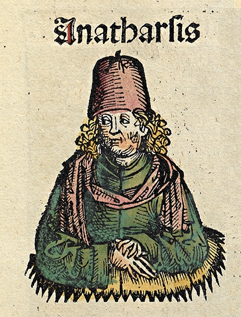 Anacharsis, depicted as a medieval scholar in the Nuremberg Chronicle

None of the works ascribed to him in ancient times, if indeed they were written by him, have survived. He was said to have written a book comparing the laws of the Scythians with the laws of the Greeks, as well as work on the art of war. All that remains of his thought is what later tradition ascribes to him. He became famous for the simplicity of his way of living and his acute observations on the institutions and customs of the Greeks. He exhorted moderation in everything, saying that the vine bears three clusters of grapes: the first wine, pleasure; the second, drunkenness; the third, disgust.[8] So he became a kind of emblem to the Athenians, who inscribed on his statues: 'Restrain your tongues, your appetites, your passions.'

There are ten extant letters ascribed to him, one of which is also quoted by Cicero:

Greetings from Anacharsis to Hanno: My clothing is a Scythian cloak, my shoes are the hard soles of my feet, my bed is the earth, my food is only seasoned by hunger - and I eat nothing but milk and cheese and meat. Come and visit me, and you will find me at peace. You want to give me something. But give it to your fellow-citizens instead, or let the immortal gods have it.[9]

All of the letters are spurious.[10] The first nine probably date from the 3rd century BC, they are usually included among the Cynic epistles, and reflect how the Cynic philosophers viewed him as prefiguring many of their ideas;[10] the tenth letter is quoted by Diogenes Laertius, it is addressed to Croesus, the proverbially rich king of Lydia, it too is fictitious:

Anacharsis to Croesus: O king of the Lydians, I am come to the country of the Greeks, in order to become acquainted with their customs and institutions; but I have no need of gold, and shall be quite contented if I return to Scythia a better man than I left it. However I will come to Sardis, as I think it very desirable to become a friend of yours.[11]

Having been informed that Solon was employed to draw up a code of laws for the Athenians, Anacharsis described his occupation, saying:

"Laws are spider-webs, which catch the little flies, but cannot hold the big ones."[12]

Revival in the 18th century

In 1788 Jean Jacques Barthelemy (1716–95), a highly esteemed classical scholar and Jesuit, published The Travels of Anacharsis the Younger in Greece, about a young Scythian descended from Anacharsis. The 4-volume work was an imaginary travel journal, one of the first historical novels, which Klemperer called "the encyclopedia of the new cult of the antique" in the late 18th century.[13] It had an impact on the growth of philhellenism in France at the time. The book went through many editions, was reprinted in the United States and translated into German and other languages. It later inspired European sympathy for the Greek struggle for independence and spawned sequels and imitations through the 19th century.