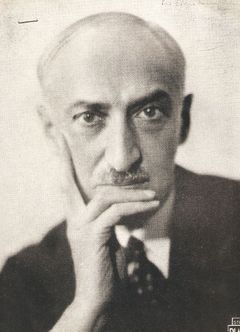 Maurois was born on 26 July 1885 in Elbeuf and educated at the Lycée Pierre Corneille in Rouen,[1] both in Normandy. A member of the Javal family, Maurois was the son of Ernest Herzog, a Jewish textile manufacturer, and his wife Alice Lévy-Rueff. His family had fled Alsace after the Franco-Prussian War of 1870–71 and took refuge in Elbeuf, where they owned a woollen mill.[2] As noted by Maurois, the family brought their entire Alsatian workforce with them to the relocated mill, for which Maurois' grandfather was awarded the Legion of Honour for having "saved a French industry".[3] This family background is reflected in Maurois' "Bernard Quesnay" - the story of a young World War I veteran with artistic and intellectual inclinations who is drawn, much against his will, to work as a director in his grandfather's textile mills - a character clearly having many autobiographical elements.[4][5]

During World War I he joined the French army and served as an interpreter and later a liaison officer with the British army. His first novel, Les silences du colonel Bramble, was a witty and socially realistic account of that experience. It was an immediate success in France. It was translated and became popular in the United Kingdom and other English-speaking countries as The Silence of Colonel Bramble. Many of his other works have also been translated into English,[6] as they often dealt with British people or topics, such as his biographies of Disraeli, Byron, and Shelley. 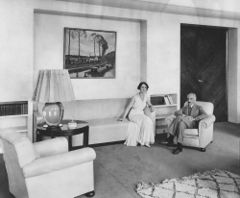 André Maurois and his wife. Photo by Jean Collas

In 1938 Maurois was elected to the prestigious Académie française. He was encouraged and assisted in seeking this post by Marshal Philippe Pétain, and he made a point of acknowledging with thanks his debt to Pétain in his 1941 autobiography, "Call no man happy" – though by the time of writing their paths had sharply diverged, Pétain having become Head of State of Vichy France.

When World War II began, he was appointed the French Official Observer attached to the British General Headquarters. In this capacity he accompanied the British Army to Belgium. He knew personally the main politicians in the French Government, and on 10 June 1940 he was sent on a mission to London. The Armistice ended that mission. Maurois was demobilised and travelled from England to Canada. He wrote of these experiences in his book, Tragedy in France.[7]

Later in World War II he served in the French army and the Free French Forces.

His Maurois pseudonym became his legal name in 1947. 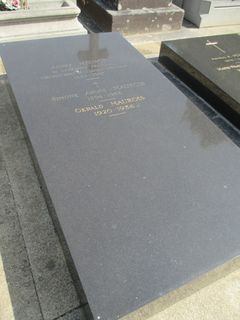 Maurois's first wife was Jeanne-Marie Wanda de Szymkiewicz, a young Polish-Russian aristocrat who had studied at Oxford University. She had a nervous breakdown in 1918 and in 1924 she died of septicemia. After the death of his father, Maurois gave up the family business of textile manufacturing (in the 1926 novel "Bernard Quesnay" he in effect described an alternative life of himself, in which he would have plunged into the life of a textile industrialist and given up everything else all other things).

Maurois's second wife was Simone de Caillavet, the granddaughter of Anatole France's mistress Léontine Arman de Caillavet. After the fall of France in 1940, the couple moved to the United States to help with propaganda work against the Nazis.[2]

Jean-Richard Bloch was his brother-in-law.[8]

An Imaginary Interview
Reality Transposed
Darling, Good Evening!
Lord of the Shadows
Ariane, My Sister...
Home Port
Myrrhine
Biography
Thanatos Palace Hotel (adapted as an episode of The Alfred Hitchcock Hour)
Friends
Dinner Under the Chestnut Trees
Bodies and Souls
The Curse of Gold
For Piano Alone
The Departure
The Fault of M. Balzac
Love in Exile
Wednesday's Violets
A Career
Ten Year Later
Tidal Wave
Transference
Flowers in Season
The Will
The Campaign
The Life of Man
The Corinthian Porch
The Cathedral
The Ants
The Postcard
Poor Maman
The Green Belt
The Neuilly Fair
The Birth of a Master
Black Masks
Irène
The Letters
The Cuckoo
The House