An archdeacon is a senior clergy position in the Chaldean Catholic Church, Anglican Communion, Syrian Malabar Nasrani, Eastern Orthodox churches and some other Christian denominations, above that of most clergy and below a bishop. In the High Middle Ages it was the most senior diocesan position below a bishop in the Roman Catholic Church. An archdeacon is often responsible for administration within an archdeaconry, which is the principal subdivision of the diocese. The Oxford Dictionary of the Christian Church has defined an archdeacon as "A cleric having a defined administrative authority delegated to him by the bishop in the whole or part of the diocese."[1] The office has often been described metaphorically as that of oculus episcopi, the "bishop's eye".[2]

In the Catholic Church, the post of archdeacon, generally a priest, was once one of great importance as a senior official of a diocese. The duties are now performed by officials such as auxiliary and/or coadjutor bishops, the vicar general, and the episcopal vicars. The title remains.

The term "archdeacon" appears for the first time in Optatus of Mileve's history of Donatism of about 370, in which he applies it to someone who lived at the beginning of that century. From the office of the diaconus episcopi, a deacon whom the bishop selected to administer the church's finances under the bishop's personal direction, the office of archdeacon gradually developed, as certain functions were reserved to him by law. These functions included not only financial administration but also the discipline of the clergy, and examination of candidates for priesthood. From the 8th century, there was in the West a further development of the authority of the archdeacon, who now enjoyed a jurisdiction independent of the bishop. Large dioceses had several archdiaconates, in each of which the archdeacon, generally a priest, had an authority comparable to that of the bishop. Frequently they were appointed not by the bishop but by the cathedral chapter or the king. However, from the 13th century, efforts were made to limit their authority. This was effected in part by the institution of the new office of vicar general. In 1553, the Council of Trent removed entirely the independent powers of archdeacons. Those who had been in charge of different parts of the diocese gradually ceased to be appointed. Only the archdeacon associated with the cathedral chapter continued to exist as an empty title, with duties almost entirely limited to liturgical functions.[3][4]

Archdeacons serve the church within a diocese by taking particular responsibility for buildings, including church buildings, the welfare of clergy and their families and the implementation of diocesan policy for the sake of the Gospel within an archdeaconry.[7] An archdeaconry is a territorial division of a diocese; these vary in number according to the size of the diocese and in a few cases an assistant bishop in a diocese will also fulfil the duties of an archdeacon in part of it, as in the Archdeaconry of Bodmin 1953–62 (the Archdeaconry of Bodmin is one of two archdeaconries in the Diocese of Truro). Recently, this type of dual role has only existed in the Bishop suffragan(-Archdeacon) of Ludlow.

In some other Anglican churches archdeacons can be deacons instead of priests; such archdeacons often work with the bishop to help with deacons' assignments to congregations and assist the bishop at ordinations and other diocesan liturgies. The Anglican ordinal presupposes that the functions of archdeacons include those of examining candidates for ordination and then presenting them to the ordaining bishop.[1] In some parts of the Anglican Communion where women cannot be consecrated as bishops, the position of archdeacon is effectively the most senior office a female cleric can hold: this being the current situation, for example, in the Anglican Diocese of Sydney.[8]

Very rarely, "lay archdeacons" have been appointed, most notably in the case of the former Anglican Communion Observer to the United Nations, Archdeacon Taimalelagi Fagamalama Tuatagoloa-Leota, who retained her title having served as Archdeacon of Samoa. 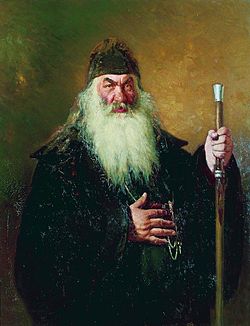 In the Eastern Christian churches (Eastern Orthodox Church and Eastern Catholic Churches), an archdeacon is the senior deacon within a diocese and has responsibility for serving at hierarchical services (those at which the bishop is present and presiding). He has responsibility for ensuring the smooth running of the service by directing the clergy and servers as appropriate. As such, he usually travels with the ruling bishop to various parts of the diocese, and will sometimes act as his secretary and cell attendant, ensuring that he is able to balance his monastic life with his hierarchical duties. The archdeacon wears the double orarion, which is twice the length of the usual orarion, and wraps under the right arm as well as hanging from the left shoulder. An archdeacon may come from either the monastic or married clergy.

A protodeacon also wears the double orarion, although he is distinguished from the archdeacon in that he is the senior deacon at a cathedral or other principal church within a diocese and serves as the principal deacon when a number of deacons serve together.

According to the traditional structure, the Indian diocese of the Church of the East was governed by a metropolitan sent by the Catholicos Patriarch, from Seleucia-Ctesiphon. At the same time, on the local level, in India, church affairs were governed by the Malabar Assembly. There was also an indigenous head of the Church of Malabar, which, according to historians, means the “head of the caste”, that is the head of the St Thomas Christians but also the “Archdeacon of All India”. Apparently, in his person an indigenous function, characteristic of the St Thomas Christian community, was combined with an existing function of the Church of the East. Patriarch Timothy (780–826) of Persia called him the head of the faithful in India.

According to the canons of the Eastern churches, an archdeacon is the highest priestly rank: he is the head of all the clerics belonging to a bishopric; he is responsible for the whole worship of the cathedral church and represents the will of the bishop in his absence. One clearly understands how the appointment of an indigenous Archdeacon of All India served the needs of the ecclesiastical organisation of the Church of the East. While the Catholicos Patriarch of Seleucia-Ctesiphon reserved for himself the right to send his own prelates originating from Iraq to the Indian diocese, the continuous governance of his Indian flock was secured by the indigenous Archdeacon serving as the head of all the priests in Malabar and representing the bishop’s will.

However, from the local point of view, the rank of an archdeacon was more important than this; not only was he the most important priest of the community, but he also fulfilled the role of an Ethnarch. He was the “prince and head of the Christians of Saint Thomas” and had such titles as “Archdeacon and Gate of All India, Governor of India.” The origin and the meaning of the term “gate” is mysterious. One might suppose that it is a Christological title: “I am the Gate of the sheep” (Gospel of John 10:7).

While originally an archdeacon in the Church of the East was elected by the bishop according to merit, the office of the Archdeacon of India seems to have been hereditary. It was the privilege of the Pakalomattam family, at least from the sixteenth century onwards. Indeed, we know about a number of Pakalomattam Archdeacons, beginning with 1502, when Metropolitan John of India appointed George Pakalomattam. The name of the family varies, and the family seems to be identical with the Parambil family, translated into Portuguese as ‘de Campo’.

An archdeacon had all the attributes of a secular leader and was normally escorted by a number, sometimes several thousands, of soldiers. It is important to note that while there could be several bishops appointed for the Malabar Diocese, there was always only one archdeacon, a custom contrary to the canons of the Church of the East. This situation is best explained by the fact that from the point of view of the East Syrian Church structure the archdeacon was an ecclesiastical function, but from that of the St Thomas Christian community it was also a socio-political, princely function, representing the unity of the Christian nation, or caste(s), of Hendo (India).