Ridolfo "Aristotele" Fioravanti (c. 1415 or 1420 in Bologna – c. 1486) was an Italian Renaissance architect and engineer. His surname is sometimes given as Fieraventi. Russian versions of his name are Фиораванти, Фьораванти, Фиеравенти, Фиораванте. 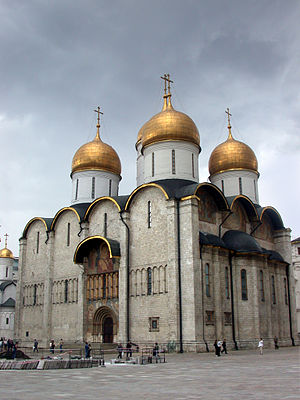 Little is known about Fioravanti's early years. He was born in Bologna around 1415/1420 to a family of architects and hydraulic engineers.

He became renowned for the very innovative devices he used for the rebuilding of the towers belonging to the noble families of the city. Between 1458 and 1467 he worked at Florence for Cosimo de' Medici the Elder and at Milan, before returning to his native city. Here he created the plans for the Palazzo Bentivoglio, but the edifice was not finished (by Giovanni II Bentivoglio) until 1484-1494. In 1467 he worked for king Matthias Corvinus in Hungary.

In 1475 at the invitation of Ivan III he went to Russia, and built the magnificent Dormition Cathedral in Moscow from 1475-1479,[1] taking inspiration from the eponymous cathedral in Vladimir. This is the work for which he is best remembered.

According to some accounts, he was thrown into prison by Ivan III when he asked to return to Italy, and died in captivity.[2] According to other accounts, he participated as a military engineer and artillery commander in the campaigns against Novgorod (1477-1478), Kazan (1482) and Tver (1485).[3]