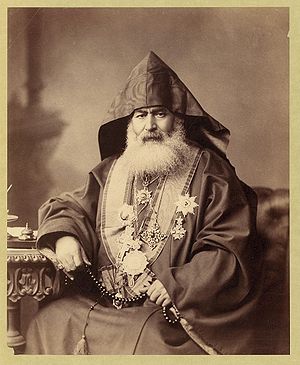 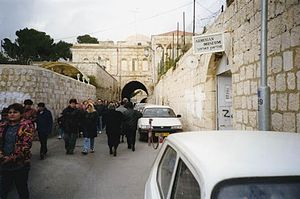 The Street of Armeniam Patriarchate 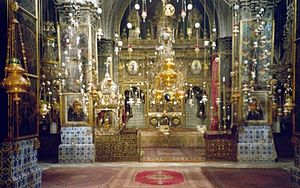 Archbishop Nourhan Manougian, at that time the Grand Sacristan and the Patriarchal Vicar of the Patriarchate, was elected as the 97th Armenian Patriarch of Jerusalem on January 24, 2013.[1] Manougian succeeded Archbishop Torkom Manoogian, who died on October 12, 2012 after serving 22 years in the office. The Patriarch, along with a Synod of seven clergymen elected by the St. James Brotherhood, oversees the Patriarchate's operations.

As a result of the persecution of Armenians by Turkey during World War I, the Armenian population of Jerusalem reached 25,000 people. But political and economic instability in the region have reduced the Armenian population. Most Armenians in Jerusalem live in and around the Patriarchate at the Sts. James Monastery, which occupies most of the Armenian Quarter of the Old City. Apart from Jerusalem, there are Armenian Communities in Jaffa, Haifa and Nazareth, and in the Palestinian Territories. Most Armenians living previously in the West Bank, however, have left the country.

The Jerusalem Armenian community uses the Julian calendar, unlike the rest of the Armenian Church and other Eastern Orthodox Churches which use the Revised Julian calendar.[2]

In 638, after Saint Sophronius died and the Greeks did not appoint another bishop for Jerusalem, the Armenian Apostolic Church began appointing its own bishops for Jerusalem. The office has continued, with some interruptions, down to this day. The Bishops were later elevated in stature and became Patriarchs. The Armenian Patriarch is independent and self-governing. The Armenian Patriarch of Jerusalem is therefore not under the ecclesiastic authority of the Catholicos of Armenia.

After the end of the Crusader period, the Armenian Patriarchs sought to establish good relations with the Muslim rulers. The Armenian Patriarch Sarkis I (1281–1313) met the Mamluk governor in Egypt and subsequently returned to his community in Jerusalem, hoping to usher in a period of peace for his people after the Crusades. In the 1340s the Armenians were permitted to build a wall around their quarter. The Mamluk government also engraved a protective declaration in Arabic on the western entrance to the quarter.

The Armenian quarter in this period kept creating "facts on the ground" by the constant small expansions and consolidations. In the 1380s Patriarch Krikor IV built a priests' dining room across from the St. James Cathedral. Around 1415 the olive grove near the Garden of Gethsemane was purchased. In 1439, Armenians were removed from the Golgotha chapel, but the Patriarch Mardiros I (1412–1450) purchased the “opposite area” and named it second Golgotha. This remains in the Patriarch's possession to this day.

In the 17th century, the Armenians were allowed after much pleading to enlarge the St. James Monastery. At the same time the Armenian Patriarch Hovhannes VII purchased a large parcel of land south of the St. James Cathedral, called “Cham Tagh”. By 1752 the Patriarchate was busy renovating the entire quarter, and in 1828 further renovations took place after an earthquake. In 1850 the seminary complex at the south end of the St. James convent was completed.

In 1833, the Armenians established the city’s first printing press, and opened a theological seminary in 1843. In 1866, the Armenians had inaugurated the first photographic studio and their first newspaper in Jerusalem. In 1908, the Armenian community built two large buildings on the north-western side of the Old City, along Jaffa Street.

As the Armenian diaspora spread throughout Europe and America, wealthy Armenians donated generously for the prosperity and continuity of the Patriarchate. The oil magnate and philanthropist Calouste Gulbenkian came to endow the Gulbenkian Library in the Armenian quarter that was named in gratitude in his name, today holding one of the great collection of ancient Armenian manuscripts including endless copies of the various Firmens, Ottoman edicts that granted the quarter protection and rights under Muslim rule.

By the 1920s, most of the Armenian quarter had “European style gable roofs” as opposed to the domes preferred in the Muslim quarter. In 1922 Armenians made up 8% of Jerusalem’s Christians, bringing their total number to about 2,480 people. It is also noted that non-Armenians found comfort in the protection of the walled Armenian "compound". In the 1930s and 1940s, the Armenian quarter saw further renovations.

The end of World War II brought also the division of Mandate Palestine and the establishment in 1948 of Israel. The numbers of Armenians residing at the time in the Holy Land totaled about 8,000. The Armenians who lived in Haifa and Jaffa, which became part of Israel, got the Israeli citizenship; whereas the huge majority of Palestinian Armenians lived in the Armenian Quarter, and the Armenian Patriarchate and its properties came under Jordanian rule.

The Armenian community was further reduced after the 1967 Six-Day War and occupation, with many emigrating to Jordan and some to Europe and the United States, leaving around 2,000-3,000 in Jerusalem and the West Bank.

The Armenian Patriarchate of Jerusalem is the home of the Brotherhood of the St. James, a monastic order of the Armenian Apostolic Church with about 60 members worldwide. Within the compound of the Patriarchate, also lie the private residences of Armenian families.

This residential enclave was, at one time, the largest single compound that housed Armenian pilgrims, and represented the demographic and spiritual core of the newly established colony.

The compound of the Patriarchate, which enforces a strict curfew of 10 p.m. when the massive doors are closed and locked until the early morning, also houses the administrative offices and residences of the Patriarch and the clergy. It also comprises:

Other branches of the Patriarchate located within the compound include:

The Patriarchate also runs a printing press, the first to be established in Jerusalem, which has now become a modern, state-of-the-art facility capable of undertaking commercial color printing. This was the first facility within the Armenian compound to adopt the concept of computerization on a dedicated scale.

Medical services against a symbolic fee are provided at a clinic donated by the Jinishian Medical Fund.

Free meals to the aged and invalid pensioners and indigent members of the community are also provided.

Jurisdiction outside the Patriarchate complex

The Patriarchate enjoys a semi-diplomatic status and is one of the three major guardians of the Christian Holy Places in the Holy Land (the other two are the Orthodox and Latin Patriarchates). Among these sites under joint control of the Armenian Patriarchate and other churches, chapels and holy places are: