Athelstaneford /ˈæθəlsteɪnfərd/ (Scots: Atholstanefuirdcode: sco is deprecated [1] or Elshinthurd)[2] is a village in East Lothian, Scotland. It is near the town of Haddington and lies about 20 miles east of Edinburgh.

According to popular legend, Athelstaneford is where the original Scottish saltire - the white diagonal cross on a sky blue background - was first adopted. On the eve of a battle between an army of the Picts and invading Angles from Northumbria in 832AD, Saint Andrew, who was crucified on a diagonal cross, came to the Pictish King Óengus II in a vision promising victory. The next morning the Picts saw a white cross formed by clouds in the sky. They won the battle and attributed their victory to the blessing of Saint Andrew, adopting his form of the cross as their flag, and naming him as their patron saint.[3] The leader[4] of the retreating Angles, "Athelstan",[5] was slain at a nearby river crossing, hence the name Athelstaneford. There are several versions of the tale, of which this is one of the more popular. Whatever the truth, the legend has cemented Athelstaneford's place in Scotland's history.

However, there is doubt as Æthelstan, King of the Angles [c. 827-840s], was based in East Anglia and would have had no reason to invade Scotland, with the added problem of having to travel through Northumbria which was then ruled by King Eanred. There is no known record in Northumbrian history of this happening. Another explanation is that the village is named after the Anglo-Saxon King Æthelstan (grandson of Alfred the Great), who would have travelled through the area when he invaded Scotland in 934 AD to successfully obtain the submission of the Scottish King Constantine II.

The village is home to the National Flag Heritage Centre which occupies a lectern doocot built in 1583 and rebuilt in 1996. It is at the back of the village church.[6] 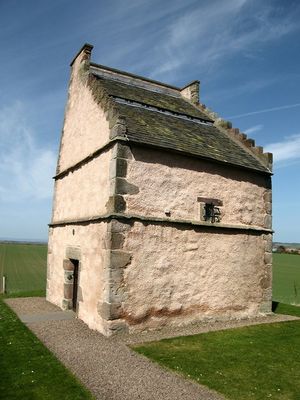 Athelstaneford Heritage Centre is housed in a Doocot built in 1583

Today the village is surrounded by farmland and has little in the way of amenities. Tourists can follow the "Saltire Trail", a road route which passes by various local landmarks and places of historical interest.

Athelstaneford Parish Kirk has a connection with the author Nigel Tranter who was a prominent supporter of the Scottish Flag Trust. He married in the church, and in April 2008 a permanent exhibition of his memorabilia was mounted in the north transept of the church. Items include a copy of Nigel Tranter's old typewriter, a collection of manuscripts and books, and other personal items. The display was previously at Lennoxlove House, and prior to that at Abbotsford House, the home of Sir Walter Scott.