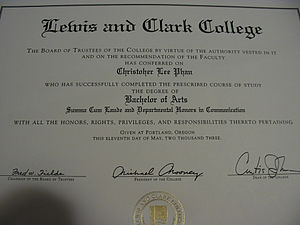 A certificate or diploma evidencing the granting of a bachelor's degree

A Bachelor of Arts (BA, B.A., AB or A.B.), from the Latin artium baccalaureus is a bachelor's degree awarded for an undergraduate course or program in either the liberal arts, the sciences, or both. Bachelor of Arts degree programs generally take three to four years depending on the country, academic institution, and specific specializations, majors or minors. The word baccalaureus or baccalarium (from the Latin bacca, a berry, and laureus, "of the bay laurel") should not be confused with baccalaureatus (translatable as "gold-plated scepter" by using the Latin baculum and aureatus), which refers to the one- to two-year postgraduate Bachelor of Arts with Honours degree (Baccalaureatus in Artibus Cum Honore) in some countries.

Diplomas generally give the name of the institution, signatures of officials of the institution (generally the president or rector of the university as well as the secretary or dean of the component college), the type of degree conferred, the conferring authority and the location at which the degree is conferred. Degree diplomas generally are printed on high quality paper or parchment; individual institutions set the preferred abbreviation for their degrees.[1]

They generally last three years in nearly all of the European Union, and in Albania, Australia, Bosnia and Herzegovina, India, Israel, New Zealand, Iceland, Norway, Singapore, the Caribbean, South Africa, Switzerland, and the Canadian province of Quebec.

In colleges and universities in Australia, New Zealand, Nepal and South Africa, the BA degree can be taken over three years of full-time study.[3] Students must pursue at least one major area of study, and units from that subject are usually studied in each year, though sometimes students may choose to complete upper level classes in the same year and thus can leave space for elective subjects from a different field. At some universities students may choose to pursue a second major; alternatively, the remainder of the degree is taken up with a minor area of study (in the first two years) and other individual or stream-based subjects make up the degree.

Unlike in other countries, students do not receive an overall grade for their Bachelor of Arts degree with varying levels of honours ("honours" is a distinction but not part of the degree itself). Qualified students may be admitted, after they have achieved their (general) Bachelor's program with a high overall grade point average, to a further one year Bachelor (with) Honours degree program ((with) Honours is part of the degree itself). Thus, to achieve a Bachelor (with) Honours degree (abbr. e.g. BA (Hons.) or BA hons.), an extra "postgraduate" year and a high research honour's thesis must be completed; see Honours Degrees. A student who holds a (with) Honours degree is eligible for direct entry to either a Doctorate (Ph.D.) or a very high research Master´s degree program.

In general, in all four countries the B.A. degree is the standard required for entry into a master's programme. In science, a BA hons degree is generally a prerequisite for entrance to a Ph.D programme or a very-high-research-activity master´s programme. As such, for example the UK awarded honours are designed and should not be confused with Canadian, Australian, New Zealand and South African awarded BA hons/BA (Hons) degree.

For further clarification, in other countries the so-called honours bachelor may not be an actual degree, but the name of a (vocational) programme which can be completed through specified course work, a high grade average, and the completion of possibly a short paper or project; students who completed such a honours BA programm sometimes style themselves by '(Hon)' after the degree abbreviation without a space, in parentheses and after the 'Hon(s)' without a dot, for example 'B.A.(Hon)'. The 3 and 4 year B.A. degree is also accepted for entry into graduate professional programmes such as law or an M.B.A. program.

In the Netherlands, the Bachelor of Arts and Master of Arts degrees were introduced in 2002. Until then there was a single program which led to the doctorandus degree. This comprised the same course load as the Bachelor and Master programs combined. (The title doctorandus was used in almost all fields of study; other titles were used for legal studies (meester) and engineering (ingenieur).) Those who had already started the doctorandus program could, on completing it, opt for the doctorandus degree (entitling them to use "Drs." in front of their name), or could use the master's degree (post-nominal letters) in accordance with the new standard. A similar practice has been introduced in other EU countries, according to the Bologna Process.

In the United Kingdom (excluding Scotland) and Ireland, the first degree course normally lasts three years, but nomenclature varies: 19th-century and later universities usually distinguish between arts and sciences subjects by awarding either a B.A. or B.Sc. degree. However, some older or ancient universities, such as Oxford, Cambridge[citation needed] and Dublin traditionally award B.A.s to undergraduates having completed the final examinations, e.g. Part II Tripos (Cambridge), Final Honour Schools (Oxford), Moderatorship (Dublin), in most subjects including the sciences. Some new plate glass universities established in the 1960s, such as York and Lancaster originally followed the practice of Oxford and Cambridge by awarding B.A.s in all subjects, but have since changed to awarding B.Sc. degrees in science subjects. At Oxford, Cambridge and Dublin the degree of M.A. can be claimed, usually 21 terms after matriculation. For many centuries, the bachelor's degree was an intermediate step and was awarded for much of the work carried out in later times at secondary schools. The names of the final secondary school exams in France and Spain (and increasingly in the UK—the International Baccalaureate) come from this: le Baccalauréat and el Bachillerato, respectively.

The Ancient Universities of Scotland award a Master of Arts degree to humanities or arts graduates, but a B.Sc. to science graduates. This course takes four years for an honours degree and three for an ordinary (in Scotland it is possible to opt to take an ordinary degree rather than this simply ranking below a third class honours).

A Bachelor of Arts is entitled to the designation B.A. for an ordinary/pass degree and B.A. (Hons) for an honours degree. Students who completed an honours B.A. sometimes style themselves by '(Hon)' or '(Hons)' after the degree abbreviation in parenthesizes. An honours degree is always awarded in one of four classes depending upon the marks gained in the final assessments and examinations. The top students are awarded a first-class degree, followed by an upper second-class degree (usually referred to as a 2:1), a lower second-class degree (usually referred to as a 2:2), and those with the lowest marks gain a third-class degree. An ordinary or unclassified degree (which does not give the graduate the right to add '(Hons)') may be awarded if a student has completed the full honours degree course but has not obtained the total required passes sufficient to merit a third-class honours degree. Typically these degrees lack the last year requirement of a dissertation.

In the United States, the Bachelor of Arts (B.A.) or Artium Baccalaureus (A.B.) is one of two basic undergraduate degrees. The other is the Bachelor of Science. At most institutions, the B.A. and B.S. have all but identical requirements with regard to the 120–128 semester hours or 180–192 quarter hours for a basic undergraduate degree. Curricula leading to the B.A., however, often require a certain minimum number of the total degree credits be drawn from coursework in topical areas historically associated with the liberal arts—such as language, literature, humanities, mathematics, history, museum studies, physical sciences, and social sciences. At Eastern Michigan University, for example, 75 of the minimum 124 credits must be earned in these subject areas—regardless of what the student may choose as a major or minor subject—including one year of study over two consecutive semesters of one foreign language. Until recently, many major universities in the United States required a student to complete a certain number of credit hours while attending campus-based courses. With the emergence of E-learning, residency requirements are losing popularity as educational institutions are expanding their ability to offer online degrees at all postsecondary education levels.[citation needed]