Barrie is one of the seven train lines of the GO Transit system in the Greater Toronto Area, Ontario, Canada. It extends from Union Station in Toronto in a generally northward direction to Barrie, and includes ten stations along its 63 miles (101.4 km) route.[2] From 1982 to 1990 and again from 1993 to 2007, it was known as the Bradford line, as that community constituted the line's terminus during those periods.

The Barrie Line is the oldest railway in Ontario, with passenger service beginning in 1853.[3]

In 1852, construction began on the Ontario, Simcoe and Huron Railway, which would run from Toronto to Collingwood.[4] The line opened on May 16, 1853, when passenger train service began operating between Toronto and Aurora (then Machell's Corners).[3] On October 11, 1853, service was extended to Allandale, then opposite Barrie on the south shore of Kempenfeldt Bay.[5]

In 1968, MPP William Hodgson introduced a private member's bill to move that the government of Ontario establish GO Transit services north of Metro Toronto.[6] That year, a community group known as the GO North Committee distributed "GO North" stickers for motorists to adhere to their automobile's windshield to advocate for GO Transit commuter rail service north of Toronto.[7]

Planning for commuter services resulted in the establishment of the Newmarket Bus Terminal by 1970, from which commuters would be taken to the Richmond Hill GO Station to commute to Toronto.[8]

John Crawford Medcof, operating a company named Railroad Boosters, rented a train for one-day service between Barrie and Toronto on 16 October 1969,[9][10] earning a profit.[11] He gave the proceeds to the government of Ontario to support a north GO train service promised by John Robarts in late 1969, but asked for the government to return the money when the provincial government announced it would not establish a Richmond Hill line service in 1970.[12][10] He applied for a grant of CA$97,200 from the federal government to operate a commuter train for twelve weeks, with one train leaving Barrie in the morning for Toronto, and a return trip at night.[11] The grant was approved per the government's local initiatives program in December 1971.[11] The train was operated by Canadian National Railways, and charged the same fares as those for the GO Transit bus service.[11] Another trial commuter service from Barrie to Toronto was operated in late 1972, carrying 13,483 passengers.[13]

In 1973, the Canadian Transport Commission held a public hearing at Georgian College[13] during which its three-member committee heard presentations from Medcof and councillors from all "municipalities between Toronto and Barrie".[14] All presentations favoured the creation of commuter train service between the two cities, including that of York—Simcoe MP Sinclair Stevens.[14]

On April 1, 1972, CN introduced commuter service from Barrie to Toronto, as required by the Canadian Transport Commission. The service was transferred to Via Rail in 1978.[15] As a result of federal government financial cutbacks to Via Rail, the service was transferred to the provincial government and integrated into the GO Transit network on September 7, 1982, but service only extended to Bradford.[15] On September 17, 1990, the line was extended to Barrie, but was again cut back to Bradford on July 5, 1993.

In 2006, the number of daily trains on the line was expanded to four in each direction.[18] The change also affected connecting bus lines with links to the train line, such as the GO bus service from Barrie and Keswick.

In 2006, GO Transit built a bridge at the Snider diamond,[19] which is the junction between the Barrie Line and Canadian National's primary east-west freight line, the York Subdivision. Since CN controlled both corridors, the passage of passenger trains over the diamond was often delayed by freight trains passing through the intersection. Constructing the bridge and associated trackage resulted in a grade separation of the two lines, eliminating such delays. Construction of the bridge began in February 2006, and the bridge was opened on December 2006. The entire project was completed on June 2007.[20]

On December 17, 2007, the Bradford Line was extended to the new Barrie South GO Station and was renamed the "Barrie Line".[21] Construction had begun on February 2, 2007 to construct the new Barrie South station, a new layover facility and new tracks, signals and crossings along the existing 20 kilometres (12 mi) railway corridor. The project cost $25 million, funded by two thirds by the federal and provincial governments, and one third by the City of Barrie.[22]

On December 15, 2009, Metrolinx purchased the lower part of the Newmarket subdivision in central-north Toronto from CN for $68 million. The Barrie line trackage, from Union Station to Barrie, is now fully owned by Metrolinx. As part of the agreement, the Canadian National Railway continues to serve five freight customers located on the Newmarket subdivision between Highway 401 and the CN York Subdivision.

On January 30, 2012, the Barrie line was extended north to the newly constructed Allandale Waterfront GO Station.[23]

In the summer of 2012, a pilot train service was introduced on weekends and holidays between June and September.[24] Two trains in each direction completed the entire route, while an additional four trains ran between Union Station and East Gwillimbury GO station.[25] The summer service cost CA$520,000 to operate, including train crews, safety and enforcement, station staffing and fuel.[26] Bidirectional weekend service was offered again in summer 2013, with four trains in each direction covering the entire route from Toronto to Barrie, making all stops and having a bus connection at Rutherford GO Station for non-stop service to Canada's Wonderland.[26][27] It cost CA$400,000 to operate.[26] For the 2014 summer service, the non-stop buses to Canada's Wonderland were discontinued, requiring those passengers to transfer instead to York Region Transit local bus service at Maple station.[28]

In April 2015, the government of Ontario announced that as part of a broad GO Transit expansion project, service on the Barrie line would increase from 7 daily train trips to over 20 daily train trips by 2020.[29][lower-alpha 1] The service expansion will also add 12 weekend trains in each direction by 2017, and 10 off-peak weekday trips in each direction by 2018.[29] The railway electrification system is expected to be completed by 2024 from Union Station in Toronto to Aurora.[29] 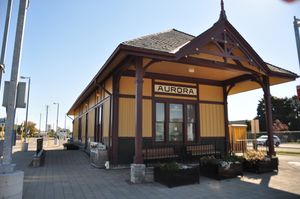 The Aurora station building is a federally designated heritage site

There are ten stations on the Barrie line, excluding the terminus at Union Station in Toronto.

During summer months, weekend and holiday service is provided in both directions throughout the day. As of 2014, the service consists of four trains in each direction between Barrie and Union Station.

The Barrie line makes connections with: 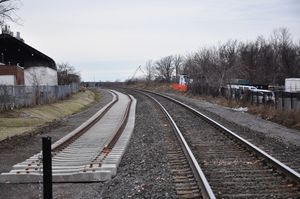 As part of the Yonge–University–Spadina line subway extension, a new GO station will be built to interchange with the Downsview Park subway station.[33] It will be located at the 17.1 kilometres (10.6 mi) track marker.[34] The York University station will be abandoned when the new station opens, which is expected to be in 2016.[35]

To provide an interchange with Viva, a bus rapid transit service in York Region, a new station will be built at York Regional Road 7. The station is to be called Concord Station, after the Concord neighborhood in which it will be located.[36] The city of Vaughan has integrated the station into its design plans for a mixed use development near the intersection of Highway 407 and the rail corridor. Both the municipal government of Vaughan and the regional government of York have identified this location as a potential site for the station, which requires GO Transit to perform an environmental assessment.[37] In January 2013, Vaughan municipal clerk sent a Vaughan City Council resolution to York Regional Council requesting Metrolinx consideration for four priority projects, among them all-day two-way service on the Barrie line, creation of the Concord GO Station, and creation of a Kirby Road GO Station.[38]

The design for Caledonia Station on the Eglinton Crosstown LRT includes provisions for a connection to the Barrie Line, including a pedestrian bridge above the Barrie line and provisions for elevator access to future GO platforms.[39] Metrolinx announced that an environmental assessment for the station would begin in the summer of 2015.[40]

A station in Innisfil is considered[by whom?] for a future expansion, to be located at approximately mile marker 52.00 miles (83.69 km), but there are no plans for this station yet.[41]

The Davenport Diamond is an at grade rail-to-rail crossing of the GO Barrie line and east-west CP Rail North Toronto subdivision tracks near Davenport Road in Toronto. In order to increase service frequency on the Barrie Line GO has identified the need to remove the diamond and build a grade separated crossing. In 2015 Metrolinx initiated a Transit Project Assessment Process (an environmental assessment process specific to transit projects) based on the preferred option of construction an overpass to carry the GO line over the east-west CP Rail line. This process anticipates a start of construction in 2017.[42][43]