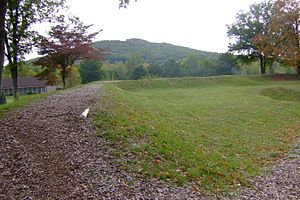 One side of Fort Davidson as seen today. The crater from the powder magazine blast is visible on the far right. Pilot Knob is the hill at the back.

The Battle of Fort Davidson, also known as the Battle of Pilot Knob, was the opening engagement of Price's Missouri Raid during the American Civil War. This engagement occurred on September 27, 1864, just outside Pilot Knob in Iron County, Missouri. Although outnumbered by more than ten-to-one, the Union defenders managed to repulse repeated Confederate assaults on their works, and were able to slip away during the night by exploiting a gap in the Southern siege lines. The attacking Rebels took possession of the fort the next day, but Price's profligate expenditure of men and ammunition ended his goal of seizing St. Louis for the Confederacy.[citation needed]

In April 1864, the Confederacy found itself in an increasingly desperate military situation. Unable to win any decisive victories or to obtain foreign recognition, its main strategy by this point was merely to hold on and hope that enormous Union casualties might result in a war-weary Northern public voting Abraham Lincoln out of office in November. The Democratic nominee, General George B. McClellan, had seen his party adopt a plank to make peace with the South if the party were successful—a plank McClellan was forced to repudiate after the Union met with military successes that summer. However, despite the many recent Union triumphs, just one significant military disaster in that shaky autumn of 1864 could still politically embarrass Lincoln and potentially doom his reelection.[citation needed]

As the election approached, things began to look even bleaker for the South. General Ulysses S. Grant had pinned down Robert E. Lee in Virginia, while Gen. William Sherman was locked in combat with Gen. Joseph Johnston north of Atlanta. Gen. George Crook's army held the Shenandoah Valley. The only realm that seemed to offer possibilities for a Confederate army embarrassing the Union was in the West. Accordingly, Major General Sterling Price was chosen for this task. He raised a mixed force of 12,000 cavalry and mounted infantry plus fourteen cannon, which he named the Army of Missouri, and set out to "liberate" his home state.[citation needed]

In September 1864, Price left Camden, Arkansas and marched north into Missouri. His initial objective was St. Louis, the state's largest city. Though Sherman had captured Atlanta, which provided a tremendous boost to Lincoln's reelection campaign, the seizure of St. Louis by Price–together with the huge quantities of arms in the St. Louis arsenal–could still prove catastrophic for the Republicans. As they moved north toward Ironton, near the terminus of the Iron Mountain Railroad from St. Louis, Price's army came upon Fort Davidson with a garrison of 1,500 men and seven guns, a tempting target. Price had a total of 12,000 mounted infantry under his command, 3,000 of whom were unarmed. Capturing the fort and its garrison would certainly prove beneficial to Southern morale.[citation needed]

As Price prepared to seize the garrison, he received word that Federal troops were moving south to intercept him. Ordering detachments to destroy the railroad to the north at once, he slowly moved his three main brigades into the Arcadia valley, where he invested the fort with his three divisions on the evening of September 26.[citation needed]

Union Brig. General Thomas Ewing, deputy commander of the District of St. Louis and a brother-in-law to William T. Sherman, had arrived at Fort Davidson with 200 Iowa infantry to augment the small Federal force already there. He was scouting the route Price might take towards St. Louis when he got word that the Ironton-St. Louis railroad behind him had been cut by Confederate cavalry. Despite being outnumbered ten-to-one, he decided to stand and fight. The fort occupied a strong defensive position, with hexagonal walls nine feet high and ten feet thick, surrounded by a dry moat nine feet deep. Two long rifle pits ran out from the walls, while a reinforced board fence topped the earthworks. Access could only be had through a drawbridge on the structure's southeastern corner. A 300-yard (270 m) cleared field of fire extended in every direction beyond the walls; any enemy approach would prove extremely hazardous.[citation needed]

The Battle of Fort Davidson began on September 26, when the leading elements of Price's army encountered Union pickets south of Ironton, 3 miles (4.8 km) south of Fort Davidson. The Federal troops were driven back into the town, and the two sides exchanged fire on the Iron County Courthouse lawn. That building still stands, and damage from stray bullets can still be seen in the structure's bricks. As more Rebels arrived, the diminutive Union forces withdrew to the fort.[citation needed]

On September 27, Ewing rejected several demands by Confederate leaders for the fort's surrender. Ewing later wrote that he considered capitulating, except that he had African American civilians in his camp and the slaughter of black soldiers earlier that year at Fort Pillow, Tennessee concerned him. Furthermore, Ewing was uncertain of his own fate if captured. He had issued General Order № 11 after William C. Quantrill's raid on Lawrence, Kansas in 1863, and had used Union cavalry to force thousands of Missouri civilians into Arkansas for alleged collaboration with Confederate bushwackers. Thus, Ewing decided to fight on, and Price determined to take his fort that same day.[citation needed]

Price's attack came as one massive assault from several directions: one brigade went over the top of Pilot Knob, engulfing a small Union force there, while another attacked over the summit of Shepherd Mountain. A third brigade skirted Shepherd Mountain to attack the northwestern sides of the fort, and the fourth attacked through a valley between the two mountains. As Union troops were driven back by superior numbers, the Rebels took control of Shepherd Mountain, southwest of the fort. A two-gun Confederate battery was subsequently deployed there, and its murderous fire caused the smaller of the two rifle pits within the fort to be abandoned.[citation needed]

These assaults were not made simultaneously, however, allowing the guns of Fort Davidson to be directed at each Confederate unit in turn. Just one brigade actually reached the fort itself, under a withering hail of cannon and musket fire, only to find the earthworks too steep to climb. During the assault, Union defenders were given hand grenades from the fort's magazines; these wood-finned impact devices were tossed over the walls, forcing the Rebels to break off their attack. The disorganized Southerners fell back and prepared to assault the fort again the following day.[citation needed]

As Price now set his troops to building scaling ladders for a new assault the next morning, Ewing held a Council of War inside the fort. Ewing had received belated orders from St. Louis to abandon the post; he now agreed that his position was untenable and planned to escape. Union soldiers put all equipment they could not take with them inside their powder magazine, draped the drawbridge in canvas to muffle the sounds of their movement, and began stealthily to exit the fort after midnight. Though the Confederates had lit a large charcoal pile to illuminate the valley, Union survivors withdrew undetected to the northwest directly between exhausted Confederates in two encampments. They left a slow-burning fuse to their powder magazine, which detonated with a huge blast well after the Union troops had gone. Despite the enormous explosion, Price did not have his men investigate the fort's condition until daybreak.[citation needed]

Price's subordinates were furious at this deception, and demanded that their commander pursue the escaping Union troops. But Price demurred. He had lost over ten percent of his army and three precious days in this fruitless exercise, and his dreams of taking St. Louis were now clearly dashed. Ewing's daring defense of the fort and escape through Price's lines made headlines throughout the western theater, and eventually Ewing received the personal thanks of a grateful President, Abraham Lincoln.[1]

Although the exact number of Confederate casualties are unknown, historians estimate that total Southern losses at the Battle of Fort Davidson were approximately 1,000. Earlier accounts included a higher number. This compares to 200 Union casualties, 28 of which were killed.[citation needed]

Price's troopers mounted up and resumed their advance northward, eventually turning west toward Jefferson City, the state capital. Finding that city too heavily fortified, they continued even further westward, fighting their way toward Kansas City and Fort Leavenworth. Ultimately, at Westport, Price would suffer a crushing defeat, and was forced to end his Missouri campaign. At the subsequent Battle of Mine Creek, the largest cavalry action of the Civil War and the only pitched battle between Union and Confederate armies fought in Kansas, Price's army was virtually destroyed as an effective unit. It limped back into Arkansas, having lost over 50% of the men who began the campaign in September.[citation needed] 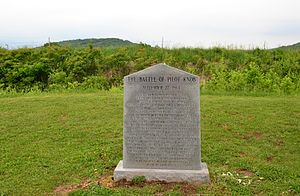 Granite monument behind which stand the earthworks of the fort
Main article: Fort Davidson

Today, the battle area and a museum is operated by the Missouri State Parks system as "Fort Davidson State Historic Site". The earthworks of the fort are still generally intact, surrounding the huge hole that was caused by the powder explosion. Following the battle, the Confederates retained the field and were therefore responsible for burying the dead. One of the rifle pits was accordingly selected for use as a mass grave. Although the exact number of Confederate casualties are unknown, park historians estimate that total Southern casualties were approximately 1,000. This compares to 200 Union casualties, 28 of whom were killed. The mass grave is now marked by a granite monument. The site is listed on the U.S. National Register of Historic Places.[citation needed]