Benedetto Croce (Italian: [beneˈdetto ˈkroːtʃe]; February 25, 1866 – November 20, 1952) was an Italian critic, idealist philosopher, historian, and politician. He wrote on numerous topics, including philosophy, history, historiography and aesthetics. He was a liberal, although he opposed laissez-faire free trade and had considerable influence on other Italian intellectuals, including both Marxist Antonio Gramsci and fascist Giovanni Gentile.

He was President of PEN International, the worldwide writers' association, from 1949 until 1952. He was nominated for the Nobel prize for literature sixteen times.[5]

Croce was born in Pescasseroli in the Abruzzo region of Italy. His family was influential and wealthy, and he was raised in a very strict Catholic environment. Around the age of 16, he quit Catholicism and developed a personal philosophy of spiritual life, in which religion cannot be anything but an historical institution where the creative strength of mankind can be expressed. He kept this philosophy for the rest of his life.

In 1883, an earthquake occurred in the village of Casamicciola on the island of Ischia near Naples, where he was on holiday with his family, destroying the home they lived in. His mother, father, and only sister were all killed, while he was buried for a long time and barely survived. After the earthquake he inherited his family's fortune and—much like Schopenhauer—was able to live the rest of his life in relative leisure, devoting a great deal of time to philosophy as an independent intellectual writing from his palazzo in Naples. (Ryn, 2000:xi[6]).

He studied law, but never graduated, at the University of Naples, while reading extensively on historical materialism. His ideas were publicized at the University of Rome towards the end of the 1890s by Professor Antonio Labriola. Croce was well acquainted with and sympathetic to the developments in European socialist philosophy exemplified by August Bebel, Friedrich Engels, Karl Kautsky, Paul Lafargue, Wilhelm Liebknecht, and Filippo Turati.

Influenced by Neapolitan-born Gianbattista Vico's thoughts about art and history,[7] he began studying philosophy in 1893. Croce also purchased the house in which Vico had lived. His friend, the philosopher Giovanni Gentile, encouraged him to read Hegel. Croce's famous commentary on Hegel, What is Living and What is Dead in the Philosophy of Hegel, was published in 1907.

As his fame increased, Croce was persuaded, against his initial wishes,[verification needed] to become involved with politics. He was appointed to the Italian Senate, a lifelong position, in 1910. (Ryn, 2000:xi[6]). He was an open critic of Italy's participation in World War I, feeling that it was a suicidal trade war. Though this made him initially unpopular, his reputation was restored after the war. He was Minister of Public Education between 1920 and 1921 for the 5th and last government headed by Giovanni Giolitti. Benito Mussolini assumed power slightly more than a year after Croce's exit from government; Mussolini's first Minister or Public Education was Giovanni Gentile, an independent who later became a fascist and with whom Croce had earlier cooperated in a philosophical polemic against positivism. Gentile remained minister for only a year, but managed to begin a comprehensive reform of Italian education that was based partly on Croce's earlier suggestions. Gentile's reform remained in force well beyond the Fascist regime, and was only partly abolished in 1962.

Croce was instrumental in the relocation of the Biblioteca Nazionale Vittorio Emanuele III to Naples' Palazzo Reale in 1923.

Croce initially supported Mussolini's Fascist government that took power in 1922.[8] However, the assassination by Fascists of the socialist politician, Giacomo Matteotti, in June 1924 shook Croce's support for Mussolini. In May 1925 Croce was one of the signatories to the Manifesto of the Anti-Fascist Intellectuals which had been written by Croce himself; however in June of the previous year he had voted in the Senate in support of the Mussolini government. He later explained that he had hoped that the support for Mussolini in parliament would weaken the more extreme Fascists who, he believed, were responsible for Matteotti's murder.

Croce was seriously threatened by Mussolini's regime, though the only act of physical violence he suffered at the hands of the fascists was the ransacking of his home and library in Naples in November 1926.[9] Although he managed to stay outside prison thanks to his reputation, he remained subject to surveillance, and his academic work was kept in obscurity by the government, to the extent that no mainstream newspaper or academic publication ever referred to him. Croce later coined the term onagrocrazia (literally "government by asses") to emphasize the anti-intellectual and boorish tendencies of parts of the Fascist regime.[10] However, in describing Fascism as anti-intellectual Croce ignored the many Italian intellectuals who at the time actively supported Mussolini's regime, including Croce's former friend and colleague, Gentile. Croce also described Fascism as malattia morale (literally "moral illness"). When Mussolini's government adopted antisemitic policies in 1938, Croce was the only non-Jewish intellectual who refused to complete a government questionnaire designed to collect information on the so-called "racial background" of Italian intellectuals.

In 1944, when democracy was restored in Southern Italy, Croce, as an "icon of liberal anti-fascism", became minister without portfolio in governments headed by Pietro Badoglio and by Ivanoe Bonomi (Ryn, 2000:xi–xii[6]).[11] He left the government in July 1944 but remained president of the Liberal Party until 1947 (Ryn, 2000:xii[6]).

Croce voted for the Monarchy in the Constitutional referendum of June 1946, after having persuaded his Liberal party to adopt a neutral stance. He was elected to the Constituent Assembly which existed in Italy between June 1946 and January 1948. He spoke in the Assembly against the Peace treaty (signed in February 1947), which he regarded as humiliating for Italy. He declined to stand as provisional President of Italy.

Croce's most interesting philosophical ideas are expounded in three works: Aesthetic (1902), Logic (1908), and Philosophy of the Practical (1908), but his complete work is spread over 80 books and 40 years worth of publications in his own bimonthly literary magazine, La Critica. (Ryn, 2000:xi[6]) Croce was philosophically a pantheist, but, from a religious point of view, an agnostic;[12] however, he did publish an essay entitled "Why We Cannot Help Calling Ourselves Christians". This essay shows the Christian roots of European culture, but religion is considered by Croce a mere propaedeutic study for philosophy, which is the only true science: philosophy is in fact the science of spirit (the "Philosophy of Spirit").

The Philosophy of Spirit

Heavily influenced by Hegel and other German Idealists such as Schelling, Croce produced what was called, by him, the Philosophy of Spirit. His preferred designations were "Absolute Idealism" or "Absolute Historicism". Croce's work can be seen as a second attempt (contra Kant) to resolve the problems and conflicts between empiricism and rationalism (or sensationalism and transcendentalism, respectively). He calls his way immanentism, and concentrates on the lived human experience, as it happens in specific places and times. Since the root of reality is this immanent existence in concrete experience, Croce places aesthetics at the foundation of his philosophy.

The Domains of Mind 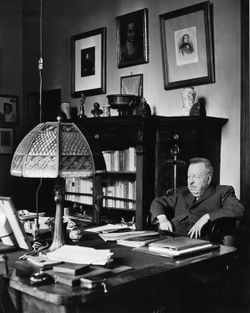 Croce's methodological approach to philosophy is expressed in his divisions of the spirit, or mind. He divides mental activity first into the theoretical, and then the practical. The theoretical division splits between aesthetic and logic. This theoretical aesthetic includes most importantly: intuitions and history. The logical includes concepts and relations. Practical spirit is concerned with economics and ethics. Economics is here to be understood as an exhaustive term for all utilitarian matters.

Each of these divisions have an underlying structure that colors, or dictates, the sort of thinking that goes on within them. While Aesthetic is driven by beauty, Logic is subject to truth, Economics is concerned with what is useful, and the moral, or Ethics, is bound to the good. This schema is descriptive in that it attempts to elucidate the logic of human thought; however, it is prescriptive as well, in that these ideas form the basis for epistemological claims and confidence.

Croce also had great esteem for Vico, and shared his opinion that history should be written by philosophers. Croce's On History sets forth the view of history as "philosophy in motion", that there is no "cosmic design" or ultimate plan in history, and that the "science of history" was a farce.

Croce's work Breviario di estetica (The Essence of Aesthetics) appears in the form of four lessons (quattro lezioni) that he was asked to write and deliver at the inauguration of Rice University in 1912. He declined an invitation to attend the event, but he wrote the lessons and submitted them for translation, so that they could be read in his absence.

In this brief, but dense, work, Croce sets forth his theory of art. He believed that art is more important than science or metaphysics, since only art edifies us. He claimed that all we know can be reduced to logical and imaginative knowledge. Art springs from the latter, making it at its heart, pure imagery. All thought is based in part on this, and it precedes all other thought. The task of an artist is then to invent the perfect image that they can produce for their viewer, since this is what beauty fundamentally is – the formation of inward, mental images in their ideal state. Our intuition is the basis of forming these concepts within us.

This theory was later debated by such contemporary Italian philosophers as Umberto Eco, who locates the aesthetic within a semiotic construction.[13]

Croce's liberalism differs from the theories advocated by most proponents of liberal political thought, including those in Britain and in the United States of America: while Croce theorises that the individual is the basis of society, he rejects social atomism, and while Croce accepts limited government, he refuses that the government should have fixed legitimate powers.

Croce did not agree with John Locke about the nature of liberty. Croce believed that liberty is not a natural right but an earned right that arises out of continuing historical struggle for its maintenance.

Croce defined civilization as the "continual vigilance" against barbarism, and liberty conformed to his ideal for civilization as it allows one to experience the full potential of life.

Croce also rejects egalitarianism as absurd. In short, his variety of liberalism is aristocratic, as he views society being led by the few who can create the goodness of truth, civilization, and beauty, with the great mass of citizens simply benefiting from them but unable to fully comprehend their creations (Ryn, 2000:xii[6]).

Writings of literary and political history