Benjamin Gratz Brown (May 28, 1826 – December 13, 1885) was an American politician. He was a Senator, the 20th Governor of Missouri, and the Liberal Republican and Democratic Party Vice presidential candidate in the presidential election of 1872.

Brown was born in 1826 in Frankfort, Kentucky, the son of Judith Ann (Bledsoe) and Mason Brown. He was the grandson of Senators John Brown and Jesse Bledsoe of Kentucky. He graduated from Transylvania University in Lexington in 1845 where he was a member of Beta Theta Pi Fraternity, and from Yale College in New Haven, Connecticut, in 1847. He studied law, and later settled in St. Louis, Missouri. There he joined his cousin, Francis P. Blair, Jr., and Senator Thomas Hart Benton in a struggle against the pro-slavery faction for control of Missouri's Democratic Party. He was a correspondent for the Missouri Republican at the Treaty of Fort Laramie (1851) and served as the secretary at the treaty negotiations.[1][2]

Brown became a member of the Missouri House of Representatives and served there between 1852 and 1858. An able lawyer in St. Louis, Brown made a speech in 1857 against a joint resolution opposing emancipation. The speech marked the beginning of the Free Soil movement in Missouri. He was a leader of the movement. After that, he edited the Missouri Democrat between 1854 and 1859. He was an unsuccessful candidate for Governor of Missouri in 1857.

On August 26, 1856 he fought a duel on Bloody Island (Mississippi River) with Thomas C. Reynolds (then the St. Louis District Attorney) over the slavery issue. Reynolds was not hurt but Brown was shot in the leg and limped for the rest of his life.[3]

Brown became a founding member of the Republican Party in Missouri. Throughout the 1860s, he and Blair contested control of the state's Republican party. He worked to prevent Missouri from seceding from the Union in 1861. After that, he served as an officer in the Union Army during the first half of the Civil War, raising a regiment (the 4th U.S. Reserves) and serving as its colonel. He recruited over 1,100 soldiers for his regiment, many of which were St. Louis-area German-Americans, a key constituency that Brown courted for his political advantage.

Brown resigned from the Army after he was elected in late 1863 as an Unconditional Unionist to the U.S. Senate to fill the vacancy caused by the expulsion of Waldo P. Johnson. Brown opposed Abraham Lincoln's moderation and objected to the Emancipation Proclamation because it did not free slaves in Missouri and other loyal border states. He was a key figure in the move to replace Lincoln with John C. Frémont in the presidential election of 1864. In the Senate, Brown was chairman of the Public Buildings and Grounds committee and of the Committee to Audit and Control the Contingent Expense. Following Lincoln's assassination, Brown was vehemently opposed to new President Andrew Johnson's moderate plan of Reconstruction. He also supported the Radical-sponsored Civil Rights Bill and Freedmen's Bureau Bill. Brown left the Senate in 1867 because of ill health.

In 1870, dissatisfied with the Missouri Republicans, he joined the new Liberal Republican Party. The party nominated Brown for governor, and he defeated Republican incumbent Joseph W. McClurg. Brown served as the Governor between 1871 and 1873. 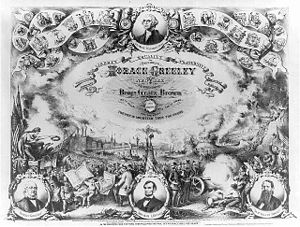 Brown returned to his law practice, quit the Republican Party and resumed his ties to the Democrats. He died in Kirkwood, Missouri and is interred there at Oak Hill Cemetery.