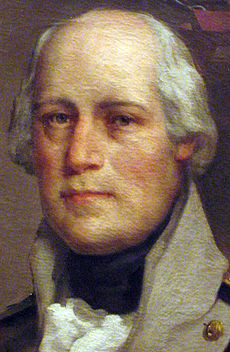 Benjamin Howard (1760 – September 18, 1814) was a Congressman from Kentucky, the first governor of Missouri Territory and a brigadier general in the War of 1812.

Howard was born in Lexington, Kentucky (then part of Virginia) and graduated in 1797 from William and Mary College. He was elected to the Kentucky General Assembly in 1800. He served in the 10th and 11th Congresses from Kentucky from 1807 until April 10, 1810, when on April 17, 1810, James Madison appointed him Governor of Louisiana Territory (the Louisiana Purchase district north of modern-day Louisiana) which was renamed Missouri Territory in June 1812.

He resigned his post during the War of 1812 to become brigadier general of the Eighth Military Department. During the conflict he and Nathan Boone (Daniel Boone's youngest son) attacked Sac and Fox positions in Illinois and established Fort Clark by Peoria, Illinois.

He fell ill on the way back and died in St. Louis, Missouri. He was buried in the Old Grace Church Graveyard in downtown St. Louis and then reinterred in Bellefontaine Cemetery.

Benjamin Howard is the namesake of Howard County, Missouri.[1]