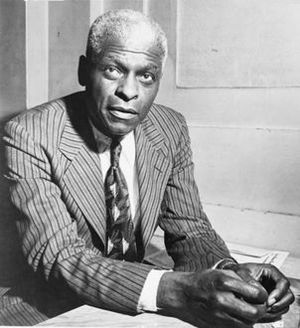 Benjamin Elijah Mays (August 1, 1894 – March 28, 1984) was an American black minister, educator, sociologist, social activist and the president of Morehouse College in Atlanta, Georgia from 1940 to 1967. Mays was also a significant mentor to civil rights leader Martin Luther King Jr. and was among the most articulate and outspoken critics of segregation before the rise of the modern civil rights movement in the United States.

Benjamin Elijah Mays was born in 1894 in Ninety Six, South Carolina, the youngest of eight children; his parents were tenant farmers and former slaves. As a child, seeing his father threatened by a white mob on horseback in the aftermath of the Phoenix Election Riot made a deep impression.[1]

After spending a year at Virginia Union University, he moved north to attend Bates College in Maine, where he obtained his B.A. in 1920, then entered the University of Chicago as a graduate student, earning an M.A. in 1925 and a Ph.D. in the School of Religion in 1935. His education at Chicago was interrupted several times: he was ordained a Baptist minister in 1922 and accepted a pastorate at the Shiloh Baptist Church of Atlanta, then later taught at Morehouse and at South Carolina State College.

While in graduate school, Mays worked as a Pullman Porter. He also worked as a student assistant to Dr. Lacey Kirk Williams, pastor of Olivet Baptist Church in Chicago and President of the National Baptist Convention, USA, Inc. 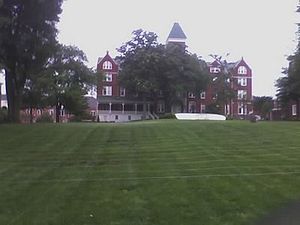 While working on his doctorate, Mays and Joseph Nicholson published a study entitled The Negro's Church, the first sociological study of the black church in the United States. Four years later in 1938, he published The Negro's God as Reflected in His Literature.

In 1926, he was appointed executive secretary of the Tampa, Florida Urban League. After two years at this post he became National Student Secretary of the YMCA.

Mays accepted the position of dean of the School of Religion at Howard University in Washington, D.C. in 1934. During his six years as dean, Mays traveled to India, where, at the urging of Howard Thurman, a fellow professor at Howard, he spoke at some length with Mahatma Gandhi.

In 1940, Mays became the president of Morehouse College. When Dr. Mays took over as president of Morehouse, the school was in terrible financial straits, and they had not had sound leadership since Dr. John Hope was president in the early 1900s. For those reasons, Dr. Mays accepted the job offer, and he took it as his duty to revive Morehouse.[2] In 1933, Morehouse was doing so poorly financially that it had allowed Atlanta University to take over its financial direction and budget. Within two years of his presidency, Dr. Mays was so successful that he was able to regain control of Morehouse's finances.[3] Dr. Mays had a few goals going into his presidency that he believed he must accomplish. At the top of his list was the need to hire more teachers, and to pay those teachers a better salary. To do that, Dr. Mays sought to be more strict in the collection of student fees, and he wanted to increase Morehouse's endowment from $1,114,000. Mays' fee collecting earned him the nickname "Buck Benny", and he more than quadrupled the endowment that he inherited by the end of his 27-year tenure.[4]

All of Dr. Mays' achievements and goals for Morehouse College went hand in hand with one another. To manufacture the graduates he so desired, he needed financial security and a good faculty. Thus, while maintaining financial security at Morehouse, Dr. Mays also desired and succeeded at continuing the esteemed tradition of producing Morehouse Men. A Morehouse Man was a highly educated and dedicated to service black professional. Specifically, Dr. Mays wanted his Morehouse Men to be physicians, lawyers, and ministers.[5] In his first speech to an incoming freshman class in 1940, Dr. Mays said, "If Morehouse is to continue to be great; it must continue to produce outstanding personalities."[6] However, it was not enough for Dr. Mays' students to be successful professionals. In addition to their success, he believed that they must be Christians who gave back to the black community.[7] His most famous student there was someone who benefitted deeply from Dr. Mays' educational and religious philosophies - Martin Luther King Jr. The two developed a close relationship that continued until King's death in 1968. Dr. King referred to Dr. Mays as his "Spiritual Mentor", and he saw in Dr. Mays "the ideal of what I [King] wanted a minister to be." Mays delivered the eulogy for King at his funeral.[8]

Mays emphasized two themes throughout his life: the dignity of all human beings and the gap between American democratic ideals and American social practices. Those became key elements of the message of King and the American civil rights movement. Mays explored these themes at length in his book Seeking to Be a Christian in Race Relations, published in 1957.

Mays gave the benediction at the close of the official program of the March on Washington for Jobs and Freedom in 1963.[9]

After his retirement in 1967 from Morehouse, Mays was elected president of the Atlanta Public Schools Board of Education, where he supervised the peaceful desegregation of Atlanta's public schools. He published two autobiographies, Born to Rebel (1971), and Lord, the People Have Driven Me On (1981).

Mays died in Atlanta on March 28, 1984. He was entombed on the campus of Morehouse College. His wife Sadie is entombed beside him.

Benjamin E. Mays High School in Atlanta, The Mays Hall of Howard University (where the School of Divinity is housed), and the Benjamin Mays Center at Bates College are named in Mays' honor, as well as Benjamin E. Mays International Magnet School in St. Paul, Minnesota.[11]

Mays was a member of the Omega Psi Phi Fraternity. In 2002, scholar Molefi Kete Asante listed Benjamin Mays on his list of 100 Greatest African Americans.[12]

The Mays family has initiated a petition to honor Dr. Mays’ legacy through a nomination for the high honor of the Presidential Medal of Freedom.