Bernard Mannes Baruch (/bəˈruːk/; August 19, 1870 – June 20, 1965) was an American financier, stock investor, philanthropist, statesman, and political consultant. After his success in business, he devoted his time toward advising U.S. Presidents Woodrow Wilson and Franklin D. Roosevelt on economic matters and became a philanthropist.

Bernard Baruch was born to a Jewish family[1][2] in Camden, South Carolina on August 19, 1870 to Belle (née Wolfe)[1] and Simon Baruch, a physician.[3] He was the second of four sons, including brothers Herman B. Baruch, Sailing W. Baruch, and Hartwig N. Baruch.[4][5]

In 1881 the family moved from Camden to New York City, where Bernard and his brothers attended local schools. He studied at and graduated from the City College of New York. Baruch married Annie Griffin, an Episcopalian, of New York.[1] They had three children:[2] Belle Baruch; Bernard Baruch Jr.; and Renee Baruch.[1]

Baruch became a broker and then a partner in A.A. Housman & Company. With his earnings and commissions, he bought a seat on the New York Stock Exchange for $18,000 ($434,000 in today's dollars). There he amassed a fortune before the age of 30 via speculation in the sugar market. By 1903 Baruch had his own brokerage firm and gained the reputation of "The Lone Wolf of Wall Street" because of his refusal to join any financial house. By 1910, he had become one of Wall Street's best-known financiers.

In 1925 he endowed the United Daughters of the Confederacy (UDC) Mrs. Simon Baruch University Award in memory of his mother, to support scholars who have written unpublished monographs for full-length books on Confederate history. His mother had been an early member of the organization and supported their activities.

In 1916, Baruch left Wall Street to advise President Woodrow Wilson on national defense and terms of peace. He served on the Advisory Commission to the Council of National Defense and, in 1918, became the chairman of the new War Industries Board. With his leadership, this body successfully managed the US's economic mobilization during World War I. In 1919, Wilson asked Baruch to serve as a staff member at the Paris Peace Conference. Baruch did not approve of the reparations France and Britain demanded of Germany, and supported Wilson's view that there needed to be new forms of cooperation, and supporting the creation of the League of Nations.[6]

For his services in support of the war effort, Baruch was awarded the Army Distinguished Service Medal with the following citation - The President of the United States of America, authorized by Act of Congress, July 9, 1918, takes pleasure in presenting the Army Distinguished Service Medal to Mr. Bernard M. Baruch, a United States Civilian, for exceptionally meritorious and distinguished services to the Government of the United States, in a duty of great responsibility during World War I, in the organization and administration of the War Industries Board and in the coordination of allied purchases in the United States. By establishing a broad and comprehensive policy for the supervision and control of the raw materials, manufacturing facilities, and distribution of the products of industry, he stimulated the production of war supplies, coordinated the needs of the military service and the civilian population, and contributed alike to the completeness and speed of the mobilization and equipment of the military forces and the continuity of their supply. War Department, General Orders No. 15 (1921)

In the 1920s and 30s, Baruch expressed his concern that the United States needed to be prepared for the possibility of another world war. He wanted a more powerful version of the War Industries Board, which he saw as the only way to ensure maximum coordination between civilian business and military needs.[7] Baruch remained a prominent government adviser during this time, and supported Franklin D. Roosevelt's domestic and foreign policy initiatives after his election.

During President Roosevelt's "New Deal" program, Baruch was a member of the "Brain Trust" and helped form the National Recovery Administration (NRA). He was also a major contributor to Eleanor Roosevelt's controversial initiative to build a resettlement community for unemployed mining families in Arthurdale, West Virginia.[8] 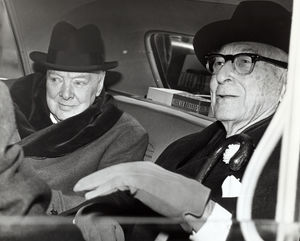 Sir Winston Churchill, British statesman, and Bernard Baruch, financier, converse in the back seat of a car in front of Baruch's home.

When the United States entered World War II, President Roosevelt appointed Baruch a special adviser to the director of the Office of War Mobilization. He supported what was known as a "work or fight" bill. Baruch advocated the creation of a permanent superagency similar to his old Industries Board. His theory enhanced the role of civilian businessmen and industrialists in determining what was needed and who would produce it.[9] Baruch's ideas were largely adopted, with James Byrnes appointed to carry them out. During World War II Baruch remained a trusted adviser and confidant of President Roosevelt, who in 1944 spent a month as a guest at Baruch's South Carolina estate, Hobcaw Barony.

In February 1943, Roosevelt invited Baruch to replace the widely criticized War Production Board head Donald M. Nelson. Baruch had long coveted the job, and responded that he only needed to ask his doctor if he was healthy enough for the post. During the delay, however, presidential advisor Harry Hopkins persuaded Roosevelt that firing Nelson at the army's demands would make him look weak, and when Roosevelt and Baruch met at the White House, Roosevelt declined to discuss the job offer further.[10][11]

In 1946 President Harry S. Truman appointed Baruch as the United States representative to the United Nations Atomic Energy Commission (UNAEC). On Friday, June 14, 1946, Baruch presented his Baruch Plan, a modified version of the Acheson–Lilienthal plan, to the UNAEC, which proposed international control of then-new atomic energy. The Soviet Union rejected Baruch's proposal as unfair given the fact that the U.S. already had nuclear weapons; it proposed that the U.S. eliminate its nuclear weapons before a system of controls and inspections was implemented. A stalemate ensued.

Baruch resigned from the commission in 1947. His influence began to diminish, as he grew further out of step with the views of the Truman administration.[12]

Baruch was well-known, and often walked or sat in Washington, D.C's Lafayette Park and in New York City's Central Park. It was not uncommon for him to discuss government affairs with other people while sitting on a park bench. This became his most famous characteristic.

In 1960, on his ninetieth birthday, a commemorative park bench in Lafayette Park across from the White House was dedicated to him[13][14] by the Boy Scouts.[15]

He continued to advise on international affairs until his death on June 20, 1965, in New York City, at the age of 94.[16] His funeral at Temple Shaaray Tefila, the family synagogue, was attended by 700 people.[17] His grave is at Flushing Cemetery, Flushing, Queens, New York City.

Bernard Baruch owned a string of Thoroughbred racehorses and raced under the name "Kershaw Stable". In 1927 his horse, Happy Argo, won the Carter Handicap. 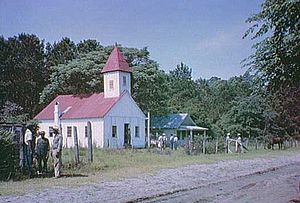 Between 1905 and 1907, Bernard Baruch systematically purchased a total of approximately 15,560 acres (63 square kilometers) of the former 18th century Hobcaw Barony, also known as Bellefield Plantation, located on a peninsula called Waccamaw Neck between the Winyah Bay and the Atlantic Ocean, in Georgetown County, South Carolina. Baruch subsequently developed sections of the property as a winter hunting resort. He later transferred the property to his eldest child, Belle W. Baruch. Upon her death in 1964, the property was transferred to The Belle W. Baruch Foundation as the Hobcaw Barony nature and research preserve. The property also includes more than forty historic buildings representing the 18th and 19th century rice cultivation industry, and early-mid 20th century winter resorts. The entire property was named to the National Register of Historic Places on November 2, 1994.[18]