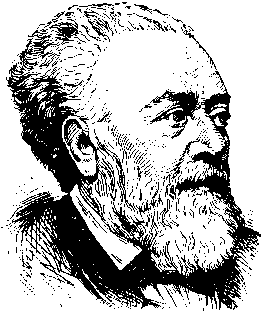 Berthold Auerbach (28 February 1812 – 8 February 1882) was a German-Jewish poet and author. He was the founder of the German "tendency novel", in which fiction is used as a means of influencing public opinion on social, political, moral, and religious questions.

Moses (Moyses) Baruch Auerbach was born in Nordstetten (now Horb am Neckar) in the Kingdom of Württemberg. He attended Eberhard-Ludwigs-Gymnasium.[1] He was intended for the ministry, but after studying philosophy at Tübingen, Munich and Heidelberg, and becoming estranged from Jewish orthodoxy by the study of Spinoza, he devoted himself to literature. While a student in Heidelberg and under the pseudonym “Theobald Chauber,” he produced a Biography of Frederick the Great (1834–36).

Another early publication was entitled Das Judentum und die neueste Litteratur (Judaism and Recent Literature; 1836), and was to be followed by a series of novels taken from Jewish history. Of this intended series he actually published, with considerable success, Spinoza (1837) and Dichter und Kaufmann (Poet and Merchant; 1839). His romance on the life of Spinoza adheres so closely to fact that it may be read with equal advantage as a novel or as a biography. In 1841, he did a translation of Spinoza's works. In 1842, he wrote Der gebildete Bürger (The educated citizen), an attempt to popularize philosophical subjects.

But real fame and popularity came to him after 1843, when he began to occupy himself with the life of the common people which forms the subject of his best-known works. That year he published Schwarzwälder Dorfgeschichten (Black Forest Village Stories; 1843) which was his first great success, widely translated, and expressing with a sympathetic realism the memories and scenes of youth. In his later books, of which Auf der Höhe (On the Heights;[2] 1865) is perhaps the most characteristic, and certainly the most famous, he revealed an unrivaled insight into the soul of the Southern German country folk, and especially of the peasants of the Black Forest and the Bavarian Alps. His descriptions are remarkable for their fresh realism, graceful style and humour. In addition to these qualities, his last books are marked by great subtlety of psychological analysis. Auf der Höhe was first published at Stuttgart in 1861, and has been translated into several languages.

Auerbach died at Cannes shortly before his 70th birthday. His life was uneventful, though embittered at the close by the growth of German anti-Semitism.