Beta Theta Pi (ΒΘΠ also "Beta") is a North American social fraternity that was founded in 1839 at Miami University in Oxford, Ohio. The fraternity currently consists of 113 active chapters and 21 colonies in the United States and Canada. More than 300,000 members have been initiated worldwide and there are currently around 9,000 undergraduate members.[2] Beta Theta Pi is the oldest of the three fraternities that formed the Miami Triad along with Phi Delta Theta and Sigma Chi. 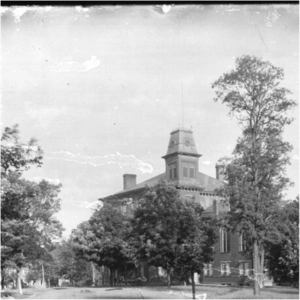 Students at Miami University at the time of Beta's founding had previously formed two rival literary societies: The Erodelphian and Union Literary Society. A student of the school, John Reily Knox began to gather members of both the Erodelphian and Union Literary Societies with the goal of creating a new fraternity. In a letter that he wrote four years after the founding of the Alpha chapter, Knox said that other fraternities being formed possessed "many objectionable features which rendered them liable to be used as engines of evil as well as instruments of good." Beta Theta Pi was founded at 9:00 pm on Thursday, August 8, 1839 by eight students at Miami University. The group held its first regular meeting in the Hall of the Union Literary Society, an upper room of the campus building known as Old Main.[3]

The eight founders, in the order their names appear in the minutes, were:

The five core values espoused by Beta Theta Pi are cultivation of intellect, responsible conduct, mutual assistance, integrity, and trust.[4] These are the underpinnings for their mission statement to "develop men of principle for a principled life." In 1879 Beta Theta Pi became the first college fraternity to publish its constitution. The fraternity continues to guard certain secrets about membership. Similar to other fraternities, Beta Theta Pi's code emphasizes international fellowship, cultural development, and cooperation .

In August 1996, St. Lawrence University Chairman and Beta Theta Pi alumnus E.B. Wilson wrote a letter to the editor challenging the national fraternity to undertake a project to reverse the emerging Greek and Beta culture which he felt was not in line with their core values.[5]

Since the start of Men of Principle, Beta Theta Pi has seen improvement in the areas of academics and recruitment. Before Men of Principle, the Fraternity's average chapter GPA was just above a 2.8. In 2008 the Fraternity's GPA had risen to a 3.17. The average chapter size in 2008 was 67.1 men, compared to 48.9 in 1997. In 1998 there was an average of 1.95 advisers per chapter, while as of 2008 there was an average of 7.0 advisers working with each one of the chapters.[5]

Since the implementation of the program, Beta has received backlash from their own chapters and from media outlets. Between the beginning of the program in 1998 and 2013, Beta Theta Pi's national headquarters closed 85 chapters for failing to comply to the Men of Principle initiative.[4]

As part of a multi-year dispute over co-ed student housing issues, the Beta Theta Pi chapter at Wesleyan University had been refusing access to campus security personnel. In March 2010 Wesleyan issued a warning to students to avoid the chapter house. In October of that year a freshman was raped by a non-member non-student at a Beta Theta Pi Halloween party. The rapist was arrested, and both the fraternity and the university reached an out-of-court settlement with the victim in 2014. The dispute over campus housing was later resolved.[7][8][9]

In March 2013 the Carnegie Mellon University chapter was suspended following a police investigation of sexually explicit videos and photographs circulating among members.[4][10]

In February 2014 the fraternity's Alpha chapter at Miami University was closed in response to alcohol and hazing incidents.[11]

In October 2014, the University of Washington chapter was suspended by the university following hazing allegations.[12] The chapter was disbanded by the fraternity a month later, following an investigation.[13]

Regarding closures, Tristan Sopp, a Beta Theta Pi staff member, said "the closures, for us, are seen as a sign of strength, because we hold our chapters accountable."[4]

In 2014, the University of Utah chapter received a $3,300 grant from a charity started by Robin McGraw for its work to stop sexual assault.[14]