Bijeljina (Cyrillic: Бијељина; pronounced [bijêːʎina][2]) is a city and municipality in northeastern Republika Srpska, which is one of two entities of Bosnia and Herzegovina. The city is the second largest in the Republika Srpska entity after Banja Luka and the sixth largest city in Bosnia and Herzegovina (after Sarajevo, Banja Luka, Tuzla, Zenica and Mostar), and is situated on the plains of Semberija. Bijeljina is the unofficial centre of the eastern part of Republika Srpska, with 114,663[3] inhabitants. Bijeljina is located at 6 km (4 mi) from the border with Serbia and 40 km (25 mi) from the border with Croatia.

The official languages of Bosnia and Herzegovina are Bosnian, Croatian and Serbian. The Bosnian and Serbian languages use both the Cyrillic and Latin alphabet, while Croatian only uses Latin.The town's name in Cyrillic is "Бијељина".

The earliest confirmed traces of human life in the area of today's Bijeljina date from the New Stone Age (5000-3000 BC). Most of the traces from prehistoric periods were found in the villages Ostojićevo, Batković, Glavičice, Dvorovi, Kojčinovac, Patkovača and Triješnica. Characteristics of pottery, tools and weapons emphatically confirm cultural connections of indigenous inhabitants of Semberija with the eneolithic and Bronze Age cultures - Vučedol, Kostolac and Baden culture.

The oldest archeological site of this period is located on both sides of channel Bistrik, between the villages Batković and Ostojićevo and it consists of four smaller sites which date from the period of the 7th to the 12th century. At Jazbina and Oraščić remains were found of a settlement with half-buried huts, but the most significant discovery was a complex of metallurgical workshop at the site Čelopek where iron was melted in the 8th century and where iron tools were manufactured. At this time the village Bistrik was called Bistrica and it was the center of the parish, which covered the entire territory of present-day city of Bijeljina. Although the name Bijeljina was first mentioned in 1446, this name was in use only after 1918. During Austro-Hungarian period, the town had the name Bjelina and, before that, Belina or Bílina. 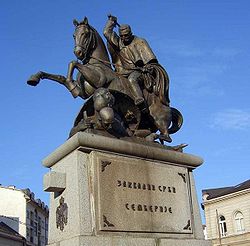 Petar Karađorđević I monument. He was the King of Serbia from 1903–18.

In 1838, the first confessional elementary school was opened. A modern school building was built in 1902. In this school worked Jovan Dučić between 1893–95.[4] Dučić was a famous Hercegovinian Serb poet, writer and diplomat. Today a street in central Bijeljina is named after him.

In front of City Hall is a statue of King Peter I of Serbia, who ruled the Kingdom of Serbia between 1903 and 1918. During the Second World War, the Ustaša removed it. After World War II, the communist government refused to return the monument.[why?] The first non-communist local government returned the monument in the early 1990s.[citation needed]

In September 1991, Bosnian Serbs proclaimed a Serbian Autonomous Oblast with Bijeljina as its capital. In March 1992, the Bosnian referendum on independence was passed with overwhelming support from Bosniaks and Bosnian Croats. A poorly organized, local Bosniak Patriotic League had been established in response to the Bosnian Serb proclamation and on 31 March it was provoked into an armed conflict by local Serbs and the SDG. On 1–2 April, the SDG and the JNA overtook Bijeljina with little resistance; murders, rapes, house searches, and pillaging followed. These actions have been described as genocidal by the historian Professor Eric D. Weitz of the City College of New York. A massacre was carried out and involved the killing of between 48 and 78 civilians by Serb paramilitary groups. The majority of those killed were Bosniaks (or Bosnian Muslims). The dead included members of other ethnicities, such as Serbs deemed unloyal by the local authorities. The killing was committed by a local paramilitary group known as Mirko's Chetniks and by the Serb Volunteer Guard (SDG, also known as Arkan's Tigers), a Serbia-based paramilitary group under the command of the Yugoslav People's Army (JNA) that was controlled by Serbian President Slobodan Milošević.

The village of Batković in the municipality of Bijeljina was the site of the Batković concentration camp, believed to be the first concentration camp in operation during the Bosnian War. It was run by Serbs from 1 April 1992 until late January 1996.[5] The prisoners were predominantly ethnic Bosniaks, who were tortured, sexually assaulted, and killed by Serbs.[6][7] A "State Commission for the Free transfer of the Civilian Population" or "Commission for the Exchange of Population" was created and headed by Vojkan Đurković, a Major in the SDG, and included Mauzer's Panthers. Its purpose was to completely expel all non-Serbs from Bijeljina.

New birth of Bijeljina is experienced in the late 1990s and the first decade of the 21st century. After a population boom due to war events and population saturation and insufficient capacity of the city that was built in less need, today you can see re-building of Bijeljina in the big city, with new settlements, roads, schools, universities, and cultural institutions. 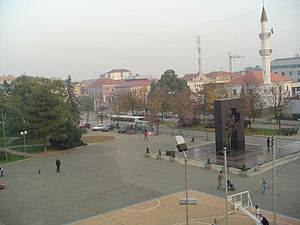 The Atik mosque: Built between 1520 and 1566 during the period of Sultan Suleiman the Magnificent, the mosque was completely destroyed on 13 March 1993 and rebuilt where it stood before.

Basil of Ostrog Monastery in the center of Bijeljina is a newly built monastery (2001.) Dedicated to St Basil of Ostrog. The bell tower with a clock of over 30 meters dominates the surroundings and a symbol of the monastery. As part of the monastery is a museum, dining room, library, hermitages for monks. Inside the temple is painted magnificent frescoes. It is particularly valuable copy Trojeručica miraculous icons, the gift from Hilandar monastery. In Bijeljina is also located the Holy Temple, the Church of St. Petka, and the old Catholic church.

The Filip Višnjić Library is the oldest cultural institution in Bijeljina - founded in 1932 year, thanks to prominent people and intellectuals. Played a major role in raising the cultural level of the construction and opening of reading rooms in rural villages of Semberija. Now located in a modern building and has over 100,000 books.

The Tavna Monastery is located in the southern part of the Bijeljina municipality. The date of foundation is hidden somewhere in the shadows of the far past. The cronichles of monasteries Tronosha and Pech say it was built by Dragutin's sons Vladislav i Urosic. Stefan Dragutin was the King of Serbia from 1276 to 1282 and king of Srem from 1282 to 1316. The present church of monastery Tavna, is built in the same place as the original one. The Tavna Monastery is older than the other monasteries in the region such as Ozrena, Liplja, Vozuce and Gostovica. Tavna was damaged in the first years of Turkish rule, but was restored by the people. This was not the only time the monastery was damaged. It was damaged many times during the Turkish period and also during World War Two. Between 1941 and 1945, Tavna was bombed by the Ustase. One of the gravestones says "Zdravko Jovanovic Killed 1943 by the Ustasa Blue Division protecting and defending the monastery"; after WWII Tavna was rebuilt.[8]

The first primary school in Bijeljina was opened in 1838. After the Second World War, changes were made to the school system, and in 1951 the first elementary school was opened. In 1956, a second elementary school was opened. The third and fourth elementary schools opened in 1959, and subsequently 1966. Since 1953, a basic music school has been operating in the city. Primary schools in Bijeljina include the following: OS Sveti Sava, OS Knez Ivo od Semberije, OS Vuk Karadžić, OS Jovan Dučić. There are several high schools operating in the city, such as Filip Višnjić Gymnasium, Stevan Stojanovic Mokranjac Music School, an agricultural high school, an economic and a technical school. The University of Bijeljina has several faculties: Law, Economics, Business Economics and Education. The main private universities in the city are Slobomir P University and University Sinergija. 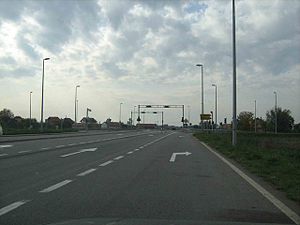 The basic street network is dependent on the main routes: the M-14.1 Brcko-Zvornik and the M-18 Raca-Ugljevik. The complete road network in contact with the city and the urban traffic network is extremely radial orientation. She had eleven major transportation routes, which link directly to the city. Around the city is located bypass, but isn't fully completed. The main bus station in Bijeljina is located in the central zone of the city. The main bus station in Bijeljina is owned by Semberija Transport. From Bijeljina passengers can travel to other cities in the region as well as some cities in Europe such as Ljubljana, Vienna, Berlin, Munich, Zürich, Stockholm. There is only one railway line in Bijeljina. That railway line stretches from Bijeljina to Šid in Serbia. From Šid it joins another line going east towards Belgrade or going west to Croatia.

Semberija is a flat region which is bound by the rivers Sava, Drina and the Majevica mountains.The entire Semberija area is typically an agricultural region which has fertile land and suitable weather conditions.

Semberija has the most developed agricultural area in Republika Srpska. The focus of the production is on wheat and corns, vegetables, cabbage, paprika, tomato and water-melon. Also, cattle-breeding (fattening of cows and pigs) and growing fruits.

The Dvorovi Spa is one of the most famous spas in the Republika Srpska. The Dvorovi Spa was formed after the discovery of thermal water drilling for oil exploration 1957th in Semberija. The depth of the source is at 1435 meters, the water is oligomineral, and the thermal temperature is 75°S.[citation needed] 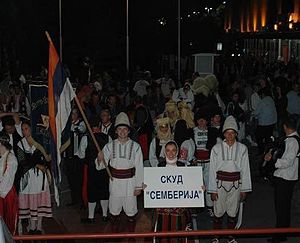 SKUD Semberija at the Semberija folk fest in Bijeljina 2006

Bijeljina has one major stadium known as Bijeljina Gradski Stadion. The Stadium is home to FK Radnik Bijeljina, which competes in the Premier League of Bosnia and Herzegovina.

See also: List of twin towns and sister cities in Bosnia and Herzegovina

Bijeljina is twinned with: