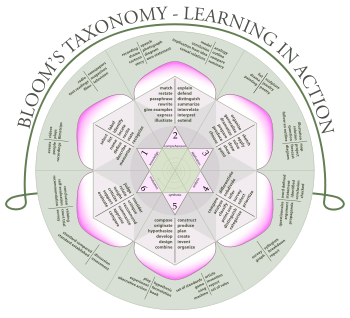 Bloom's taxonomy (Cognitive) according to the Bloom's verbs and matching assessment types. The verbs are intended to be feasible and measurable.

Bloom's taxonomy is a set of three hierarchical models used to classify educational learning objectives into levels of complexity and mastery. The three lists cover the learning objectives in cognitive, affective and sensory domains. The cognitive domain list has been the primary focus of most traditional education and is frequently used to structure curriculum learning objectives, assessments and activities. As with most theoretical models, they are controversial even while commonly used. [1]

They were named after Benjamin Bloom, who chaired the committee of educators that devised the taxonomy. He also edited the first volume of the standard text, Taxonomy of Educational Objectives: The Classification of Educational Goals.[2]

Although named after Bloom, the publication of Taxonomy of Educational Objectives followed a series of conferences from 1949 to 1953, which were designed to improve communication between educators on the design of curricula and examinations.[4]

Questions like: What are the health benefits of eating apples?

Questions like: Compare the health benefits of eating apples vs. oranges.

Questions like: Would apples prevent scurvy, a disease caused by a deficiency in vitamin C?

Examine and break information into parts by identifying motives or causes. Make inferences and find evidence to support generalizations

Questions like: List four ways of serving foods made with apples and explain which ones have the highest health benefits. Provide references to support your statements.

Present and defend opinions by making judgments about information, validity of ideas or quality of work based on a set of criteria

Questions like: Which kinds of apples are best for baking a pie, and why?

Builds a structure or pattern from diverse elements; it also refers the act of putting parts together to form a whole (Omari, 2006). Compile information together in a different way by combining elements in a new pattern or proposing alternative solutions

Skills in the affective domain describe the way people react emotionally and their ability to feel other living things' pain or joy. Affective objectives typically target the awareness and growth in attitudes, emotion, and feelings.

There are five levels in the affective domain moving through the lowest order processes to the highest:

The lowest level; the student passively pays attention. Without this level no learning can occur. Receiving is about the student's memory and recognition as well.

The student actively participates in the learning process, not only attends to a stimulus; the student also reacts in some way.

The student attaches a value to an object, phenomenon, or piece of information. The student associates a value or some values to the knowledge they acquired.

The student can put together different values, information, and ideas and accommodate them within his/her own schema; comparing, relating and elaborating on what has been learned.

The student at this level tries to build abstract knowledge.

Skills in the psychomotor domain describe the ability to physically manipulate a tool or instrument like a hand or a hammer. Psychomotor objectives usually focus on change and/or development in behavior and/or skills.

Bloom and his colleagues never created subcategories for skills in the psychomotor domain, but since then other educators have created their own psychomotor taxonomies.[5] Simpson (1972) proposed the following levels:

The ability to use sensory cues to guide motor activity. This ranges from sensory stimulation, through cue selection, to translation. Examples: Detects non-verbal communication cues. Estimate where a ball will land after it is thrown and then moving to the correct location to catch the ball. Adjusts heat of stove to correct temperature by smell and taste of food. Adjusts the height of the forks on a forklift by comparing where the forks are in relation to the pallet. Key Words: chooses, describes, detects, differentiates, distinguishes, identifies, isolates, relates, selects.

Readiness to act. It includes mental, physical, and emotional sets. These three sets are dispositions that predetermine a person's response to different situations (sometimes called mindsets). Examples: Knows and acts upon a sequence of steps in a manufacturing process. Recognize one's abilities and limitations. Shows desire to learn a new process (motivation). NOTE: This subdivision of Psychomotor is closely related with the “Responding to phenomena” subdivision of the Affective domain. Key Words: begins, displays, explains, moves, proceeds, reacts, shows, states, volunteers.

The early stages in learning a complex skill that includes imitation and trial and error. Adequacy of performance is achieved by practicing. Examples: Performs a mathematical equation as demonstrated. Follows instructions to build a model. Responds to hand-signals of instructor while learning to operate a forklift. Key Words: copies, traces, follows, react, reproduce, responds.

This is the intermediate stage in learning a complex skill. Learned responses have become habitual and the movements can be performed with some confidence and proficiency. Examples: Use a personal computer. Repair a leaking tap. Drive a car. Key Words: assembles, calibrates, constructs, dismantles, displays, fastens, fixes, grinds, heats, manipulates, measures, mends, mixes, organizes, sketches.

The skillful performance of motor acts that involve complex movement patterns. Proficiency is indicated by a quick, accurate, and highly coordinated performance, requiring a minimum of energy. This category includes performing without hesitation, and automatic performance. For example, players will often utter sounds of satisfaction or expletives as soon as they hit a tennis ball or throw a football, because they can tell by the feel of the act what the result will produce. Examples: Maneuvers a car into a tight parallel parking spot. Operates a computer quickly and accurately. Displays competence while playing the piano. Key Words: assembles, builds, calibrates, constructs, dismantles, displays, fastens, fixes, grinds, heats, manipulates, measures, mends, mixes, organizes, sketches. NOTE: The Key Words are the same as Mechanism, but will have adverbs or adjectives that indicate that the performance is quicker, better, more accurate, etc.

Skills are well developed and the individual can modify movement patterns to fit special requirements. Examples: Responds effectively to unexpected experiences. Modifies instruction to meet the needs of the learners. Perform a task with a machine that it was not originally intended for that purpose (machine is not damaged and there is no danger in performing the new task). Key Words: adapts, alters, changes, rearranges, reorganizes, revises, varies.

In the appendix to Handbook I, there is a definition of knowledge which serves as the apex for an alternative, summary classification of the educational goals. This is significant as the taxonomy has been called upon significantly in other fields such as knowledge management, potentially out of context.

The taxonomy is set out:

Criticism of the taxonomy

As Morshead (1965) pointed out on the publication of the second volume, the classification was not a properly constructed taxonomy, as it lacked a systemic rationale of construction.

This was subsequently acknowledged in the discussion of the original taxonomy in its 2000 revision,[7] and the taxonomy reestablished on more systematic lines. It is generally considered[citation needed] that the role the taxonomy played in systematising a field was more important than any perceived lack of rigour in its construction.

Some critiques of the taxonomy's cognitive domain admit the existence of these six categories, but question the existence of a sequential, hierarchical link.[9] Often, educators view the taxonomy as a hierarchy and dismiss the lowest levels as unworthy of teaching[citation needed]. The learning of the lower levels enables the building of skills in the higher levels of the taxonomy.[citation needed] This scaffolding process is an application of Vygotskian constructivism.[10] Also the revised edition of Bloom's taxonomy has moved Synthesis higher in the order than Evaluation. Some consider the three lowest levels as hierarchically ordered, but the three higher levels as parallel.[7] Others say that it is sometimes better to move to Application before introducing concepts[citation needed], the idea being to create a learning environment where the real world context comes first and the theory second to promote the student's grasp of the phenomenon, concept or event. This thinking would seem to relate to the method of problem-based learning.

Furthermore, the distinction between the categories can be seen as artificial since any given cognitive task may entail a number of processes. It could even be argued that any attempt to nicely categorize cognitive processes into clean, cut-and-dried classifications undermines the holistic, highly connective and interrelated nature of cognition.[11] This is a criticism that can be directed at taxonomies of mental processes in general.

Bloom’s taxonomy serves as the backbone of many teaching philosophies, in particular those that lean more towards skills rather than content.[7][6] These educators would view content as a vessel for teaching skills. The emphasis on higher-order thinking inherent in such philosophies is based on the top levels of the taxonomy including analysis, evaluation, synthesis and creation. Bloom’s taxonomy can be used as a teaching tool to help balance assessment and evaluative questions in class, assignments and texts to ensure all orders of thinking are exercised in student’s learning.

The skill development that takes place at these higher orders of thinking interacts well with a developing global focus on multiple literacies and modalities in learning and the emerging field of integrated disciplines.[12] The ability to interface with and create media would draw upon skills from multiple levels of the taxonomy including analysis, application and creation.[13][14] Bloom's taxonomy (and the revised taxonomy) continues to be a source of inspiration for educational philosophy and for developing new teaching strategies.