Robert Francis "Bobcat" Goldthwait (born May 26, 1962) is an American actor, comedian, filmmaker, and voice artist, known for his acerbic black comedy, delivered through an energetic stage personality with an unusual gruff and high-pitched voice. He came to prominence with his stand-up specials An Evening with Bobcat Goldthwait – Share the Warmth and Bob Goldthwait – Is He Like That All the Time? and his acting roles, including Zed in the Police Academy franchise.

Goldthwait was born Robert Francis Goldthwait on May 26, 1962 in Syracuse, New York, the son of Kathleen Ann (Welch), a department store employee, and Thomas Lincoln Goldthwait, a sheet metal worker.[1][2] He was raised in a Catholic working-class family.[3]

At an early age, Goldthwait decided on a career as a comedian and was performing professionally while still in high school at age 15. He attended St. Matthew's grammar school in East Syracuse, New York, where he met Tom Kenny in 1st grade. In 1980, they graduated together from Bishop Grimes Junior/Senior High School in East Syracuse, New York. They formed a comedy troupe with Tom Nettle called the Generic Comics. Although nicknamed "Bobcat" and "Tomcat," they did not appear as a comedy team together. Early in his career, Goldthwait also co-wrote with Martin Olson, who is listed as writer on his first two comedy specials Share the Warmth and Don't Watch This Show.

Goldthwait became recognized as a solo stand-up comedian and had two televised concert specials in the 1980s: An Evening with Bobcat Goldthwait – Share the Warmth and Bob Goldthwait – Is He Like That All the Time? He became known for his unique brand of comedy, which combines elements of political satire and often bizarre or somewhat unsettling black comedy.

In 2004, Goldthwait's stand-up was featured in Comedy Central's animated series Shorties Watchin' Shorties. Goldthwait announced his retirement from stand-up in 2005 and performed a "final" run in Vegas in September 2005;[citation needed] he briefly resumed touring in early 2008 (from January through April); he performed again in 2009, doing stand-up in Winnipeg on April 3 and 4, and again in Omaha on August 28 and 29; he returned to Winnipeg for 4 shows on April 9 and 10, 2010. Continuing his retirement from stand-up he took the stage in Atlanta from January 27–30, 2011.

Goldthwait and Robin Williams appeared on the same bill together, but not as a comedy team, using the names "Jack Cheese" and "Marty Fromage." Goldthwait used the name Jack Cheese when he appeared in Tapeheads; when Williams made a cameo as Mime Jerry in Goldthwait's Shakes the Clown, he was billed as Marty Fromage.

Goldthwait has appeared in several films. His first major role was Zed in the Police Academy franchise. He starred in One Crazy Summer, Burglar, Scrooged and Hot to Trot. In 1992, Goldthwait directed, wrote, and starred in Shakes the Clown. He also made a cameo appearance as an insane writer in Radioland Murders.[4]

In 1985, Goldthwait appeared in Twisted Sister's official video to "Leader of the Pack" and "Be Chrool to Your Scuel" from Come Out and Play.[5]

During the fall of 1993, Goldthwait performed stand-up material as an opening act for Nirvana on what would be their final North American tour, angering audiences in Chicago after making a joke about Michael Jordan's recently murdered father. He also appeared in a promo video for the band's album In Utero and once fooled an interviewer during a phone interview, impersonating Dave Grohl.

As a guest on one of the last episodes of The Arsenio Hall Show, Goldthwait became demonstrably upset that the program was being cancelled. At the time it was widely believed that Paramount Studios had refused to renew Hall's contract because Late Night with David Letterman was now moving to CBS, and Goldthwait took his anger out on Paramount. He stood on the set's couch, spray-painted "Paramount Sucks" on a glass wall, knocked over some video equipment, then threw cushions from the couch into the audience (they cheered).

He began directing Jimmy Kimmel Live! in 2004.[4][5] While there, ratings for the show increased to over 2 million viewers per night, and jumped 50% with teens; however, in May 2006 Goldthwait left to pursue his film career. Goldthwait maintains contact with Kimmel and still directs for television and film. He returned to directing segments for Jimmy Kimmel Live! in the summer of 2007.

In 1992, Goldthwait appeared as a guest-co-host of the second episode of The Ben Stiller Show. He also appeared as a relative of Peggy Bundy on the Married... with Children show where he and his wife dropped one of their numerous offspring on the Bundys.[6]

Goldthwait appeared on Late Night with Conan O'Brien in 1993, where he tossed furniture and ran around the set, then into the audience. He has also made several guest appearances on talk shows as well as comedy programs. On May 9, 1994, Goldthwait appeared on The Tonight Show with Jay Leno, where he briefly lit the guest chair on fire.[7] As a result, he was fined $2,700 plus the cost of the chair ($698); he was also required to tape several public service announcements about fire safety.[7] The incident was later the basis of the plot for his subsequent appearance on The Larry Sanders Show and also inspired a pseudo-fire safety PSA on MadTV. He was also in the 5th episode of Space Ghost Coast to Coast, "Bobcat", "Surprise", the 37th episode, "Anniversary" and an uncredited appearance in the episode "Kentucky Nightmare".

One of the most recognizable features of Goldthwait's performances is his voice. He has voiced characters on the television series Capitol Critters (1992), The Moxy Show (1995), Unhappily Ever After (1995–1999), The Tick (1995), Hercules, Hercules: The Animated Series (1998–1999), Lilo & Stitch: The Series and Buzz Lightyear of Star Command (2000). Goldthwait has also appeared as himself hosting the comedy quiz show Bobcat's Big Ass Show (1998). Goldthwait was also a semi-regular guest in the later seasons of the Tom Bergeron-version of Hollywood Squares in 1998.[5] 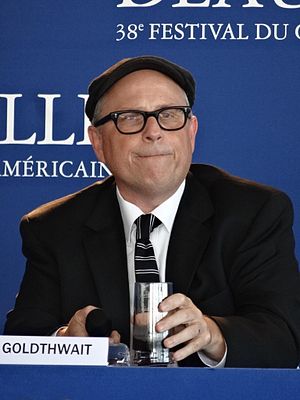 Goldthwait was a featured guest on the August 20, 2009, episode of Adam Carolla's podcast. And on August 26, 2009 he returned to guest on Jimmy Kimmel Live! with old friend Robin Williams during which he revealed a tattoo on his buttocks of an anthropomorphized cymbal with a mustache and slanted eyes (a pun on the Chinese symbol tattoo).

Goldthwait appeared in September 2010 on an episode of LA Ink, where shop owner Kat Von D gave him a tattoo of a potato, impaled on a fork, on his upper right arm. Goldthwait chose the design to remind himself of where he came from and to tell close friends and family that he hasn't lost his sense of humor. He also displayed his older tattoo of a cymbal with a moustache on his buttocks.

Goldthwait appeared on the May 4, 2012 episode of Real Time with Bill Maher.[5] Goldthwait was a voice guest in Season 4 of Adventure Time. He voices Ed in the episode "Web Weirdos".[5] Goldthwait appeared on NPR's Wait Wait... Don't Tell Me! on May 12, 2012 to talk about his movie God Bless America and play the game "Not My Job" (he won).[8] He then made his debut as one of the show's panelists on the July 14, 2012.

In 2012, he voiced a character known as Pop Fizz, an overexcited gremlin chemist with the ability to drink his potion and become a rampaging monster, for the hit video games Skylanders: Giants and Skylanders: SWAP Force.

Goldthwait's third feature film Sleeping Dogs Lie (originally titled Stay) starring Melinda Page Hamilton was in the 2006 Sundance Film Festival and was part of the "Independent Dramatic Features" competition. Sleeping Dogs Lie is about a youthful, impulsive instance of oral sex performed on a dog which opens the door to a black comedy about the complexities of honesty. It was also nominated for the Grand Jury Prize in the "Dramatic Features" category. The film was bought by Roadside Attractions & Samuel Goldwyn Films at the 2006 Sundance Film Festival for the North American rights to the film, and was released on October 20, 2006. Gaumont bought the international rights to the film. It was released on February 21, 2007 by Gaumont in France, and on March 16, 2007 in the UK. On May 4, 2007, it was presented as John Waters' annual selection of a favorite film within Maryland Film Festival.

Goldthwait's fourth feature film, World's Greatest Dad, was released on July 24, 2009 on video-on-demand providers before its limited theatrical release on August 21. It starred Robin Williams, Daryl Sabara, and Alexie Gilmore. The web site for the 2009 Sundance Film Festival described it as a "lusciously perverse, and refreshingly original comedy that tackles love, loss, and our curious quest for infamy". Roger Ebert of the Chicago Sun-Times gave World's Greatest Dad 3 out of 4 stars, but commented that the material could have been even darker in its satire, and he questioned whether it was the director's intention.

Willow Creek premiered at the 2013 Independent Film Festival of Boston and screened within such festivals as Maryland Film Festival. The film made its debut on the West Coast at the Arcata Theater Lounge in Arcata, California, on May 31, 2013, near its filming location of Willow Creek, California. Many of the cast and crew were on hand with Goldthwait for a question and answer session after the showing.On July 20, 2013 Willow Creek had its international premier at the Fantasia Festival in Montreal. After the movie Goldthwait stayed for a question and answer session. On October 22, 2013, Bobcat was in attendance at the Portland, Oregon Premier of Willow Creek. The Historic Hollywood theater hosted the packed house event. Bobcat, along with Cliff Barackman, cast member of Animal Planet's Finding Bigfoot, answered questions after the showing. Barackman was originally in Willow Creek but due to editing, his scenes were cut from the film.

In 2015, Goldthwait premiered Call Me Lucky, his documentary on the life and work of comedian/activist Barry Crimmins, at the Sundance Film Festival.[9]

Goldthwait has been married twice. His marriage to his first wife Ann Luly lasted from 1986 to 1998 and resulted in the birth of their daughters named Tasha and Taylor.

Goldthwait was married to Sarah de Sa Rego and was best friends with Robin Williams, whose co-star on The Crazy Ones, Sarah Michelle Gellar, got the part through her friendship with de Sa Rego.[12] [13]

In June, 2015, Bobcat Goldthwait was named “Filmmaker on the Edge” at the 17th Annual Provincetown International Film Festival. John Waters presented the prize.