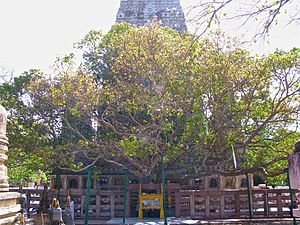 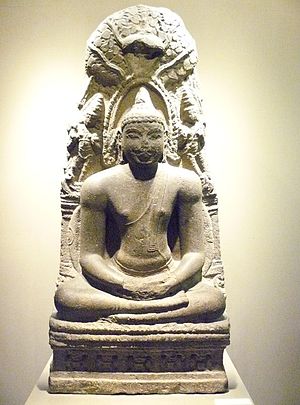 Sculpture of the Buddha meditating under the Mahabodhi tree 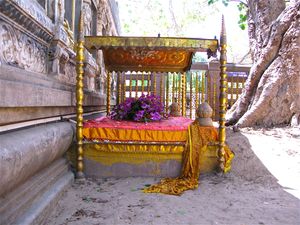 The Vajrashila, where the Buddha sat under the Bodhi Tree in Bodh Gaya

Lua error in Module:Coordinates at line 668: callParserFunction: function "#coordinates" was not found. The Bodhi Tree (Sanskrit: बोधि; and Pali) the word Bodhi means enlightenment and Bodhi tree means tree of enlightenment. Bodhi tree is Ficus religiosa tree native to Indian Subcontinent and is a sacred tree in Buddhism, Hinduism and Jainism.[1][2] The Ficus religiosa or Bodhi tree located in Bodh Gaya is notable tree under which Siddhartha Gautama, the spiritual teacher later known as Buddha, is said to have attained enlightenment, or Bodhi. In religious iconography, the Bodhi tree is recognizable by its heart-shaped leaves, which are usually prominently displayed. Bodhi trees are planted in close proximity to every Buddhist monastery in South Asia.

The term "Bodhi Tree" is also widely applied to currently existing trees, particularly the Sacred Fig (Ficus religiosa) growing at the Mahabodhi Temple in Bodh Gaya, which is a direct descendant planted in 288 BC from the original specimen. This tree is a frequent destination for pilgrims, being the most important of the four main Buddhist pilgrimage sites. Other holy Bodhi trees which have a great significance in the history of Buddhism are the Anandabodhi tree in Sravasti and the Bodhi tree in Anuradhapura, Sri Lanka. Both are believed to have been propagated from the original Bodhi tree. Bodhi trees are planted in close proximity to every Buddhist monastery.

On December 8, Bodhi Day celebrates Buddha's enlightenment underneath the Bodhi Tree. Those who follow the Dharma greet each other by saying, “Budu saranai!” which translates to "may the peace of the Buddha be yours.”[3]

The Bodhi tree at the Mahabodhi Temple is called the Sri Maha Bodhi. Gautama Buddha attained enlightenment (bodhi) while meditating underneath a Ficus religiosa. According to Buddhist texts the Buddha, meditated without moving from his seat for seven days under this tree. A shrine, called Animisalocana cetiya, was later erected on the spot where he sat.[4] 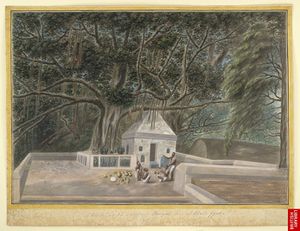 A small temple beneath the Bodhi tree, Bodh Gaya, built in 7th century, after the original built by King Ashoka in 3rd century BCE, c. 1810[5] 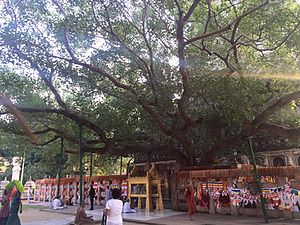 The Mahabodhi tree in Bodhgaya

The spot was used as a shrine even in the lifetime of the Buddha. King Ashoka was most diligent in paying homage to the Bodhi tree, and held a festival every year in its honour in the month of Kattika.[6] His queen, Tissarakkhā was jealous of the Tree, and three years after she became queen (i.e., in the nineteenth year of Asoka's reign), she caused the tree to be killed by means of mandu thorns.[7] The tree, however, grew again, and a great monastery was attached to the Bodhimanda called the Bodhimanda Vihara. Among those present at the foundation of the Mahā Thūpa are mentioned thirty thousand monks from the Bodhimanda Vihara, led by Cittagutta.[8]

The tree was again cut down by King Pushyamitra Shunga in the 2nd century BC, and by King Shashanka in 600 AD. Every time the tree was destroyed, a new tree was planted at the same place.[9] In 1881 a British archaeologist planted a Bodhi tree at Bodh Gaya after the previous one had died due to old age.[10]

Buddhist recounts that while the Buddha was still alive, in order that people might make their offerings in the name of the Buddha when he was away on pilgrimage, he sanctioned the planting of a seed from the Bodhi tree in Bodhgaya in front of the gateway of Jetavana Monastery near Sravasti. For this purpose Moggallana took a fruit from the tree as it dropped from its stalk, before it reached the ground. It was planted in a golden jar by Anathapindika with great pomp and ceremony. A sapling immediately sprouted forth, fifty cubits high, and in order to consecrate it the Buddha spent one night under it, rapt in meditation. This tree, because it was planted under the direction of Ananda, came to be known as the Ananda Bodhi.

King Asoka’s daughter, the nun Sanghamittra, brought a piece of the tree with her to Sri Lanka where it is continuously growing until this day in the island’s ancient capital, Anuradhapura.[10] The Bodhi tree that is growing in Sri Lanka to this day was originally named Jaya Sri Maha Bodhi, and was a piece of another Bodhi tree planted in the year 245 B.C.[11] Although the original Bodhi tree deteriorated and died of old age, the descendants of the branch that was brought by Emperor Ashoka’s son, Mahinda and his daughter, Sanghmitta, can still be found on the island.[12]

According to the Mahavamsa, the Sri Maha Bodhi in Sri Lanka was planted in 288 BC, making it the oldest verified specimen of any angiosperm. In this year (the twelfth year of King Asoka's reign) the right branch of the Bodhi tree was brought by Sanghamittā to Anurādhapura and placed by Devānāmpiyatissa his left foot in the Mahāmeghavana. The Buddha, on his death bed, had resolved five things, one being that the branch which should be taken to Ceylon should detach itself.[6] From Gayā, the branch was taken to Pātaliputta, thence to Tāmalittī, where it was placed in a ship and taken to Jambukola, across the sea; finally it arrived at Anuradhapura, staying on the way at Tivakka. Those who assisted the king at the ceremony of the planting of the Tree were the nobles of Kājaragāma and of Candanagāma and of Tivakka.

The Jaya Sri Maha Bodhi is also known to be the most sacred Bodhi tree. This came upon the Buddhists who performed rites and rituals near the Bodhi tree. The Bodhi tree was known to cause rain and heal the ill. When an individual became ill, one of his or her relatives would visit the Bodhi tree to water it seven times for seven days and to vow on behalf of the sick for a speedy recovery.[13]

In 1913, Anagarika Dharmapala took a sapling of the Sri Maha Bodhi to Hawaiʻi, where he presented it to his benefactor, Mary Foster, who had funded much Buddhist missionary work. She planted it in the grounds of her house in Honolulu, by the Nuʻuanu stream. On her death she left her house and its grounds to the people of Honolulu, and it became the Foster Botanical Garden. 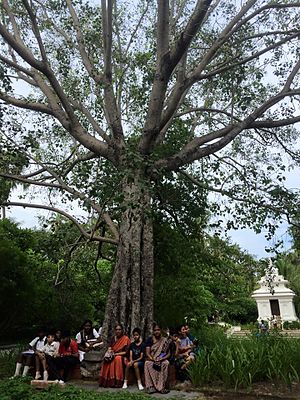 In 1950, Jinarajadasa took three saplings of the Sri Maha Bodhi to plant two samplings in Chennai, one was planted near the Buddha temple at Theosophical Society another at the riverside of Adyar Estuary. The third was planted near a meditation center in Sri Lanka.[14]

In 2012, Brahmanda Pratap Barua Ripon, Dhaka, Bangladesh took a sapling of Bodhi tree from Buddha Gaya, Maha Bodhi to Thousand Oaks, California, where he presented it to his benefactor, Anagarika Glenn Hughes, who had funded much Buddhist work and teaches Buddhism in USA. He and his students received the sapling with a great thanks, later they planted the sapling in the ground in a nearby park.

The trees of previous Buddhas

According to the Mahavamsa,[15] branches from the Bodhi trees of all the Buddhas born during this kalpa were planted in Ceylon (Sri Lanka) on the spot where the sacred Bodhi tree stands today in Anurādhapura. The branch of Kakusandha's tree was brought by a nun called Rucānandā, Konagamana's by Kantakānandā (or Kanakadattā), and Kassapa's by Sudhammā.

Prayer beads are made from the seeds of Ficus religiosa, considered sacred because of the closeness to Buddha himself and his enlightenment. 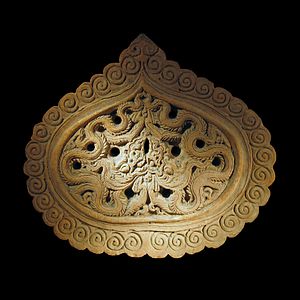