Bournville /ˈbɔːnvɪl/ is a model village on the south side of Birmingham, England, best known for its connections with the Cadbury family and chocolate – including a dark chocolate bar branded Bournville. It is also a ward within the council constituency of Selly Oak and home to the Bournville Centre for Visual Arts. Research by the Joseph Rowntree Foundation has found that it is "one of the nicest places to live in Britain".[2] 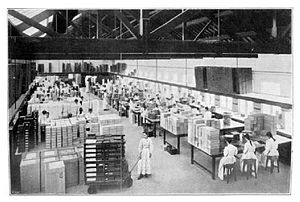 The packing room at Bournville, circa 1903

Originally the area that was to become Bournville consisted of a few scattered farmsteads and cottages, linked by winding country lanes, with the only visual highlight being the Georgian built Bournbrook Hall.

The bluebell glades of Stock Wood were said to be a relic of the Forest of Arden and there are Roman remains nearby.

Though Selly Manor and Minworth Greaves date back to the 14th century or earlier, they were each moved to Bournville in the 20th century, and are operated as a museum.[3]

Having taken over their father John Cadbury's expanding business in 1861, the Quakers George and Richard Cadbury needed to move their cocoa and chocolate factory from Bridge Street in central Birmingham to a greenfield site to allow for expansion.

Cadbury were reliant on the canals for milk delivery, and on the railways for cocoa deliveries from the ports of London and Southampton. They therefore needed a site which was undeveloped and had easy access to both canal and rail. The brothers noticed the proposed development of the Birmingham West Suburban Railway, which would extend from central Birmingham south along the path of the Worcester and Birmingham Canal into the then green fields of southern Birmingham and the villages of northern Worcestershire.

In 1879, they moved their business to Bournbrook Hall, 4 miles (6.4 km) to the south of Birmingham. The location was chosen as it was regarded as cleaner, healthier and more amenable to longer-term expansion plans. Although rural, it was also already serviced by the new Stirchley Street railway station, which itself was located right next to the canal.

The Cadburys named the area 'Bournville' after the Bourn Brook (now known as The Bourn); with 'ville' being French for 'town'; this set Bournville apart from the local area (some people mistakenly believe Bournville was originally known as Bournbrook - Bournbrook exists as a separate area to the north of Bournville). Then the Cadburys began to develop their factory in the new suburb. Loyal and hard-working workers were treated with great respect and relatively high wages and good working conditions; Cadbury also pioneered pension schemes, joint works committees and a full staff medical service.

In 1893, George Cadbury bought 120 acres (0.5 km²) of land close to the works and planned, at his own expense, a model village which would 'alleviate the evils of modern, more cramped living conditions'. By 1900, the estate included 313 cottages and houses set on 330 acres (1.3 km2) of land, and many more similar properties were built in the years leading up to the First World War, with smaller developments taking place later on in the 20th century. These almost 'Arts and Crafts' houses were traditional in design but with large gardens and modern interiors, and were designed by the resident architect William Alexander Harvey. These designs became a blueprint for many other model village estates around Britain. It is also noteworthy that, because George Cadbury was a temperance Quaker, no public houses have ever been built in Bournville; however, since the late 1940s, there has been a licensed members' bar at Rowheath Pavilion. 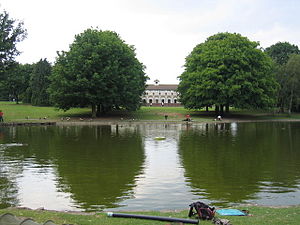 Rowheath lake with pavilion in the background

The Cadburys were particularly concerned with the health and fitness of their workforce, incorporating park and recreation areas into the Bournville village plans and encouraging swimming, walking and indeed all forms of outdoor sports.[4] In the early 1920s, extensive open lands were purchased at Rowheath and laid to football and hockey pitches together with a grassed running track. Rowheath Pavilion was designed and built in accordance with the instructions of George Cadbury and opened in July 1924. At that time, it served as the clubhouse and changing rooms for the acres of sports playing fields, several bowling greens, a fishing lake and an outdoor swimming lido, a natural mineral spring forming the source for the lido's healthy waters. The Rowheath Pavilion itself, which still exists, was used for balls and dinners and the whole area was specifically for the benefit of the Cadbury workers and their families with no charges for the use of any of the sporting facilities by Cadbury employees or their families. The lido was eventually closed in the 1970s after complaints of noise disturbance were made by residents of the newly built Oak Farm estate, coupled with new and stringent health and safety regulations relating to outdoor public swimming facilities. Cadbury's also built the Bournville indoor swimming baths on Bournville Lane (separate buildings for 'girls' and men), the Valley pool boating lake and the picturesque cricket pitch adjacent to the factory site, that was made famous as the picture on boxes of Milk Tray chocolates throughout the 1950s and early 1960s. 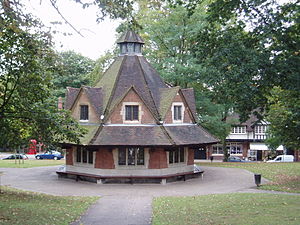 Bournville Rest House was built to celebrate the Silver Wedding Anniversary of George and Elizabeth Cadbury, and was paid for by the employees of Cadbury Brothers Ltd. The design is by William Alexander Harvey, who was architect of many of the buildings on the estate and is based on the 17th century Yarn Market in Dunster, Somerset. Currently, the building houses the Visitors Centre for the Carillon.

An almost campus feel evolved, with a triangular village green, infant and junior schools, the School of Art and the Day Continuation School (originally intended for young Cadbury employees) and a host of events such as fêtes and Maypole dances. The carillon and a Quaker meeting house are also beside the village green.

The trust continues to exercise an international influence on housing and town planning generally. Now containing 7,800 homes on 1,000 acres (4 km²) of land with 100 acres (0.4 km²) of parks and open spaces, Bournville remains a popular residential area of Birmingham.

Cadbury is still one of Birmingham's main employers, making all manner of chocolate products.

The dark chocolate Bournville Plain is now manufactured in France and sold in the UK.

Bournville has adopted a Ward Support Officer with the current holder of the title being Karen Stevens.

The 2001 Population Census found that 25,462 people were living in Bournville with a population density of 4,217 people per km² compared with 3,649 people per km² for Birmingham. Bournville had an area of 639.8 hectares, and within this, it has a population density of 39.8 people per hectare. 52.9% of the population was identified as female, above the city average of 51.6%. A number of students from The University of Birmingham live there, although not as many as in the nearby wards of Selly Oak and Edgbaston.

98.3% of the residents lived in households, equal to the city average and 0.1% higher than the national average. The other 1.7% lived in communal establishments. The total number of occupied households was 11,032, resulting in an average number of people per household of 2.3. This is below the city average of 2.5 and national average of 2.4. 62.5% of the occupied households were occupied by the owner and a further 15.4% were rented from a housing association. Terraced houses were the most common form of houses at 38.9%, followed by semi-detached houses at 32.9%.

Although Bournville is most famous for its turn-of-the-20th century Cadbury style homes, a significant amount of more modern stock also exists in the area — not all of which was built by Cadbury's. The local authority built several homes around Bournville before and after the Second World War. Bryant Homes built a collection of upmarket and mostly detached houses in the west of Bournville during the 1970s.

Primary schools in the area include Bournville Junior School, Bournville Infant School and St Francis Primary School. St Francis has 243 children on roll and was opened in 1979 and the 26 place nursery was officially opened by Professor Tim Brighouse in November 1998.[6]

Dame Elizabeth Cadbury has a secondary school and sixth form named after her in Bournville. Opened in 1955 located on Woodbrook Road. The school badge shows the Bourne brook flanked by a tree each side.

Bournville School is a secondary school in the Birmingham Local Education Authority area. It is a comprehensive school with a sixth form centre. In April 2007, the school received Music College status as well as already having Specialist Business Enterprise College status.[7] Bournville is served by Bournville College of Further Education, which features a sixth form college and higher education programmes.[8] The college relocated to a new campus in Longbridge in September 2011 at a cost of £66 million, kick-starting wider regeneration of the area after the collapse of MG Rover in 2005.[9]

The Bournville Centre for Visual Arts, located at Ruskin Hall on Linden Road, has been part of the Birmingham Institute of Art and Design (BIAD) at Birmingham City University since 1988. It offers undergraduate, foundation and self-development courses.

Bournville lies on the A4040, the ring road developed in the 1920s and served by the 11A and 11C Birmingham Outer Circle bus routes. The 27 (Hawkesley to Maypole) and 84 (Hawkesley to Queen Elizabeth Hospital) bus services also serve the area.

The National Cycle Network route five passes near Bournville (map) towards Hurst Street in the City Centre. The Worcester and Birmingham Canal towpath can be joined at the railway station and serves as a de facto cycle route to Brindleyplace.

Christian churches in Bournville include St Francis of Assisi Church which is also the Anglican parish church. The ward is also served by a joint Church of England and Methodist venture in the church dedicated to Saint Andrew [10] and Oak Tree Church,[11] meeting at Dame Elizabeth Hall. 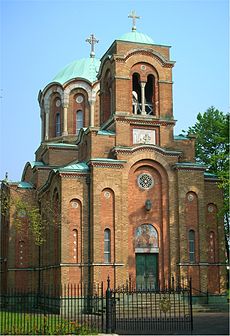 There is a purpose-built Serbian Orthodox Church of St. Lazar, known by its members as Lazarica, formally the Church of the Holy Prince Lazar and is to be found in Cob Lane. The church is built in the traditional Byzantine style of the Balkans and is consciously modelled on some famous examples. The interior is decorated in the full scheme of the Orthodox Tradition with wall-paintings alfresco. The priest resides in Stockholm, Sweden and is a member of the Serbian Orthodox Diocese of Scandinavia and Great Britain, which comes under the jurisdiction of the Patriarchate in Belgrade.

As Bournville was founded by Quakers, a meeting house was built. Being intended also to serve other Christian denominations, it was equipped with an organ, which would not normally be expected in a Quaker meeting house in Britain. The Bournville Friends Meeting House is located on Linden Road, and features a bust of George Cadbury by Francis Wood, installed in 1924.[12] The building, designed by William Alexander Harvey, was constructed in 1905.[13]