From Infogalactic: the planetary knowledge core
Jump to: navigation, search
This article is about the Hindu god of creation. For other uses, see Brahma (disambiguation).
For the genderless metaphysical concept of Ultimate Reality in Hindu philosophy, see Brahman.

Brahma (/ˈbrəmɑː/; Brahmā) is the creator god in the Trimurti of Hinduism. He has four faces, looking in the four directions.[1] Brahma is also known as Svayambhu (self-born),[5] Vāgīśa (Lord of Speech), and the creator of the four Vedas, one from each of his mouths.[1][6] Brahma is identified with the Vedic god Prajapati, as well as linked to Kama and Hiranyagarbha (the cosmic egg),[7][8] he is more prominently mentioned in the post-Vedic Hindu epics and the mythologies in the Puranas. In the epics, he is conflated with Purusha.[1] Brahma, along with Vishnu and Shiva, is part of a Hindu Trinity, however, ancient Hindu texts mention other trinities of gods or goddesses which does not include Brahma.[9][10][note 1]

While Brahma is often credited as the creator of the universe and various beings in it, several Puranas describe him being born from a lotus emerging from the navel of the god Vishnu. Other Puranas suggest that he is born from Shiva or his aspects,[12] or he is a supreme god in diverse versions of Hindu mythology.[7] Brahma, along with Vishnu and Shiva, is also viewed as a different form of Brahman, the ultimate formless metaphysical reality and cosmic soul in Hinduism.[10][8]

Brahma does not enjoy popular worship in present-age Hinduism and has lesser importance than the other members of the Trimurti, Vishnu and Shiva. Brahma is revered in ancient texts, yet rarely worshipped as a primary deity in India.[13] Very few temples dedicated to him exist in India; the most famous being the Brahma Temple, Pushkar in Rajasthan.[14] Brahma temples are found outside India, such as in Thailand at the Erawan Shrine in Bangkok.[15] 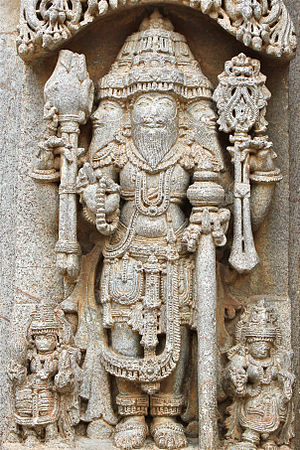 The origins of Brahma are uncertain, in part because several related words such as one for Ultimate Reality (Brahman), and priest (Brahmin) are found in the Vedic literature. The existence of a distinct deity named Brahma is evidenced in late Vedic text.[16] A distinction between spiritual concept of Brahman, and deity Brahma, is that the former is gender neutral abstract metaphysical concept in Hinduism,[17] while the latter is one of the many masculine gods in Hindu mythology.[18] The spiritual concept of Brahman is far older, and some scholars suggest deity Brahma may have emerged as a personal conception and visible icon of the impersonal universal principle called Brahman.[16]

In Sanskrit grammar, the noun stem brahman forms two distinct nouns; one is a neuter noun bráhman, whose nominative singular form is brahma; this noun has a generalized and abstract meaning.[19]

Contrasted to the neuter noun is the masculine noun brahmán, whose nominative singular form is Brahma.[note 2] This noun is used to refer to a person, and as the proper name of a deity Brahma it is the subject matter of the present article.

One of the earliest mention of Brahma with Vishnu and Shiva is in the fifth Prapathaka (lesson) of the Maitrayaniya Upanishad, probably composed in late 1st millennium BCE. Brahma is discussed in verse 5,1 also called the Kutsayana Hymn first, and expounded in verse 5,2.[20][21]

In the pantheistic Kutsayana Hymn,[20] the Upanishad asserts that one's Soul is Brahman, and this Ultimate Reality, Cosmic Universal or God is within each living being. It equates the Atman (Soul, Self) within to be Brahma and various alternate manifestations of Brahman, as follows, "Thou art Brahma, thou art Vishnu, thou art Rudra (Shiva), thou art Agni, Varuna, Vayu, Indra, thou art All."[20][22]

In verse 5,2 Brahma, Vishnu and Shiva are mapped into the theory of Guṇa, that is qualities, psyche and innate tendencies the text describes can be found in all living beings.[22][23] This chapter of the Maitri Upanishad asserts that the universe emerged from darkness (Tamas), first as passion characterized by action qua action (Rajas), which then refined and differentiated into purity and goodness (Sattva).[20][22] Of these three qualities, Rajas is then mapped to Brahma, as follows:[24]

While the Maitri Upanishad maps Brahma with one of the elements of Guṇa theory of Hinduism, the text does not depict him as one of the trifunctional elements of the Hindu Trimurti idea found in later Puranic literature.[25] 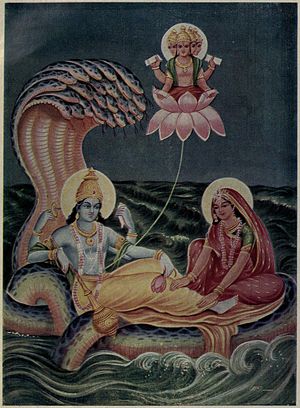 In Puranic mythology, Brahma emerges from a lotus risen from Vishnu's navel while he rests on the serpent Shesha

The post-Vedic texts of Hinduism offer multiple theories of cosmogony, many involving Brahma. These include Sarga (primary creation of universe) and Visarga (secondary creation), ideas related to the Indian thought that there are two levels of reality, one primary that is unchanging (metaphysical) and other secondary that is always changing (empirical), and that all observed reality of the latter is in an endless repeating cycle of existence, that cosmos and life we experience is continually created, evolved, dissolved and then re-created.[26] The primary creator is extensively discussed in Vedic cosmogonies with Brahman or Purusha or Devi among the terms used for the primary creator,[26][27] while the Vedic and post-Vedic texts name different gods and goddesses as secondary creators (often Brahma in post-Vedic texts), and in some cases a different god or goddess is the secondary creator at the start of each cosmic cycle (kalpa, aeon).[26][28]

Brahma is a "secondary creator" as described in the Mahabharata and Puranas, and among the most studied and described.[29][30][31] Born from a lotus emerging from the navel of Vishnu, Brahma creates all the forms in the universe, but not the primordial universe itself.[32] In contrast, the Shiva-focussed Puranas describe Brahma and Vishnu to have been created by Ardhanarishvara, that is half Shiva and half Parvati; or alternatively, Brahma was born from Rudra, or Vishnu, Shiva and Brahma creating each other cyclically in different aeons (kalpa).[33] Thus in most Puranic texts, Brahma's creative activity depends on the presence and power of a higher god.[34]

In the Bhagavata Purana, Brahma is portrayed several times as the one who rises from the "Ocean of Causes".[35] Brahma, states this Purana, emerges at the moment when time and universe is born, inside a lotus rooted in the navel of Hari (deity Vishnu, whose praise is the primary focus in the Purana). The myth asserts that Brahma is drowsy, errs and is temporarily incompetent as he puts together the universe.[35] He then becomes aware of his confusion and drowsiness, meditates as an ascetic, then realizes Hari in his heart, sees the beginning and end of universe, and then his creative powers are revived. Brahma, states Bhagavata Purana, thereafter combines Prakriti (nature, matter) and Purusha (spirit, soul) to create a dazzling variety of living creatures, and tempest of casual nexus.[35] The Bhagavata Purana thus attributes the creation of Maya to Brahma, wherein he creates for the sake of creation, imbuing everything with both the good and the evil, the material and the spiritual, a beginning and an end.[36]

The Puranas describe Brahma as the deity creating time. They correlate human time to Brahma's time, such as a mahākalpa being a large cosmic period, correlating to one day and one night in Brahma's existence.[34]

The stories about Brahma in various Puranas are diverse and inconsistent. In Skanda Purana, for example, goddess Parvati is called the "mother of the universe", and she is credited with creating Brahma, gods and the three worlds. She is the one, states Skanda Purana, who combined the three Gunas - Sattva, Rajas and Tamas - into matter (Prakrti) to create the empirically observed world.[37]

The Vedic discussion of Brahma as a Rajas-quality god expands in the Puranic and Tantric literature. However, these texts state that his wife Saraswati has Sattva (quality of balance, harmony, goodness, purity, holistic, constructive, creative, positive, peaceful, virtuous), thus complementing Brahma's Rajas (quality of passion, activity, neither good nor bad and sometimes either, action qua action, individualizing, driven, dynamic).[38][39][40] 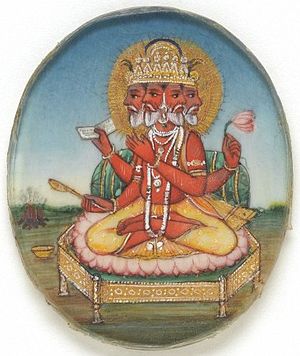 A 19th century roundel of Brahma, depicts him as a four-headed, red-complexioned aged man, who holds the Vedas, a ladle and a lotus in his hands.

Brahma is traditionally depicted with four faces and four arms.[41] Each face of his points to a cardinal direction. His hands hold no weapons, rather symbols of knowledge and creation. In one hand he holds the sacred texts of Vedas, in second he holds mala (rosary beads) symbolizing time, in third he holds a ladle symbolizing means to feed sacrificial fire, and in fourth a utensil with water symbolizing the means where all creation emanates from. His four mouths are credited with creating the four Vedas.[1] He is often depicted with a white beard, implying his sage like experience. He sits on lotus, dressed in white (or red, pink), with his vehicle (vahana) – hansa, a swan or goose – nearby.[41][42]

Chapter 51 of Manasara-Silpasastra, an ancient design manual in Sanskrit for making Murti and temples, states that Brahma statue should be golden in color.[4] The text recommends that the statue have four faces and four arms, have jata-mukuta-mandita (matted hair of an ascetic), and wear a diadem (crown).[4] Two of his hands should be in refuge granting and gift giving mudra, while he should be shown with kundika (water pot), akshamala (rosary), a small and a large sruk-sruva (laddles used in yajna ceremonies).[4] The text details the different proportions of the murti, describes the ornaments, and suggests that the idol wear chira (bark strip) as lower garment, and either be alone or be accompanied with goddesses Sarasvati on his right and Savitri on his left.[4]

Brahma's consort is the goddess Saraswati. She is considered to be "the embodiment of his power, the instrument of creation and the energy that drives his actions".[43] 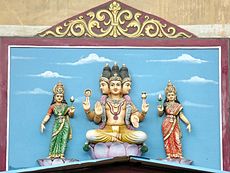 Though almost all Hindu religious rites involve prayer to Brahma, very few temples are dedicated to his worship. Among the most prominent is Brahma Temple, Pushkar. Once a year, on Kartik Poornima, the full moon night of the Hindu lunar month of Kartik (October – November), a religious festival is held in Brahma's honour. Thousands of pilgrims come to bathe in the holy Pushkar Lake adjacent to the temple. There is a temple in Asotra village in Balotra taluka of Rajasthan's Barmer district, which is known as Kheteshwar Brahmadham Tirtha.

Temples to Brahma also exist in Tirunavaya in Kerala. The Trimurti temple and the temple dedicated to Brahma accompanied by Ganesha, located outside Padmanabhaswamy Temple in Thiruvananthapuram, Kerala, is also famous. He is also a part of the Trimurti in Thripaya Trimurti Temple and Mithrananthapuram Trimurti Temple in Kerala. Regular pujas are held for Brahma at the temple in Tirunavaya, and during Navratris, this temple comes to life with multi-varied festivities.

There is a temple dedicated to Brahma in the temple town of Srikalahasti near Tirupati, Andhra Pradesh.

In the coastal state of Goa, a shrine belonging to the fifth century, in the small and remote village of Carambolim in the Sattari Taluka in the northeast region of the state is found.

Famous murti of Brahma exists at Mangalwedha, 52 km from the Solapur district of Maharashtra and in Sopara near Mumbai.

There is a 12th century temple dedicated to him in Khedbrahma, Gujarat.

Other temples dedicated to Brahma 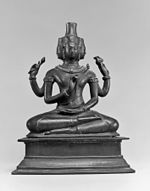 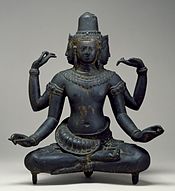 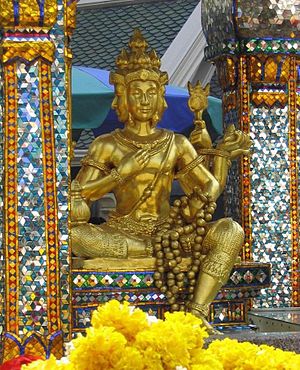 The largest and most famous shrine to Brahma may be found in Cambodia's Angkor Wat.[citation needed] One of the three largest temples in the 9th-century Prambanan temples complex in Yogyakarta, central Java (Indonesia) is dedicated to Brahma, the other two to Shiva (largest of three) and Vishnu respectively.[44] The temple dedicated to Brahma is on southern side of Śiva temple.

A statue of Brahma is present at the Erawan Shrine in Bangkok, and continues to be revered in modern times.[15] The golden dome of the Government House of Thailand also contains a statue of Phra Phrom (Thai representation of Brahma). An early 18th-century painting at Wat Yai Suwannaram in Phetchaburi city of Thailand shows Brahma.[45]

The country name of Burma is derived from Brahma, and in medieval texts it is referred to as Brahma-desa.[46][47]