The California Air Resources Board, also known as CARB or ARB, is the "clean air agency" in the government of California. Established in 1967 when then-governor Ronald Reagan signed the Mulford-Carrell Act, combining the Bureau of Air Sanitation and the Motor Vehicle Pollution Control Board, CARB is a department within the cabinet-level California Environmental Protection Agency.

The stated goals of CARB include attaining and maintaining healthy air quality; protecting the public from exposure to toxic air contaminants; and providing innovative approaches for complying with air pollution rules and regulations. CARB has also been instrumental in driving innovation throughout the global automotive industry through programs such as its ZEV mandate.

One of CARB's responsibilities is to define vehicle emissions standards. California is the only state permitted to issue emissions standards under the federal Clean Air Act, subject to a waiver from the United States Environmental Protection Agency. Other states may choose to follow CARB or federal standards but may not set their own.[2]

In February, 2018, Mary D. Nichols, the Chair of CARB, threatened legal action if the Trump Administration moved to eliminate California's ability to set its "own clean air transportation standards."[3]

CARB's governing board is made up of 14 members, soon to be 16 with 2 members being non-voting.

Six of the governor-appointed board members are chosen from regional air pollution control or air quality management districts, including one each from[4]:

Three governor-appointed board members are experts in automotive engineering, currently Dan Sperling; science, agriculture, or law, currently John Eisenhut; and medicine, currently John R. Balmes, M.D.. The governor's three remaining appointees are members of the public, including an expert in air pollution control or one of the fields mentioned above.

The two legislature-appointed board members work directly with communities affected by air pollution. They are currently Diane Takvorian and Dean Florez, appointed by the Assembly and Senate respectively. 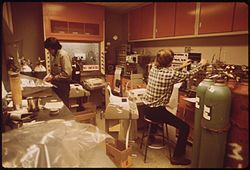 The division assesses the extent of California's air quality problems and the progress being made to abate them, coordinates statewide development of clean air plans and maintains databases pertinent to air quality and emissions. The division's technical support work provides a basis for clean air plans and CARB's regulatory programs. This support includes management and interpretation of emission inventories, air quality data, meteorological data and of air quality modeling.[6]

The Air Quality Planning and Science Division has five branches:

The Atmospheric Modeling & Support Section is one of three sections within the Modeling & Meteorology Branch. The other two sections are the Regional Air Quality Modeling Section and the Meteorology Section.[6]

The air quality and atmospheric pollution dispersion models[7][8] routinely used by this Section include a number of the models recommended by the U.S. Environmental Protection Agency (EPA). The section uses models which were either developed by CARB or whose development was funded by CARB, such as:

The CARB ZEV program was enacted by the California government to promote the use of zero emission vehicles.[12] The program goal is to reduce the pervasive air pollution affecting the main metropolitan areas in the state, particularly in Los Angeles, where prolonged pollution episodes are frequent.[13] The first ruling was the 1990 Low-Emission Vehicle (LEV I) Program.[13][14]

The first definition has its origin in the California ZEV rule, adopted as part of the 1990 Low-Emission Vehicle (LEV I) Program mandated by CARB.[13][14] The ZEV regulation has evolved and been modified several times since 1990, and several new partial or low-emission categories were created and defined as follows:[14][15][16][17]

The Low-Carbon Fuel Standard (LCFS) requires oil refineries and distributors to ensure that the mix of fuel they sell in the Californian market meets the established declining targets for greenhouse gas emissions measured in CO2-equivalent grams per unit of fuel energy sold for transport purposes. The 2007 Governor's LCFS directive calls for a reduction of at least 10% in the carbon intensity of California's transportation fuels by 2020. These reductions include not only tailpipe emissions but also all other associated emissions from production, distribution and use of transport fuels within the state. Therefore, California LCFS considers the fuel's full life cycle, also known as the "well to wheels" or "seed to wheels" efficiency of transport fuels.[13][23] The standard is aimed to reduce the state’s dependence on petroleum, create a market for clean transportation technology, and stimulate the production and use of alternative, low-carbon fuels in California.[24]

On April 23, 2009, CARB approved the specific rules for the LCFS that will go into effect in January 2011.[25][26] The rule proposal prepared by its technical staff was approved by a 9-1 vote, to set the 2020 maximum carbon intensity reference value to 86 grams of carbon dioxide released per megajoule of energy produced.[24][27]

The PHEV Research Center was launched with funding from the California Air Resources Board.