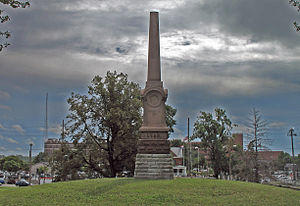 Monument to Nathaniel Lyon with the arsenal in the background

The Camp Jackson Affair was an incident in the American Civil War on 10 May 1861, when Union military forces captured a force of pro-secession state militia at Camp Jackson, just outside Saint Louis, Missouri, and subsequently clashed with pro-secession rioters in the city.

Missouri was a slave state, and many of its leaders favored secession and joining the Confederacy. However, there were relatively few slaves[citation needed] and slaveowners in Missouri, and only a minority favored secession.[citation needed] Over half the population of Saint Louis were immigrants, and most were recent German immigrants, who hated slavery and opposed secession. (Many were "Forty-Eighters" who had been active in the failed 1848 German revolution.)

Also in February, Missouri elected a Constitutional Convention, to amend the state constitution and decide the issue of secession. On 21 March, the Convention voted 98 to 1 against secession, but also voted not supply weapons or men to either side if war broke out. It then adjourned.

On 20 April, eight days after the start of the war at Fort Sumter, a pro-Confederate mob at Liberty, Missouri, seized the Liberty Arsenal and made off with about 1,000 rifles and muskets. This sparked fears that Confederates would also seize the much larger St. Louis Arsenal, which had nearly 40,000 rifles and muskets — the largest stockpile in any slave state.

Missouri was within the Western Department of the U.S. Army, commanded by Brigadier General William S. Harney, with headquarters in St. Louis. Harney, an elderly career officer, wished to avoid open conflict with the secessionist forces.

On 23 April, the War Department replaced Harney with Captain Nathaniel Lyon as acting Commander. Lyon, a passionate Unionist, immediately began enlisting and arming St. Louis Unionists as "Missouri Volunteers", an action previously ordered by the Secretary of War, but not acted on by General Harney. Most of Lyon's early recruits were "Forty-Eighters" and "Wide Awakes" (a marching society formed during the 1860 election by the Republican Party.) According to one estimate, 80% of the volunteers in the first Missouri Volunteer regiments were Germans.[1] The foreign-born, anti-slavery Germans were particularly hated by pro-slavery native-born Missourians.

Lyon's next action, by order of the War Department, was to move the arms held in the St. Louis Arsenal out of reach of Missouri secessionists. Early in the morning of 26 April, 21,000 rifles were loaded on the steamer City of Alton, which carried them across the Mississippi River to Illinois. The remainder were held for issue to Lyon's Missouri Volunteers.

Missouri Governor Claiborne Jackson had been elected on the ticket of the (Unionist) Douglas faction of the Democratic Party, but privately supported secession. Since the Convention had voted against secession, Jackson and his fellow secessionists decided to carry it out by seizing St. Louis by force and presenting the people of Missouri with a fait accompli. One obstacle was the Arsenal, which was also a fortress, with thick walls.

In mid-April Jackson wrote to Confederate President Jefferson Davis, asking for heavy artillery to breach the walls of the Arsenal. His letter was carried by militia officers Colton Green and Basil Wilson Duke.[2] Then around 1 May, Jackson called out part of the Missouri Volunteer Militia for "maneuvers" near St, Louis, under the command of Brigadier General Daniel M. Frost . The militia set up "Camp Jackson", about 4.5 miles northwest of the Arsenal. The campsite was located at Lindell's Grove (then outside the city of St. Louis, and today the site of the campus of St. Louis University on Lindell Boulevard).

Davis agreed to Jackson's request. On May 9, the steamer J.C. Swan delivered the Confederate aid: two 12-pound howitzers, two 32-pound siege guns, 500 muskets, and ammunition, in crates marked as Tamoroa marble. The munitions had been captured by the Confederates when they seized the Federal arsenal at Baton Rouge. MVM officers met the shipment at the St. Louis riverfront, and transported it to Camp Jackson, six miles inland.[3]

Lyon suspected the Camp Jackson force of conspiring to attack the Arsenal. His suspicions were confirmed by personal investigation after he visited Camp Jackson, allegedly disguised as an elderly woman. On 10 May, Lyon marched on Camp Jackson with about 6,000 Missouri Volunteers and U.S. Regulars. Lyon forced the surrender of the militia, taking 669 prisoners.

The militiamen refused to take an oath of allegiance to the United States. So Lyon placed them under arrest, and began marching them under guard to the Arsenal, where they were paroled and ordered them to disperse.

But the lengthy march was seen as humiliating by pro-secession residents of the city. Angry secessionists shouted insults at the Union troops, and threw rocks and debris at them. The heavily German Missouri Volunteer units were particularly targeted, with shouts of "Damn the Dutch!"[4]

This eventually led to gunfire. Exactly what provoked the shooting remains unclear, but the most common explanation is that a drunkard stumbled into the path of the marching soldiers, and fired a pistol into their ranks, fatally wounding Captain Constantin Blandowski of the Third Missouri Volunteers.[5] The Volunteers, in reaction, fired over the heads of the crowd, and then into the crowd. Some 28 people died, including some women and children; 50 more were wounded.

The incident sparked several days of disorders and animosity in St. Louis. On May 11, Volunteers were fired upon from windows at 5th and Walnut streets; they returned fire into the mob. Col. Henry Boernstein, commander of the 2nd Regiment of Missouri Volunteers, and publisher of the Anzeiger des Westens, a German-language newspaper in St. Louis and, remarked in his memoirs that he gave several of his men leave to visit their families on the morning of May 11 and that, “Most of them did not return... until it grew dark, with clothing torn, faces beaten bloody, and all the signs of having suffered mistreatment... Two of them never returned and they were never heard of again.”[6]

Rumors spread throughout the city that the Germans were planning to murder the American population of the city; many wealthy St. Louisians fled to Illinois or the Missouri interior.

Martial law was imposed, and with the arrival of Federal Regulars to relieve the German volunteers, the violence came to an end.

Nativism, mistrust of the Federal government, fears for and of slavery, and states rights issues all played roles in provoking the incident. The Affair polarized the state between Union and Confederate supporters. Previously most Missourians had advocated neutrality. However the Camp Jackson Affair forced most Missourians to take sides.

Nonetheless, Lyon's action ensured Union control of Missouri, After the war, the German Missouri Volunteers were praised as "saviors of Missouri."

Governor Jackson had proposed a "Military Bill" which would put the state on a war footing, create a new state military force, and grant the Governor wide executive powers. The bill had stalled, but on 11 May, the day after the Affair, it was passed by the Missouri General Assembly, creating the Missouri State Guard with Major General Sterling Price as its commander. Unionists described the bill as a "secession act in all but name". Critics also observed that since it stated that all adult men were to be considered to be reserves of the State Guard, and granted the Governor wide powers as commander of the Guard, it had the effect of making Governor Jackson dictator of the state.

Harney was reinstated as Commander of the Western District, and met with Price on 12 May. They signed the Price-Harney Truce, which left the Federal military in charge of St. Louis, and allowed state forces to maintain order in the rest of the state. Many Missouri Unionists considered the agreement to be a capitulation to Jackson and the secessionists. Unionists outside of St. Louis reported harassment by secessionists, many fleeing to St. Louis for refuge.

Frank Blair was Republican leader and former U.S. Representative from St. Louis. Now a colonel, he had been authorized by President Lincoln to relieve Harney at his discretion. On 30 May, Blair relieved Harney, who was permanently replaced by Lyon. Lyon was promoted to Brigadier General of Volunteers and assigned command of all the Union forces in Missouri.

On 11 June, at the Planter's House hotel in St. Louis, General Lyon met face-to-face with Governor Jackson. They argued for four hours (much of it over Jackson's powers under the Military Bill). Then Lyon abruptly ending the meeting declaring "This means war. In an hour one of my officers will call on you and conduct you out of my lines."[7]

Against the advice of his senior officers, Jackson exercised his authority as Commander-in-Chief and ordered the State Guard to make a stand at Boonville. In the resulting Battle of Boonville on 17 June, Lyon's troops routed the State Guard. Jackson, the State Guard, and a few secessionist state legislators retreated to southwest Missouri, near the Arkansas border, leaving most of the state under Federal control.

The Constitutional Convention reconvened on 22 July and declared the office of Governor vacant due to Jackson's absence.[8] The Convention then voted to appoint former Chief Justice of the Missouri Supreme Court and conservative Unionist Hamilton Rowan Gamble as Governor of the Provisional Government of Missouri. Gamble's government was recognized by the Lincoln administration.