Carmen is a novella by Prosper Mérimée, written and first published in 1845. It has been adapted into a number of dramatic works, including the famous opera by Georges Bizet.

According to a letter Mérimée wrote to the Countess of Montijo,[1] Carmen was inspired by a story she told him on his visit to Spain in 1830. He said, "It was about that ruffian from Málaga who had killed his mistress, who consecrated herself exclusively to the public. [...] As I have been studying the Gypsies for some time, I have made my heroine a Gypsy."[2]

An important source for the material on the Romani people (Gypsies) was George Borrow's book The Zincali (1841). Another source may have been the narrative poem The Gypsies (1824) by Alexander Pushkin, which Mérimée would later translate into French prose (Briggs 2008).

The novella comprises four parts. Only the first three appeared in the original publication in the October 1, 1845 issue of the Revue des Deux Mondes[3] (Robinson 1992); the fourth first appeared in the book publication in 1846. Mérimée tells the story as if it had really happened to him on his trip to Spain in 1830.

Part I. While searching for the site of the Battle of Munda in a lonely spot in Andalusia, Mérimée meets a man who his guide hints is a dangerous robber. Instead of fleeing, Mérimée befriends the man by sharing cigars and food. They stay in the same primitive inn that night. The guide tells Mérimée that the man is the robber known as Don José Navarro and leaves to inform on him, but Mérimée warns Don José, who escapes.

Part II. Later, in Córdoba, Mérimée meets Carmen, a beautiful Romani woman who is fascinated by his repeating watch. He goes to her home so she can tell his fortune, and she impresses him with her occult knowledge. They are interrupted by Don José, and although Carmen makes throat-cutting gestures, José escorts Mérimée out. Mérimée finds his watch is missing.

Some months later, again in Córdoba, a friend of Mérimée's tells him that Don José Navarro is to be garrotted the next day. Mérimée visits the prisoner and hears the story of his life.

Part III. Our robber's real name is José Lizarrabengoa, and he is a Basque hidalgo from Navarre. He killed a man in a fight resulting from a game of paume (presumably some form of Basque pelota) and had to flee. In Seville he joined a unit of dragoons, soldiers with police functions. 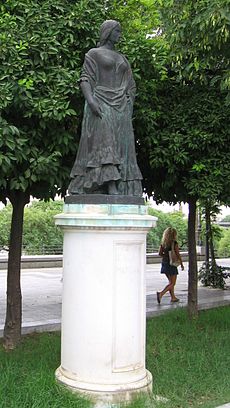 One day he met Carmen, then working in the cigar factory he was guarding. As he alone in his unit ignored her, she teased him. A few hours later, he arrested her for cutting x's in a co-worker's face in a quarrel. She convinced him by speaking Basque that she was half Basque, and he let her go, for which he was imprisoned for a month and demoted.

After his release, he encountered her again and she repaid him with a day of bliss, followed by another when he allowed her fellow smugglers to pass his post. He looked for her at the house of one of her Romani friends, but she entered with his lieutenant. In the ensuing fight, José killed the lieutenant. He fled to Carmen's outlaw band.

With the outlaws, he progressed from smuggling to robbery, and was sometimes with Carmen but suffered from jealousy as she used her attractions to further the band's enterprises; he also learned that she was married. After her husband joined the band, José provoked a knife fight with him and killed him. Carmen became José's wife.

However, she told him she loved him less than before, and she became attracted to a successful young picador named Lucas. José, mad with jealousy, begged her to forsake other men and live with him; they could start an honest life in America. She said that she knew from omens that he was fated to kill her, but "Carmen will always be free,"[4] and as she now hated herself for having loved him, she would never give in to him. He stabbed her to death and then turned himself in. Don José ends his tale by saying that the Romani are to blame for the way they raised Carmen.

Part IV. If readers expect a continuation of the story, perhaps with a description of José's execution, they will be surprised. This part consists of scholarly remarks on the Romani: their appearance, their customs, their conjectured history, and their language. According to Henri Martineau, editor of a collection of Mérimée's fiction, the etymologies at the end are "extremely suspect".

Differences from the opera

As the above summary and that of Bizet's opera indicate, the opera is based on part III of the story only and omits many elements, such as Carmen's husband. It greatly increases the role of other characters, such as the Dancaïre,[5] who is only a minor character in the story; the Remendado,[6] who one page after he is introduced is wounded by soldiers and then shot by Carmen's husband to keep him from slowing the gang down; and Lucas (renamed Escamillo and promoted to matador), who is seen only in the bull ring in the story. The opera's female singing roles other than Carmen—Micaëla, Frasquita, and Mercédès—have no counterparts in the novella. Carmen knows her fate not from reading cards but from interpreting such omens as a hare running between José's horse's legs.[citation needed]