The story of Carmen on Ice is very similar to the opera Carmen. Analogous to the four-act opera libretto the screenplay has four parts:[2] 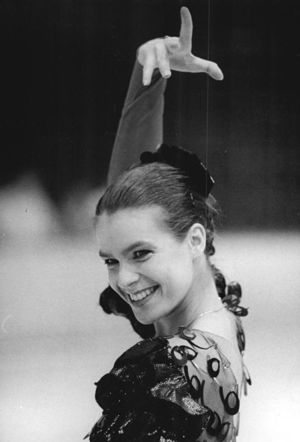 Katarina Witt as Carmen during her free skating in 1988

Carmen on Ice was filmed in Spain and Germany, citizens of Sevilla and Berlin played bit parts. In 1988 Katarina Witt, who played the title role, had won her second olympic gold medal at the winter games in Calgary with a free skating to Carmen. Brian Boitano, who played the part of Don José, became Olympic champion in the same year followed by Brian Orser, the Olympic silver medallist of 1988 and actor playing Escamillo. So, it was obvious to cast the film with these stars. Carmen on Ice was first presented in public on February 8, 1990.[3] and won the Emmy-Award for Outstanding Performance in a Classical Music or Dance Program in 1990.[4] The award was shared by the films three stars, Boitano, Orser and Witt. The choreography by Sandra Bezic and Michael Seibert (figure skater) was influenced by elements of classical ballet and flamenco as well. During the rehearsals the skaters were also coached by flamenco dancer Cristina Hoyos.