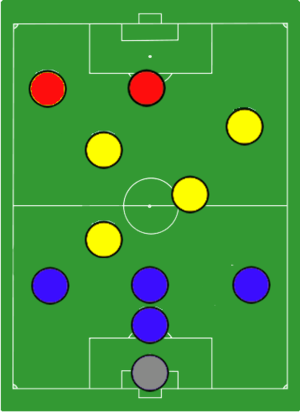 Catenaccio (Italian pronunciation: [kateˈnattʃo]) or The Chain is a tactical system in football with a strong emphasis on defence. In Italian, catenaccio means "door-bolt", which implies a highly organised and effective backline defence focused on nullifying opponents' attacks and preventing goal-scoring opportunities.

The Catenaccio was influenced by the verrou (also "doorbolt/chain" in French) system invented by Austrian coach Karl Rappan.[1] As coach of Switzerland in the 1930s and 1940s, Rappan played a defensive sweeper called the verrouilleur, that was highly defensive and was positioned just ahead of the goalkeeper.[2] In the 1950s, Nereo Rocco's Padova pioneered the system in Italy where it would be used again by the Internazionale team of the early 1960s.[3][4]

Rappan's verrou system, proposed in 1932, when he was coach of Servette, was implemented with four fixed defenders, playing a strict man-to-man marking system, plus a playmaker in the middle of the field who played the ball together with two midfield wings.

Rocco's tactic, often referred to as the real Catenaccio, was shown first in 1947 with Triestina: the most common mode of operation was a 1–3–3–3 formation with a strictly defensive team approach. With catenaccio, Triestina finished the Serie A tournament in a surprising second place. Some variations include 1–4–4–1 and 1–4–3–2 formations.

The key innovation of Catenaccio was the introduction of the role of a libero ("free") defender, also called "sweeper", who was positioned behind a line of three defenders. The sweeper's role was to recover loose balls, nullify the opponent's striker and double-mark when necessary. Another important innovation was the counter-attack, mainly based on long passes from the defence.

In Herrera's version in the 1960s, four man-marking defenders were tightly assigned to each opposing attacker while an extra sweeper would pick up any loose ball that escaped the coverage of the defenders. The emphasis of this system in Italian football spawned the rise of many top Italian defenders who became known for their hard-tackling, ruthless defending. However, despite the defensive connotations, Herrera claimed shortly before his death that the system was more attacking than people remembered, saying 'the problem is that most of the people who copied me copied me wrongly. They forgot to include the attacking principles that my Catenaccio included. I had Picchi as a sweeper, yes, but I also had Facchetti, the first full back to score as many goals as a forward.'

Total Football, invented by Rinus Michels in the 1970s, rendered Herrera's version of Catenaccio rather obsolete in club football. In Total Football, no player is fixed in his nominal role; anyone can assume in the field the duties of an attacker, a midfielder or a defender, depending on the play. Man-marking alone was insufficient to cope with this fluid system. Coaches began to create a new tactical system that mixed man-marking with zonal defense. In 1972, Michels' Ajax defeated Inter 2–0 in the European Cup final and Dutch newspapers announced the "destruction of Catenaccio" at the hands of Total Football. In 1973, Ajax crushed Cesare Maldini's Milan 6–0 for the European Super Cup in a match in which the defensive Milan system was destroyed by Ajax.

Pure Catenaccio is no longer used in the modern football tactics.[citation needed] Two major characteristics of this style – the man-to-man marking and the libero ("free") position – are no longer in use[citation needed]. Highly defensive structures with little attacking intent are often labelled as Catenaccio, but deviates from the original design of the system.[citation needed] Moreover, the sweeper or libero position has virtually disappeared from the modern game since the 1980s because teams favoured deploying the extra man in another area of the pitch.[5]

Catenaccio is often thought to be commonplace in Italian football;[6] but is now used infrequently by Italian Serie A teams, who instead prefer to apply balanced tactics and formations, mostly 4–3–3 or 3–5–2,[7] The Italian national football team with manager Cesare Prandelli also used the 3-5-2 in their first clashes of UEFA Euro 2012 Group C and then switched to the their 'standard' 4–4–2 formation UEFA Euro 2012 final. Italy's previous coaches, Cesare Maldini and Giovanni Trapattoni, used the Catenaccio at international level,[8][9] and both failed to reach the top. Italy, under Maldini, lost on penalties at the 1998 FIFA World Cup quarter-finals, while Trapattoni lost early in the second round at 2002 FIFA World Cup and lost at the UEFA Euro 2004 during the first round.

However, Catenaccio has also had its share of success stories. Trapattoni himself successfully employed it in securing a Portuguese Liga title with Benfica in 2005. German coach Otto Rehhagel also used a similarly defensive approach for his Greece national football team in UEFA Euro 2004, going on to win the tournament despite his team being heavy underdogs.[10] Dino Zoff also put Catenaccio to good use for Italy, securing a place in the UEFA Euro 2000 final, which Italy only lost on the golden goal rule to France. Likewise, Azeglio Vicini led Italy to the 1990 FIFA World Cup semifinal thanks to small wins in six hard-fought defensive games in which Italy produced little but risked even less, totaling only 7 goals for and none against. Italy would then lose a tight semifinal to Argentina, due in no small part to a similar strategy from Carlos Bilardo, who then went on to lose the final to a much more offensive-minded Germany led by Franz Beckenbauer.[citation needed]

Similarly, when Italy was reduced to 10 men in the 50th minute of the 2006 FIFA World Cup 2nd round match against Australia, coach Marcello Lippi changed the Italian's formation to a defensive orientation which caused the British newspaper The Guardian to note that "the timidity of Italy's approach had made it seem that Helenio Herrera, the high priest of Catenaccio, had taken possession of the soul of Marcello Lippi." It should be noted, however, that the ten-man team was playing with a 4–3–2 scheme, just a midfielder away from the regular 4–4–2.[11]