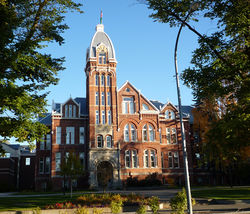 Central Washington University, or CWU, is a publicly assisted university in Ellensburg, Washington in the United States. The university's three chief divisions include the Office of the President, Business and Financial Affairs, and Academic and Student Life (ASL). Within ASL are four colleges: the College of Arts and Humanities, the College of Business (Ellensburg campus and centers in the Puget Sound and central regions),[3] the College of Education and Professional Studies, and College of the Sciences.

CWU is located about 110 miles (180 km) east of Seattle, Washington on Interstate 90 in the Kittitas Valley.

In 1890, the state Legislature established the Washington State Normal School (WSNS) in Ellensburg for “the training and education of teachers in the art of instructing and governing in the public schools of this state.” [4] WSNS originally opened on September 6, 1891, with classes held at the Washington Public School in Ellensburg.[5] In 1893, the school's first building was constructed and named Barge Hall, in honor of the first WSNS principal, Benjamin Franklin Barge. Barge Hall was added to the National Register of Historic Places in 1976.

CWU students, alumni, and varsity athletes are known as the "Wildcats" and their colors are crimson and black.[6] CWU is part of NCAA Division II and is part of the Great Northwest Athletic Conference.[6]

The following are some notable former Wildcats:

x300px
360° panorama of a portion of the Central Washington University campus as seen on an August afternoon. Taken at the southwest corner of campus, buildings, from left to right: Mitchell Hall, current location of most of the school's registrar and general admissions staff; McConnell Hall and auditorium, home of the Theatre Arts department; Barge Hall, financial and administrative center of campus; and Shaw-Smyser Hall, the primary building for the College of Business.