A Century of Progress International Exposition was a World's Fair held in Chicago, as The Chicago World's Fair, from 1933 to 1934 to celebrate the city's centennial. The theme of the fair was technological innovation. The fair's motto was "Science Finds, Industry Applies, Man Adapts"; its architectural symbol was the Sky Ride, a transporter bridge perpendicular to the shore on which one could ride from one side of the fair to the other.

A Century of Progress was organized as an Illinois nonprofit corporation in January 1928 for the purpose of planning and hosting a World's Fair in Chicago in 1934. City officials designated three and a half miles of newly reclaimed land along the shore of Lake Michigan between 12th and 39th streets on the Near South Side for the fairgrounds.[1] Held on a 427 acres (1.73 km2) portion of Burnham Park the Century of Progress opened on May 27, 1933.[2] The fair's opening night began with a nod to the heavens. Lights were automatically activated when the rays of the star Arcturus were detected. The star was chosen as its light had started its journey at about the time of the previous Chicago world's fair—the World's Columbian Exposition—in 1893.[3] The rays were focused on photoelectric cells in a series of astronomical observatories and then transformed into electrical energy which was transmitted to Chicago.[4]

The fair buildings were multi-colored, to create a "Rainbow City" as opposed to the "White City" of the World's Columbian Exposition. The buildings generally followed Moderne architecture in contrast to the neoclassical themes used at the 1893 fair. One famous feature of the fair were the performances of fan dancer Sally Rand. Other popular exhibits were the various auto manufacturers, the Midway (filled with nightclubs such as the Old Morocco, where future stars Judy Garland, The Cook Family Singers, and The Andrews Sisters performed), and a recreation of important scenes from Chicago's history. The fair also contained exhibits that would seem shocking to modern audiences, including offensive portrayals of African-Americans, a "Midget City" complete with "sixty Lilliputians",[5] and an exhibition of incubators containing real babies.[6] 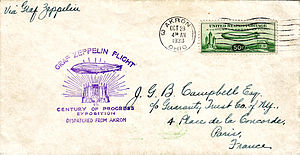 Cover carried on the Graf Zeppelin from 1933 Century of Progress Exposition franked with C-18 US Air Mail stamp issued for the airship's visit.

One of the highlights of the 1933 World's Fair was the arrival of the German airship Graf Zeppelin on October 26, 1933. After circling Lake Michigan near the exposition for two hours, Commander Hugo Eckener landed the 776-foot airship at the nearby Curtiss-Wright Airport in Glenview. It remained on the ground for twenty-five minutes (from 1 to 1:25 pm)[7] then took off ahead of an approaching weather front bound for Akron, Ohio. For some Chicagoans, however, the appearance of the Graf Zeppelin over their fair city was not a welcome sight, as the airship had become a prominent reminder of the ascendancy of Adolf Hitler to power earlier that same year. This triggered dissension in the days following its visit, particularly within the city's large German-American population.[citation needed]

The "dream cars" which American automobile manufacturers exhibited at the fair included Cadillac's introduction of its V-16 limousine; Nash's exhibit had a variation on the vertical (i.e., paternoster) parking garage—all the cars were new Nashes; Lincoln presented its rear-engined "concept car" precursor to the Lincoln-Zephyr, which went on the market in 1936 with a front engine; Pierce-Arrow presented its modernistic Pierce Silver Arrow for which it used the byline "Suddenly it's 1940!" But it was Packard which won the best of show.

File:Pioneer Zephyr Dawn to Dusk Club.jpg
The passengers, including "Zeph" the burro, that rode the Zephyr on the "Dawn-to-Dusk Dash" gather for a group photo in front of the train after arriving in Chicago on May 26, 1934.

One interesting and enduring exhibit was the 1933 Homes of Tomorrow Exhibition that demonstrated modern home convenience and creative practical new building materials and techniques with twelve model homes sponsored by several corporations affiliated with home decor and construction. Marine artist Hilda Goldblatt Gorenstein (Hilgos) painted twelve murals for the Navy's exhibit in the Federal Building for the fair. The frieze was composed of twelve murals depicting the influence of sea power on America, beginning with the settlement of Jamestown, Virginia in 1607 when sea power first reached America and carrying through World War I.[8]

The first Major League Baseball All-Star Game was held at Comiskey Park (home of the Chicago White Sox) in conjunction with the fair. 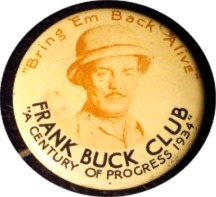 In May 1934, the Union Pacific Railroad exhibited its first streamlined train, the M-10000, and the Burlington Route its famous Zephyr which, on May 26, made a record-breaking dawn-to-dusk run from Denver, Colorado, to Chicago in 13 hours and 5 minutes. To cap its record-breaking speed run, the Zephyr arrived dramatically on-stage at the fair's "Wings of a Century" transportation pageant.[citation needed] The two trains launched an era of industrial streamlining.[citation needed] Both trains later went into successful revenue service, the Union Pacific's as the City of Salina, and the Burlington Zephyr as the first Pioneer Zephyr.[citation needed] The Zephyr is now on exhibit at Chicago's Museum of Science and Industry.[citation needed]

Frank Buck furnished a wild animal exhibit, Frank Buck’s Jungle Camp. Over two million people visited Buck’s reproduction of the camp he and his native assistants lived in while collecting animals in Asia. After the fair closed, Buck moved the camp to a compound he had created at Amityville, New York.[9]

Panoramic view of the 1933 Century of Progress World's Fair

Planning for the design of the Exposition began over five years prior to Opening Day.[10] According to an official resolution, decisions regarding the site layout and the architectural style of the exposition were relegated to an architectural commission, which was led by Paul Cret and Raymond Hood.[11] Local architects on the committee included Edward Bennett, John Holabird, and Hubert Burnham. Frank Lloyd Wright was specifically left off the commission due to his inability to work well with others, but did go on to produce three conceptual schemes for the fair.[12][13] Members of this committee ended up designing most of the large, thematic exhibition pavilions.[14]

From the beginning, the commission members shared a belief that the buildings should not reinterpret past architectural forms – as had been done at earlier fairs, such as Chicago's 1893 World's Columbian Exposition—but should instead reflect new, modern ideas, as well as suggest future architectural developments.[15] Because the fairgrounds was on new man-made land that was owned by the state and not the city, the land was initially free from Chicago's strict building codes, which allowed the architects to explore new materials and building techniques.[16] This allowed the design and construction of a wide array of experimental buildings, that eventually included large general exhibition halls, such as the Hall of Science (Paul Cret) and the U.S. Federal Building (Bennet, Burnham and Holabird); corporate pavilions, including the General Motors Building (Albert Kahn) and the Sears Pavilion (Nimmons, Carr, and Wright); futuristic model houses, most popular was the twelve-sided House of Tomorrow (George Frederick Keck); as well as progressive foreign pavilions,including the Italian Pavilion (Mario de Renzi and Adalberto Libera); and historic and ethnic entertainment venues, such as the Belgian Village (Burnham Brothers with Alfons deRydt) and the Streets of Paris (Andrew Rebori and John W. Root) where fan dancer Sally Rand performed.[17] These buildings were constructed out of five-ply Douglas fir plywood, ribbed-metal siding, and prefabricated, boards, such as Masonite, Sheetrock, Maizewood, as well as other new man-made materials.[18] Structural advances also filled the fairgrounds. These included the earliest catenary roof constructed in the United States, which roofed the dome of the Travel and Transport Building (Bennet, Burnham and Holabird) and the first thin shell concrete roof in the United States, on the small, multi-vaulted Brook Hill Farm Dairy built for the 1934 season of the fair.[19]

Originally, the fair was scheduled only to run until November 12, 1933, but it was so successful that it was opened again to run from May 26 to October 31, 1934.[20] The fair was financed through the sale of memberships, which allowed purchases of a certain number of admissions once the park was open. More than $800,000 was raised in this manner as the country came out of the Great Depression. A $10 million bond was issued on October 28, 1929, the day before the stock market crashed. By the time the fair closed in 1933, half of these notes had been retired, with the entire debt paid by the time the fair closed in 1934. For the first time in American history, an international fair had paid for itself. In its two years, it had attracted 48,769,227 visitors. According to James Truslow Adams's Dictionary of American History, during the 170 days beginning May 27, 1933, there were 22,565,859 paid admissions; during the 163 days beginning May 26, 1934, there were 16,486,377; a total of 39,052,236.[citation needed]

Much of the fair site is now home to Northerly Island park (since the closing of Meigs Field) and McCormick Place. A column from the ruins of a Roman temple in Ostia given to Chicago by the Italian government to honor General Italo Balbo's 1933 trans-Atlantic flight still stands near Soldier Field. The city added a red star to its flag in 1933 to commemorate the Century of Progress Exposition (it was the fourth of the four stars currently on the flag).[21] In conjunction with the fair, Chicago's Italian-American community raised funds and donated the statue of the Genoese navigator and explorer, Christopher Columbus (Grant Park).[22] It was placed at the south end of Grant Park, near the site of the fair, and is located east of S. Columbus Drive and north of E. Roosevelt Road.

The Polish Museum of America possesses the painting of "Pulaski at Savannah" by Stanisław Kaczor-Batowski, which was exhibited at the Century of Progress fair and where it won first place. After the close of the fair, the painting went on display at The Art Institute of Chicago where it was unveiled by Eleanor Roosevelt on July 10, 1934. The painting was on display at the Art Institute until its purchase by the Polish Women's Alliance on the museum's behalf.[23]

The U.S. Post Office Department issued a special fifty-cent Air Mail postage stamp, (Scott catalogue number C-18) to commemorate the visit of the German airship depicting (l to r) the Chicago Federal Building, the Graf Zeppelin in flight, and its home hangar in Friedrichshafen, Germany. This stamp is informally known as the Baby Zep to distinguish it from the much more valuable 1930 Graf Zeppelin stamps (C13–15). Separate from this issue, for the Fair the Post Office also printed 1 and 3 cent commemorative postage stamps, showing respectively Fort Dearborn and the modernistic Chicago Federal Building. These were also printed in separate souvenir sheets as blocks of 25 (catalog listings 728–31). In 1935 the sheets were reprinted (Scott 766-67).

In October 2010, the National Building Museum in Washington, D.C. opened an exhibition titled Designing Tomorrow: America’s World’s Fairs of the 1930s.[24] This exhibition, which was available for view until September 2011, prominently featured the Century of Progress fair in Chicago.

The major archive for the Century of Progress International Exposition, including the official records from the event and the papers of Lenox Lohr, general manager of the fair, are housed in Special Collections at the University of Illinois, Chicago. A collection of materials including images is held by the Ryerson & Burnham Libraries at the Art Institute of Chicago. The Century of Progress Collection includes photographs, guidebooks, brochures, maps, architectural drawings, and souvenir items. Specific collections with material include the Chicago Architects Oral History Project; the Daniel H. Burnham Jr. and Hubert Burnham Papers; Edward H. Bennett Collection; Voorhees, Gmelin, and Walker photographs.