From Infogalactic: the planetary knowledge core
(Redirected from Charles A. Lindbergh, Sr)
Jump to: navigation, search

This article is about the politician from Minnesota. For his son, the aviator, see Charles Lindbergh.

Charles August Lindbergh (born Carl Månsson; January 20, 1859 – May 24, 1924) was a United States Congressman from Minnesota's 6th congressional district from 1907 to 1917. He opposed American entry into World War I as well as the 1913 Federal Reserve Act. Lindbergh is best known as the father of famous aviator Charles Lindbergh. 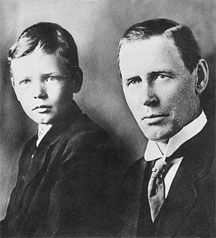 Lindbergh with his son Charles c. 1910

Lindbergh was born Carl Månsson, in Stockholm, Sweden, to Lovisa Carlén, the 19-year-old mistress of Ola Månsson, a peasant member of the Riksdag of the Estates and a bank manager. When accused of bribery and embezzlement, Ola Månsson changed his name to August Lindbergh, left his wife and seven children, and emigrated to the United States with his mistress and their illegitimate infant son, Carl, in 1859. Lovisa became Louisa and young Carl became Charles August Lindbergh.

They settled in Melrose, Minnesota, and had six more children. August worked as a farmer and a blacksmith for 26 years before marrying Louisa in 1885; he had become a widower in 1864 with the death of his first wife in Sweden.[1][2]

Charles August Lindbergh studied law at the University of Michigan Law School, graduating in 1883 and being admitted to the bar the same year. In 1887, Lindbergh married Mary LaFond, with whom he had two daughters, Lillian and Eva. Mary LaFond died in 1898.

In 1901, Charles married Evangeline Lodge Land (1876–1954). They separated in 1918, their only child being the famous aviator Charles Lindbergh, who also became an antiwar leader.[2]

Lindbergh served as prosecuting attorney for Morrison County, Minnesota in 1891-1893. He was elected to the U.S. House of Representatives in 1906 as a Republican, serving in the 60th, 61st, 62nd, 63rd, and 64th congresses. In 1916 he unsuccessfully campaigned for a seat in the United States Senate. At the time of his death, Lindbergh was a candidate for governor on the Minnesota Farmer-Labor Party ticket, and would have been the first Minnesota governor from the party if he had been elected.

In 1913 he published Banking, Currency, and the Money Trust.[3] By 1917, third year of the Great War, Lindbergh's son was age 16, which meant some possibility of conscription. He wrote a polite, anti-war polemic entitled "Why is Your Country at War?". Hot off the press, a copy was rushed to President Woodrow Wilson. After examination, Wilson ordered the confiscation of all possible copies. Agents carrying out this order found pallets of the lead plates for printing, which were melted in a refiner's fire. This insult to the Lindbergh family is one basis for the original opposition of his son to U.S. participation in World War II. Eustace Mullins documents that plates of this book were confiscated and destroyed.[4]

Also in 1917 Lindbergh brought articles of impeachment against members of the Federal Reserve Board including Paul Warburg and William Proctor Gould Harding, charging that they were involved "...in a conspiracy to violate the Constitution and laws of the United States..."[5]

Charles August Lindbergh died in 1924 in Crookston, Minnesota of brain cancer. He has a memorial plaque in the columbarium at Lakewood Cemetery in Minneapolis. According to his wishes, son Charles scattered his ashes over the place near Sauk River where the first Lindbergh home once stood.[6]