From Infogalactic: the planetary knowledge core
Jump to: navigation, search
This article is about the Governor of New Mexico. For the composer of chess endgame studies, see Charles Bent (chess composer).

Bent had been working as a fur trader in the region since 1828, with his younger brother William and later partner Ceran St. Vrain. Though his office was in Santa Fe, Bent maintained his residence and a store in Taos. On January 19, 1847, he was scalped and killed by Pueblo attackers during the Taos Revolt.

Bent was born in Charleston, West Virginia (then Virginia), the oldest child of Silas Bent and his wife.[1]

After leaving the army, in 1828 Charles and his younger brother William took a wagon train of goods from St. Louis to Santa Fe. There they established mercantile contacts and began a series of trading trips back and forth over the Santa Fe Trail. In 1832, he formed a partnership with Ceran St. Vrain, another trader from St. Louis, called Bent & St. Vrain Company. In addition to its store in Taos, New Mexico, the trading company established a series of "forts" (fortified trading posts) to facilitate trade with the Plains Indians, including Fort Saint Vrain on the South Platte River and Bent's Fort on the Arkansas River, both in Colorado; and Fort Adobe on the Canadian River.[2] Bent's Fort, outside La Junta, Colorado, has been restored and is now a National Historic Site.

Many inhabitants of New Mexico were not satisfied with the American rule. Some mourned for the old connection with Mexico, others feared the loss of their private goods, and others hated Charles Bent because of his attitude towards Mexicans. In December 1846, the influential families in the country were planning a revolt against the new rule. The governor and Colonel Price revealed these conspiracy in advance. Some leaders were arrested, but two important leaders of the movement were able to escape.

It seemed as if the rebellion was put down and the governor issued a proclamation, which some citizens thought was written in an arrogant and overbearing tone. In January 1847, While serving as territorial governor, Charles Bent traveled to his home town of Taos without military protection. There he was scalped alive and murdered in his home by a group of pueblo Native American attackers under the orders of Mexican conspirators who started the Taos Revolt. He is buried in the National Cemetery in Santa Fe.[4]

The women and children in the Bent home were not harmed by the insurgents, and the remaining Bents fled to safety next door through a hole in the parlor wall.

In the following months, Colonel Price was able to reassure the country. Most rebels were caught and some of them executed. The uprising was finally crushed in July 1847.[5][6][7]

Bent and the renowned frontier scout Christopher "Kit" Carson had married sisters. Maria Ignacia Bent[8] outlived her husband by 36 years; she died on April 13, 1883. The Bents had a daughter, Teresina Bent. Charles and Maria Bent and the Carsons are interred at Kit Carson Cemetery in Taos.[9] 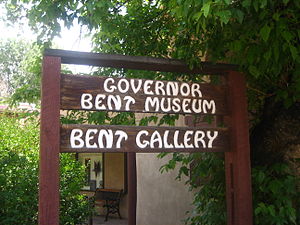 Bent Street, which runs in front of what had been his home in Taos, and Martyr's Lane, which runs behind it, are named for him.

The Governor Charles Bent House is now a museum. An elementary school in northeast Albuquerque is named in Bent's honor.

Bent documented the indigenous peoples of New Mexico in an essay which was published posthumously in Henry Schoolcraft's study of American Indians: