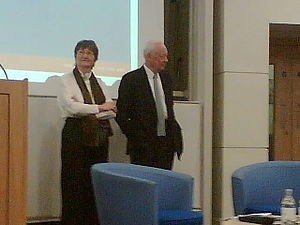 Charles Handy (born 1932) is an Irish author/philosopher specialising in organisational behaviour and management. Among the ideas he has advanced are the "portfolio worker" and the "Shamrock Organization" (in which professional core workers, freelance workers and part-time/temporary routine workers each form one leaf of the "Shamrock").

He has been rated among the Thinkers 50, a private list of the most influential living management thinkers. In 2001 he was second on this list, behind Peter Drucker, and in 2005 he was tenth. When the Harvard Business Review had a special issue to mark their 50th Anniversary they asked Handy, Peter Drucker and Henry Mintzberg to write special articles.

In July 2006 he was conferred with an honorary Doctor of Laws by Trinity College, Dublin.

Born the son of a Church of Ireland archdeacon in Clane, Co. Kildare, Ireland, Handy was educated as a boarder at Bromsgrove School and Oriel College, Oxford.

Handy's business career started in marketing at Shell International. He left Shell to teach at the London Business School in 1972.

He has Honorary Doctorates from Bristol Polytechnic (now the University of the West of England), UEA, Essex, Durham, Queen's University Belfast and the University of Dublin. He is an Honorary Fellow of St Mary's College, Twickenham, the Institute of Education City and Guilds and Oriel College, Oxford. He was awarded a CBE in 2000.

A feel for Handy's style (and an appreciation of its occasional grammatical failings) can be gained from the opening of his autobiography: "Some years ago I was helping my wife arrange an exhibit of her photographs of Indian tea gardens when I was approached by a man who had been looking at the pictures. 'I hear that Charles Handy is here,' he said. 'Indeed he is,' I replied, 'and I am he.' He looked at me rather dubiously for a moment, and then said, 'Are you sure?' It was, I told him, a good question because over time there had been many versions of Charles Handy, not all of which I was particularly proud."[2]

He is the author of the following books:

He is married to Elizabeth Handy, a photographer, with whom he has collaborated on a number of books including The New Alchemists and A Journey through Tea. Their son Scott Handy is an actor who has performed with the RSC.