Charles Pierre Péguy (French: [ʃaʁl peɡi]; 7 January 1873 – 5 September 1914) was a noted French poet, essayist, and editor. His two main philosophies were socialism and nationalism, but by 1908 at the latest, after years of uneasy agnosticism, he had become a believing but non-practicing Roman Catholic.[1][2][3] From that time, Catholicism strongly influenced his works.

Péguy was born to poverty in Orléans.[4] His mother Cécile, widowed when he was an infant, mended chairs for a living. His father Désiré Péguy was a cabinet maker, who died in 1874 as a result of combat wounds. Péguy studied at the Lycée Lakanal in Sceaux, winning a scholarship at the École normale supérieure (Paris), where he attended notably the lectures of Henri Bergson and Romain Rolland, whom he befriended. He formally left without graduating, in 1897, though he continued attending some lectures in 1898. Influenced by Lucien Herr, librarian of the École Normale Supérieure, he became an ardent Dreyfusard.

In 1897, Péguy married Charlotte-Françoise Baudoin; they had one daughter and three sons, one of whom was born after Péguy's death. Around 1910 he fell deeply in love with Blanche Raphael, a young Jewish friend; however, he was faithful to his wife.

From his earliest years, he was influenced by socialism. He joined the Socialist Party in 1895. From 1900 until his death in 1914, he was the main contributor to and the editor of the literary magazine Les Cahiers de la Quinzaine, which at first supported the Socialist Party director Jean Jaurès. However, Péguy ultimately ended this support after he began viewing Jaurès as a traitor to the nation and to socialism. In the Cahiers, Péguy published not only his own essays and poetry, but also works by important contemporary authors such as Romain Rolland.

His free-verse poem, "Portico of the Mystery of the Second Virtue", has gone through more than 60 editions in France. It was a favorite book of Charles de Gaulle. 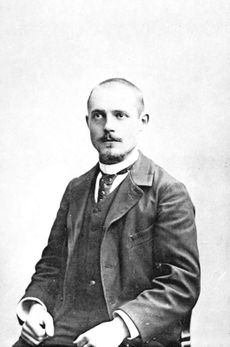 When the Great War broke out, Péguy became a lieutenant in the 19th company of the French 276th Infantry Regiment. He died in battle, shot in the forehead, near Villeroy, Seine-et-Marne on the day before the beginning of the Battle of the Marne.[5] There is a memorial to Péguy near the field where he was killed. 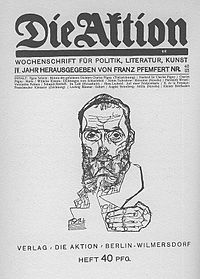 Cover of Die Aktion with Péguy's portrait by Egon Schiele

Benito Mussolini referred to Péguy as a "source" for Fascism; Péguy would have likely been horrified by this appropriation.[6][7] During the Second World War both supporters and opponents of Vichy France cited Péguy. Edmond Michelet was the first of many members of the French Resistance to quote Péguy; de Gaulle, familiar with Péguy's writing, quoted him a 1942 speech. Those who opposed Vichy's anti-Semitism laws often cited him. By contrast, Robert Brasillach praised Péguy as a "French National Socialist", and Péguy's sons Pierre and Marcel wrote that their father was an inspiration for Vichy's National Revolution ideology and "above all, a racist".[8]

The English novelist Graham Greene alluded to Péguy in Brighton Rock, while The Heart of the Matter has as its epigraph a quotation from Péguy.[9] In The Lawless Roads Greene refers to Péguy "challenging God in the cause of the damned".[10]

The Swiss theologian Hans Urs von Balthasar, in the course of describing the history of art as an ongoing, sometimes more and sometimes less successful approximation of God's creativeness, noted that Peguy's Eve was a "theological redemption of the project of Proust", meaning that where Proust was gifted with memory and charity, the Eve of Peguy – not necessarily Peguy himself – was gifted with memory, charity, and direct knowledge of the redemption of God.[11] 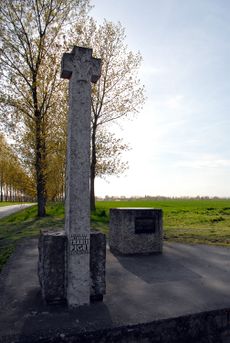 Geoffrey Hill published a poem in 1983 as a homage to Péguy, entitled The Mystery of the Charity of Charles Péguy.[12]

"It will never be known what acts of cowardice have been committed for fear of not looking sufficiently progressive." (Notre Patrie, 1905)

"Kantian ethics has clean hands but, in a manner of speaking, actually no hands."[15]

"How maddening, says God, it will be when there are no longer any Frenchmen."[16]

"There will be things that I do that no one will be left to understand." (Le Mystère des saints Innocents)

"Everything begins in mysticism and ends in politics." (Notre Jeunesse, 1909)