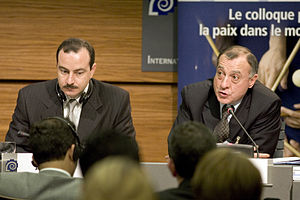 Charles Saint-Prot (on the right).

Charles Saint-Prot is a French geopolitician and writer. He is a historian specializing in international relations and geopolitics, in particular, questions of the Middle East and the Islamic world. Saint-Prot is the director of the Observatoire d’études géopolitiques (Observatory of geopolitical studies) in Paris, a research center on the international relations, and is the director, with Zeina el Tibi, of the publication Etudes géopolitiques [1]

The Observatory of Geopolitical Studies (OEG) is a French institute, which has the aim of contributing to the promotion of scientific research in the various fields of geopolitics. A Council of orientation gathers a team of academics, researchers, specialists and diplomats. The Observatory of geopolitical studies has its seat in Paris, an office in Beirut and correspondents in many countries.

He has about 30 publications to his credit, some of which have been translated into English and Arabic.

A specialist of Islam

The main subject of this book is Islam and the challenge of the future between revolutionary sectarianism and westernization. Nowadays Islam has become a main concern to the world. Words as “Islamism”, “radical Islam”, “salafism”, “wahhabism”, are often used without a clear meaning and content. Saint-Prot explains how orthodox Sunni Islam succeeds in bringing together the largest number of the Muslims with a creed, legal principles and rules which were defined by the traditionalist current. Tradition never rejected reformism and cannot be compared with rigid conservatism or with minority, but active, trends defined by their radical revolutionary sectarianism. Far from encouraging the radicalism whose most spectacular consequence is terrorism, the Tradition is the voice of Islam which tries to reconcile faith and respect of the immutable dogma and nowadays evolutions by the way of ijtihad (effort at reasoning to find a solution to a legal question)

Saint-Prot develops a new analysis of great traditionalists as Ahmed Ibn Hanbal or Ibn Taymiyyah, and having as a main reference the works of the pre-reformist Mohammed Abdul Wahhab. The thesis studies the developments and evolution of the traditionist doctrines, especially from a socio-political and legal point of view, since the first centuries of Islam up to now, taking into account the important reformist trend with thinkers as Al Afghani, Mohammed Abdu, Rashid Rida or Abdul Rahman Al Kawakibi.

This book demonstrates that the Islamic Tradition is a better answer to the sectarian extremists drifts than a westernization which would lead to the denial and loss of the Muslim identity, which is distinguished by a symbiosis between the temporal and the spiritual