From Infogalactic: the planetary knowledge core
Jump to: navigation, search
For the athlete, see Chilon of Patras. 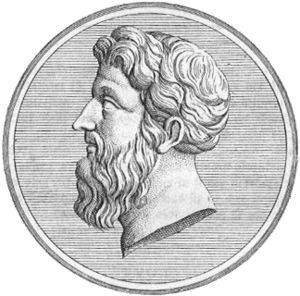 Chilon was the son of Damagetus, and lived towards the beginning of the 6th century BC. Herodotus[1] speaks of him as contemporary with Hippocrates, the father of Peisistratus, and Diogenes Laertius states that he was an old man in the 52nd Olympiad (572 BC), and that he was elected an ephor (overseer) in Sparta in the 56th Olympiad (556/5 BC). Alcidamas stated that he was a member of the Spartan assembly.[2] Diogenes Laertius even goes so far as to claim that Chilon was also the first person who introduced the custom of joining the ephors to the kings as their counselors.[3]

Chilon is said to have helped to overthrow the tyranny at Sicyon, which became a Spartan ally. He is also credited with the change in Spartan policy leading to the development of the Peloponnesian League in the sixth century BC.[4] Another legend claims that he died of joy when his son gained the prize for boxing at the Olympic games, and that his funeral was attended by all the Greeks assembled at the festival.[3]

One of his descendants married king Anaxandridas II of Sparta and bore his son, king Cleomenes I.

Diogenes Laertius describes him as a writer of elegiac poems, and attributes many sayings to him:[3]