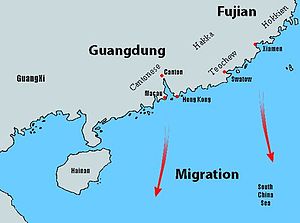 Waves of Chinese emigration (also known as the Chinese diaspora) have happened throughout history. The mass emigration known as the Chinese diaspora, which occurred from the 19th century to 1949, was mainly caused by wars and starvation in mainland China, invasion from various foreign countries, as well as the problems resulting from political corruption. Most immigrants were illiterate peasants and manual labourers, called "coolies" (Chinese: 苦力; pinyin: kǔ lì; literally: "Hard Labour") by analogy to the same pattern of immigration from India, who emigrated to work in countries such as the Americas, Australia, South Africa, and Southeast Asia.

According to Lynn Pan's book Sons of the Yellow Emperor, the Chinese coolie emigration began after slavery was abolished throughout the British possessions. Facing a desperate shortage of manpower, European merchants looked to replace African slaves with indentured labourers from China and India. A British Guiana planter found what he was looking for in the Chinese labourers: "their strong physique, their eagerness to make money, their history of toil from infancy".

Labour recruiters sold the services of large numbers of unskilled Chinese in the coolie trade to planters in colonies overseas in exchange for money to feed their families; this type of trading was known as Mai Zhu Zai (simplified Chinese: 卖猪仔; traditional Chinese: 賣豬仔; pinyin: mài zhū zǎi; literally: "Selling Piglets") to the Chinese. The labourers' lives were very harsh. Some labor recruiters promised good pay and good working conditions to get men signed onto three-year labor contracts. It was recorded on one pepper estate, fifty coolies hired, only two survived in half a year.[citation needed] Most coolies were treated badly, and many died en route to South America and South Africa because of bad transport conditions. Usually, they were cheated of their wages and were unable to return to China after their contracts expired.[citation needed]

Through most of China's history, strict controls prevented large numbers of people from leaving the country. In modern times, however, some have been allowed to leave for various reasons. For example, in the early 1960s, about 100,000 people were allowed to enter Hong Kong. In the late 1970s, vigilance against illegal migration to Hong Kong was again relaxed. Perhaps as many as 200,000 reached Hong Kong in 1979, but in 1980 authorities on both sides resumed concerted efforts to reduce the flow.

More liberalized emigration policies enacted in the 1980s facilitated the legal departure of increasing numbers of Chinese who joined their overseas Chinese relatives and friends. The Four Modernizations program, which required Chinese students and scholars, particularly scientists, to be able to attend foreign education and research institutions, brought about increased contact with the outside world, particularly the industrialized nations. Thus, as China moved toward the 21st century, the diverse resources and immense population that it had committed to a comprehensive process of modernization became ever more important.

In 1983, emigration restrictions were eased as a result in part of the economic open-door policy. In 1984, more than 11,500 business visas were issued to Chinese citizens, and in 1985, approximately 15,000 Chinese scholars and students were in the United States alone. Any student who had the economic resources could apply for permission to study abroad. United States consular offices issued more than 12,500 immigrant visas in 1984, and there were 60,000 Chinese with approved visa petitions in the immigration queue.

Export of labor to foreign countries also increased. The Soviet Union, Iraq, and the Federal Republic of Germany requested 500,000 workers, and as of 1986, China sent 50,000. The signing of the United States-China Consular Convention in 1983 demonstrated the commitment to more liberal emigration policies. Both sides agreed to permit travel for the purpose of family reunification and to facilitate travel for individuals who claim both Chinese and United States citizenship. However, emigrating from China remained a complicated and lengthy process mainly because many countries were unwilling or unable to accept the large numbers of people who wished to emigrate. Other difficulties included bureaucratic delays and, in some cases, a reluctance on the part of Chinese authorities to issue passports and exit permits to individuals making notable contributions to the modernization effort.

There has additionally been a consequential component of Chinese emigration of illegal origin, most notably Fuzhou people from Fujian Province and Wenzhounese from Zhejiang Province in Mainland China, specifically destined for New York City[28] in the United States, beginning in the 1980s. Quantification of the magnitude of this modality of emigration is imprecise and varies over time, but it appears to continue unabated on a significant basis.

A much smaller wave of Chinese immigration to Malaysia came after the 1990s, holding the citizenship of the People's Republic of China and mostly Mandarin-speaking Chinese from northern China.

The only significant immigration to China has been by the overseas Chinese, who in the years since 1949 have been offered various enticements to repatriate to their homeland. Several million may have done so since 1949. The largest influx came in 1978–79, when about 160,000 to 250,000 ethnic Chinese refugees fled Vietnam for southern China, as relations between the two countries worsened. Many of these refugees were reportedly settled in state farms on Hainan Island in the South China Sea.

This article incorporates public domain material from websites or documents of the Library of Congress Country Studies. [1]

Lua error in Module:World_topic at line 262: too many expensive function calls.