Chinese salvationist religions or Chinese folk religious sects are a Chinese religious tradition characterised by a concern for salvation (moral fulfillment) of the person and the society.[1] They are distinguished by egalitarianism, a founding charismatic person often informed by a divine revelation, a specific theology written in holy texts, a millenarian eschatology and a voluntary path of salvation, an embodied experience of the numinous through healing and self-cultivation, and an expansive orientation through evangelism and philanthropy.[2]

Some scholars consider these religions a single phenomenon, and other consider them the fourth great Chinese religious category alongside the well-established Confucianism, Buddhism and Taoism.[3] Generally these religions focus on the worship of the universal God, either represented as male, female or genderless, and regard their holy patriarchs as embodiments of God.

They are distinct from the common indigenous religion of the Han Chinese consisting in the worship of gods and ancestors,[8] although in English language persists a terminological confusion between the two. The 20th century expression of the folk religious sects has been studied under the definition of "redemptive societies" (救世团体 jiùshì tuántǐ), a term coined by Prasenjit Duara.[9]

A collective name that has been in use possibly since the late Qing dynasty is huìdàomén (会道门 "churches, ways and gates"), as their names interchangeably use the terms huì (会 "church", "society", "association", "congregation"; when referring to their corporate form), dào (道 "way") or mén (门 "gate[way]", "door").

The Vietnamese religions of Minh Đạo and Caodaism emerged from the same tradition of the Chinese folk religious sects.[11]

A category overlapping with that of the sects of salvation is that of the "secret societies" (秘密社会 mìmì shèhuì, or 秘密结社 mìmì jiéshè),[12] religious communities of initiatory and secretive character, including rural militias and fraternal organisations which became very popular in the early republican period, and often labeled as "heretical doctrines" (宗教异端 zōngjiào yìduān).[13] Recent scholarship has created the label of "secret sects" (秘密教门 mìmì jiàomén) to distinguish the peasant "secret societies" with a positive dimension of the Yuan, Ming and Qing periods, from the negatively viewed "secret societies" of the early republic that became instruments of anti-revolutionary forces (the Guomindang or Japan).[14]

Many of these religions are traced to the White Lotus tradition[15] ("Chinese Maternism", as mentioned by Philip Clart[16]) that was already active in the Song dynasty;[17] others claim a Taoist legacy and are based on the recovery of ancient scriptures attributed to important immortals such as Lü Dongbin and Zhang Sanfeng, and have contributed to the popularisation of neidan;[18] other ones are distinctively Confucian and advocate the realisation of a "great commonweath" (datong 大同) on a world scale, as dreamt of in the Book of Rites.[19] Some scholars even find influences from Manichaeism, Mohism and shamanic traditions.[20][21]

In the Ming and Qing dynasties many folk religious sects were outlawed by the imperial authorities as "evil religions" (邪教 xiéjiào).[22] With the collapse of the Qing state in 1911 the sects enjoyed an unprecedented period of freedom and thrived, and many of them were officially recognised as religious groups by the early republican government.[23]

The founding of the People's Republic in 1949 saw them suppressed once again,[24] although since the 1990s and 2000s the climate was relaxed and some of them have received some form of official recognition.[25] In Taiwan all the still existing restrictions were rescinded in the 1980s.

Folk religious sects began to rapidly revive in mainland China in the 1980s, and now if conceptualised as a single group they are said to have the same number of followers of the five state-sanctioned religions of China taken together.[26] Scholars and government officials have been discussing to systematise and unify this large base of religious organisations; in 2004 the State Administration of Religious Affairs created a department for the management of folk religions.[26] In the late 2015 a step was made at least for those of them with a Confucian identity, with the foundation of the Holy Confucian Church of China which aims to unite in a single body all Confucian religious groups.

Many of the redemptive religions of the 20th and 21st century aspire to become the repository of the entirety of the Chinese tradition in the face of Western modernism and materialism,[27] advocating an "Eastern solution to the problems of the modern world",[28] or even interacting with the modern discourse of an Asian-centered universal civilisation.[28] 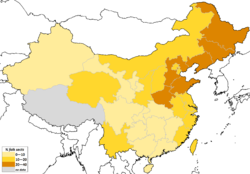 The Chinese folk religious sects are mostly concentrated in northern and northeastern China, although with a significant influence reaching the Yangtze River Delta since the 16th century.[29] The northern provinces have been a fertile ground for the sect tradition because of a number of reasons: ① firstly, popular religious movements were active in the region already in the Han dynasty, and they deeply penetrated local society; ② secondly, northern provinces are characterised by social mobility around the capital and weak traditional social structure, thus folk religious sects fulfill the demand of individual searching for new forms of community and social network.[30]

According to the Chinese General Social Survey of 2012, approximately 2.2% of the population of China, which is around 30 million people, claim to be members of folk religious sects.[31] The actual number of followers may be higher, about the same as the number of members of the five state-sanctioned religions of China if counted together.[26] In Taiwan, recognised folk religious sects gather approximately 10% of the population as of the mid-2000s.