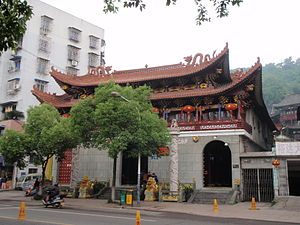 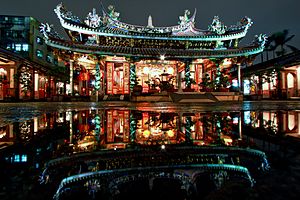 Night view of the Dalongdong Baoan Temple in Taipei, Taiwan.

A Chinese temple is a worship place of the Chinese folk religion/Shenism, where people revere ethnic Chinese gods and ancestors. They can be distinguished into:

These temples are different from:

Gōng (宫), meaning "palace" is a term used for a templar complex of multiple buildings, while yuàn (院) is a generic term meaning "sanctuary" or "shrine".

Shen temples are distinct from Taoist temples in that they are established and administered by local managers, village communities, lineage congregations and worship associations, and don't have professional priests, although Taoist daoshi, fashi, Confucian lisheng, and also wu and tongji shamans, may perform services within these temples. Shenist temples are usually small and decorated with traditional figures on their roofs (dragons and deities), although some evolve into significant structures.

Chinese temples can be found throughout Mainland China, Taiwan and also where Chinese expatriate communities settled over centuries. An old name in English for Chinese traditional temples is "joss house". "Joss" is a corrupted version of the Portuguese word for "god", deus. "Joss house" was in common use in English in western North America during frontier times, when joss houses were a common feature of Chinatowns. The name "joss house" describes the environment of worship. Joss sticks, a kind of incense, are burned inside and outside of the house.