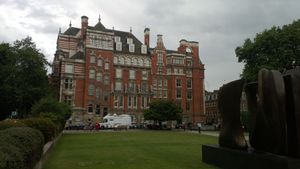 The Church Commissioners is a body managing the historic property assets of the Church of England. It was set up in 1948 combining the assets of Queen Anne's Bounty, a fund dating from 1704 for the relief of poor clergy, and of the Ecclesiastical Commissioners formed in 1836.

The value of the Commissioners' assets was around £5.5 billion as at the end of 2012.[1] Most of the income is used to pay clergy pensions.

The Church Commissioners are now based at Church House, Westminster, London, having long occupied No. 1 Millbank.[2] However, the Millbank building was sold in 2005 to the House of Lords for accommodation of members and staff; the Commissioners completed the move to Church House in 2007.[3] They used to be an exempt charity under English law.[4]

The Secretary (i.e. chief executive) of the Church Commissioners is Andrew Brown