From Infogalactic: the planetary knowledge core
Jump to: navigation, search
For other uses, see Cist (disambiguation). 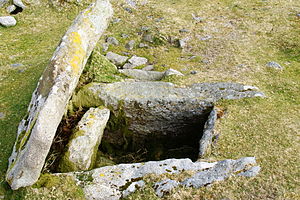 Kistvaen on the southern edge of Dartmoor in Drizzlecombe (England) showing the capstone and the inner cist structure. 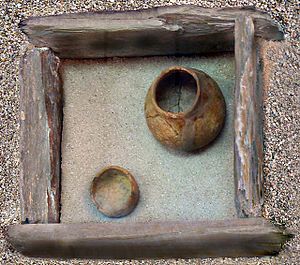 A cist (/ˈsɪst/ or /ˈkɪst/; also kist /ˈkɪst/;[1][2] from Greek: κίστη or Germanic Kiste) is a small stone-built coffin-like box or ossuary used to hold the bodies of the dead. Examples can be found across Europe and in the Middle East.[3][4][5][6] A cist may have been associated with other monuments, perhaps under a cairn or long barrow. Several cists are sometimes found close together within the same cairn or barrow. Often ornaments have been found within an excavated cist, indicating the wealth or prominence of the interred individual.

In Devonshire a local word for a cist in Modern Cornish is kistvaen. There are numerous Dartmoor kistvaens.

In the Welsh language (whose origins, like Cornish, are from the ancient British or Brythonic language line), cist is also used for such ancient graves, but in modern use, can also mean a chest, a coffer, a box,[7] or even the boot / trunk of a car.[8]