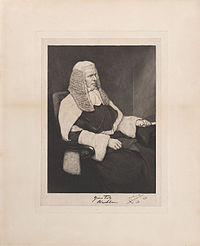 Colin Blackburn, Baron Blackburn (1813 – 8 January 1896) was a Scottish judge who sat in the English courts, became a Law Lord and is remembered as one of the greatest exponents of the common law.

He was the second son of John Blackburn of Killearn, Stirlingshire, and Rebecca, daughter of the Rev. Colin Gillies. He was born on 18 May 1813. His elder brother, Peter Blackburn, represented Stirlingshire in the conservative interest in the parliament of 1859-65. His younger brother was the mathematician Hugh Blackburn. [1] The future judge was educated at Eton and Trinity College, Cambridge, in which university he graduated B.A. (eighth wrangler) in 1835, and proceeded M.A. in 1838.[2] In 1870, he received the honorary degree of LL.D. from the university of Edinburgh. Admitted on 20 April 1835, student at Lincoln's Inn, he migrated thence to the Inner Temple, where he was called to the bar on 23 November 1838, and elected honorary bencher on 13 April 1877. [1]

For some years after his call he went the northern circuit in a briefless or almost briefless condition. He had no professional connection, no turn for politics, no political interest, none of the advantages of person and address which make for success in advocacy, and though his well-earned repute as a legal author led to his occasional employment in heavy mercantile cases, he was still a stuff gownsman, and better known in the courts as a reporter than as a pleader, when on the transference of Sir William Erie from the queen's bench to the chief-justiceship of the common pleas, Lord Campbell startled the profession by selecting him for the vacant puisne judgeship. He was appointed justice on 27 June 1859, and on 2 November following, was invested with the coif. He was knighted on 24 April 1860.[3] The surprise with which his advancement was received was proved by the event to have been singularly ill-founded. [1]

It was soon apparent that the new puisne possessed in an eminent degree all the essential qualities of the judicial mind. To a logical faculty, naturally acute and improved by severe discipline, he added a depth of learning, a breadth of view, a sobriety of judgment, and an inexhaustible patience, which made his decisions as nearly as possible infallible. Few causes célèbres came before him during his seventeen years' tenure of office as judge of first instance; but the dignity and impartiality with which he presided at the trial (28 October 1867) of the Manchester Fenians were worthy of a more august occasion ; and his charge to the grand jury of Middlesex (2 June 1868) on the bill of indictment against the late governor of Jamaica, Mr. Edward John Eyre, though not perhaps altogether unexceptionable, is, on the whole, a sound, weighty, and vigorous exposition of the principles applicable to the determination of a question of great delicacy and the gravest imperial consequence.

The consolidation of the courts effected by the Judicature Acts of 1873 and 1875 gave Blackburn the status of justice of the high court, which numbered among its members no judge of more tried ability when the Appellate Jurisdiction Act of 1876 authorised the reinforcement of the House of Lords by the creation of two judicial life peers, designated 'lords of appeal in ordinary.' Blackburn's investiture with the new dignity met accordingly with universal approbation. He was raised to the life peerage on 10 October 1876, by the title of Baron Blackburn, of Killearn in the County of Stirlingshire,[4] and took his seat in the House of Lords and was sworn of the privy council in the following month (21, 28 November) In the part which he thencesforth took in the administration of our imperial jurisprudence, Blackburn acquitted himself with an ability so consummate as to cause his retirement in December 1886 to be felt as an almost irreparable loss. The regret was intensified by the discovery of a curious flaw in the Appellate Jurisdiction Act, by which his resignation of office carried with it his exclusion from the House of Lords. This anomaly was, however, removed by an amending act. He died, unmarried, at his country seat, Doonholm, Ayrshire, on 8 January 1896. [1]

Blackburn was a member of the royal commissions on the courts of law (1867) and the stock exchange (1877), and presided over the royal commission on the draft criminal code (1878). He was author of a masterly Treatise on the Effect of the Contract of Sale on the Legal Rights of Property and Possession in Goods. Wares, and Merchandise, London, 1845, 8vo, which held its own as the standard text-book on the subject until displaced by the more comprehensive work of Benjamin. A new edition, revised by J. C. Graham, appeared in 1885. As a reporter Blackburn collaborated with Thomas Flower Ellis. [1]

Though greatly respected he does not seem to have been popular; according to a well-known story he informed a colleague that he intended to retire in vacation to avoid the trouble of a retirement dinner — the colleague cheerfully replied that this was quite unnecessary since no-one would have turned up to the dinner anyway.[5] 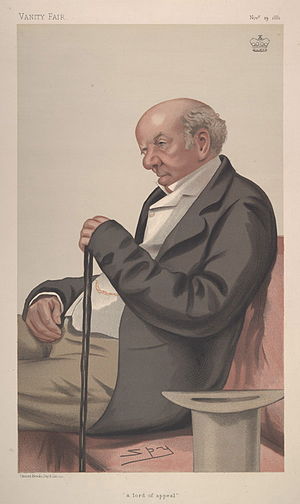 "a lord of appeal". Caricature by Spy published in Vanity Fair in 1881.

The following is a list of some of the cases in which Lord Blackburn gave leading judgments.