The Colorado Supreme Court is the highest court in the U.S. state of Colorado. Located in Denver, the Court consists of a Chief Justice and six Associate Justices.

The Court principally handles certiorari petitions in cases decided on appeal by the Colorado Court of Appeals in appeals from courts of general jurisdiction, and from appellate decisions of courts of general jurisdiction in appeals from courts of inferior jurisdiction. In addition, the Colorado Supreme Court has jurisdiction over direct appeals in cases where a trial court finds a law unconstitutional, in death penalty cases, in water law cases, in certain election cases, in interlocutory appeals (i.e., appeals in the middle of a case) in certain matters of exceptional importance for which an ordinary appeal is not a sufficient remedy, and in certain other cases.[1]

The Justices are appointed by the Governor of Colorado to serve a term of ten years after an initial two-year term from a list of three finalist candidates nominated by a Blue Ribbon Commission established by the state constitution.[2] At the end of each term, Justices face a retention election at which voters can choose to retain or not retain a Justice. If a Justice were not retained, the vacancy would be filled by the Governor at the expiration of their current term. No appellate judge has ever lost a retention election since the system was put in place in 1966. The Justices are not elected as partisan officials, although they are initially appointed by a partisan elected official.

An effort to change this system of retaining judges by initiative was rejected by voters in 2006, in part due to a campaign against the initiative which had strong support from both Democratic and Republican members of the Colorado Bar Association.

The current Colorado Supreme Court's membership, and the date each Justice was appointed, is as follows: 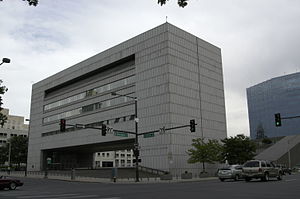 While there is a chamber originally dedicated to the Colorado Supreme Court in the state capitol building, the Colorado Supreme Court and Colorado Court of Appeals were located in their own building across the street from the state capitol from 1977 to 2010. In August 2010 the building was imploded to make way for a larger court building.[3] Construction of the new building began in September 2010.[4] That new building, dubbed the Ralph L. Carr Colorado Judicial Center, opened in early 2013. Named for a former governor of Colorado,[5] the building is located at 2 East 14th Avenue in Denver.

The State Supreme Court Building was a box-like structure raised off the ground by two square columns located on the east and west ends of the building. The only parts of the building actually on the ground level were the columns, which contained the entrances and elevators for the building.

The underside of the building featured a 150-foot mural designed by Colorado artist Angelo di Benedetto. It depicted several notable figures, including Hammurabi, Moses and Martin Luther King. The figures represented persons who are believed to have made significant contributions to law and justice. Directly beneath the mural was a large window embedded into the ground that looked down into the underground law library. Persons in the library were able to look up onto the mural via the ground level glass window.[6] The mural was removed before the building was demolished, but its ultimate fate is uncertain.[7]

The courtroom itself was located on the fifth floor of the building (the ground level columns being the first floor). The entrance to the courtroom consisted of two large brass colored metallic doors with a textured design on them. The courtroom was dimly lit with two stain glass windows depicting previous Supreme Court Justices. The well of the courtroom was circular, with a podium for counsel in the center. The podium was a circular column that resembled a container of lipstick that, unlike the rest of the courtroom, was well lit. It faced a semicircular bench with seats for seven justices. Behind the bench was a large drape through which the Justices entered the courtroom.

The Ralph L. Carr Justice Center was designed by Fentress Architects. The judicial wing is four stories tall and contains the Supreme Court courtroom and chambers and Court of Appeals courtrooms. The justice center also includes an adjacent wing that is a twelve-story office tower containing the office of the State Attorney General as well as offices for other State agencies.[8]

The new Justice Center is named for former Colorado Governor Ralph Lawrence Carr, who served from 1939 to 1943 and was noted for his opposition to Japanese American internment during World War II[9]

All opinions of the Colorado Supreme Court are published.[10] Court opinions are initially released as slip opinions and posted on the court's website. They are ultimately published in Westlaw's Pacific Reporter, a regional case reporter that is the designated official reporter for the State of Colorado. Westlaw also publishes the state-specific Colorado Reporter, repeating all Colorado cases from the Pacific Reporter and reusing that reporter's pagination and citations. The Colorado Bar Association also publishes all Colorado Supreme Court opinions in its monthly journal, The Colorado Lawyer.[11]

Between 1864 and 1980, the State published its own official reporter, Colorado Reports. Concurrent coverage in the Pacific Reporter began in 1883.[12]