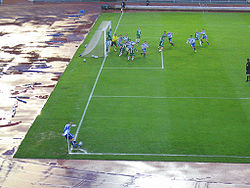 A picture of the exact moment the blue-white team's corner kick is taken. 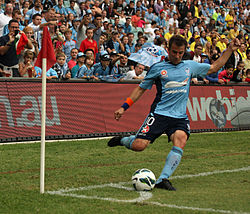 A corner kick is a method of restarting play in a game of association football. It was devised in Sheffield under the 1867 Sheffield Rules. It was adopted by the Football Association on 17 February 1872.

A corner kick is awarded to the attacking team when the ball leaves the field of play by crossing the goal line (either on the ground or in the air) without a goal having been scored, having been last touched by a defending player. The kick is taken from the corners of the field of play nearest to where the ball crossed the goal line. Corners are considered to be a reasonable goalscoring opportunity for the attacking side, though not as much as a penalty kick or a direct free kick near the edge of the penalty area.

The assistant referee will signal that a corner should be awarded by first raising his flag, then using it to point at the corner arc on their side of the pitch; however, this is not an indication of which side the kick should be taken from. The referee then awards the corner by pointing to the relevant arc. 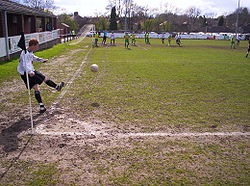 The attacking side may score directly from a corner kick, though this is uncommon.

An attacking player who directly receives the ball from a corner kick cannot be penalised for offside.

Opposing players must retire the required distance as stated above. Failure to do so promptly may constitute misconduct and be punished by a yellow card.

It is an offence for the kicker to touch the ball a second time until it has been touched by another player; this is punishable by an indirect free kick to the defending team from where the offense occurred,[1] unless the second touch was also a more serious offence, in which case other punishment such as a direct free kick is awarded to defending team. 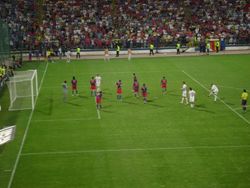 Tactics in taking and defending a corner 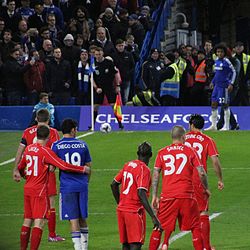 A common tactic is for several attackers to stand close in front of the goal, whereupon the corner taker crosses the ball for them to head into the goal.

The defending team may choose to form a wall of players in an attempt to force the ball to be played to an area which is more easily defended. However, this is not done often because defending players must remain at least 10 yards from the ball until it is in play.

The defending team also has the choice of whether to instruct a player to place him or herself beside one or both of the goalposts to provide protection to the goal in addition to the goalkeeper. The thinking behind placing a player beside a goalpost is that it means more of the goal area is protected and there is no loss in the ability to play an offside trap because offside does not apply for the first touch from a corner, and it compensates for a keeper's positioning and/or reach.

The defending team also has to decide how many players it needs to defend a corner. Teams may withdraw every player into a defensive area, however this diminishes the potential for a counter-attack if possession is regained, and as such, allows the attacking side to commit more players to attacking the goal. Withdrawing all players into a defensive area also means that if the ball is cleared from an initial cross, it is more than likely that the attacking team will regain possession of the ball and begin a new attack.

In situations where a set-piece, such as a corner, is awarded to a side trailing by a single goal at the closing stages of a match where conceding further is of minimal consequence (i.e. in a knockout tournament) a team may commit all their players, including their goalkeeper, to the attack.

An alternative strategy for the attacking team is to take a short corner. The ball is kicked to a player located within ten yards of the kicker, to create a better angle of approach toward the goal.

A rarely seen "trick" version of the short corner was attempted during a tense top-of-the-table Premier League clash between Manchester United and Chelsea in the 2008–09 season, causing much controversy and media discussion. The strategy involved United's Wayne Rooney, standing at the corner flag, pretending to change his mind about taking the corner and signalling to winger Ryan Giggs to do it instead. While leaving the arc, however, Rooney sneakily touched the ball, effectively putting it into play. With Chelsea's defence unprepared and expecting a conventional corner, Giggs took the ball, sprinted with it towards goal and crossed it for teammate Cristiano Ronaldo to score with a header. On this occasion, the goal was disallowed after the linesman, not having seen Rooney's taking of the corner, raised his flag, thus prompting the referee to stop play. The end result did not change much, though, as Manchester United scored again when the corner was retaken. A similar strategy was attempted by the Colombian national team at the 2014 World Cup against Greece, though once again the linesman penalized them for it. The strategy is rare.

Scoring a goal direct from a corner 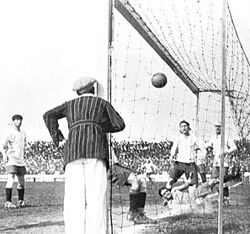 The ball, shot by Cesáreo Onzari, scores a goal for Argentina against Uruguay. This was the first goal scored direct from a corner, in 1924.

It is possible to score direct from a corner kick (as a corner kick is a direct free kick) if sufficient swerve is given to the kick, and/or there is a strong enough wind blowing in the goalward direction. However, it was illegal until the International Football Association Board (IFAB) meeting of 15 June 1924 authorised it for the following season.[2][3] This type of goal is called an Olympic goal or Olympic kick,[4] or gol olímpico in Latin America.[2] The name dates from 2 October 1924, when Argentina's Cesáreo Onzari scored against Uruguay, who had just won the 1924 Olympic title.[2][5] (The first such goal was thought to have been scored by Billy Alston in Scotland on 21 August 1924, but further research showed that match had been played on 23 August 1923, and the goal was actually a header.[2]) The first in England was by Huddersfield Town's Billy Smith on 11 October 1924. Portuguese footballer João Morais scored a direct corner kick for Sporting Clube de Portugal in the 1964 European Cup Winners' Cup Final, eventually deciding the match and the destiny of the trophy. The world record holder for most direct corner kick goals is a Turkish player named Sükrü Gülesin ,during his career he scored 32 goals directly from corners. In the 1950s this apparently appeared in the Guinness Book of Records as a world best.[6]

Megan Rapinoe of the United States women's national soccer team scored an Olympic goal direct from a corner kick in the semifinal match between the United States and Canada in the 2012 Summer Olympics in London becoming the first player ever to score an "Olympic goal" during an Olympic match.[7] The only Olympic goal in the World Cup was scored for Colombia by Marcos Coll, beating goalkeeper Lev Yashin in a 4–4 draw with the Soviet Union in 1962.

According to the laws of the game, if a player puts the ball into their own goal directly from a restart of play (e.g. direct and indirect free kicks, drop-balls, and throw-ins) without the ball being touched by any other player, a corner kick is awarded to the other team and not an "own goal" which it would appear to be. Such incidents are extremely rare.

A mistake relating to that rule appeared to be committed by referee during a Premier League derby match between Birmingham City and Aston Villa during the 2002/03 season. Aston Villa defender Olof Mellberg threw the ball towards his goalkeeper (Peter Enckelman), who seemed to miss the ball completely and the ball went into the net. The referee gave a goal to Birmingham even though it appeared that Enckelman may not have touched the ball – television replays were inconclusive. If the referee had determined that Enckelman had not touched the ball, he would have awarded a corner kick to Birmingham.[9]