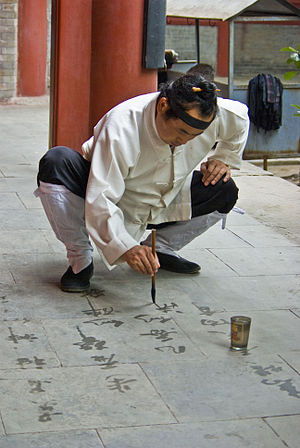 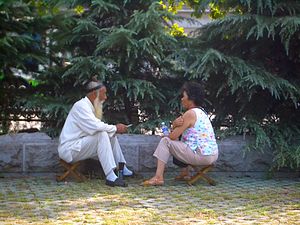 Soothsayer outside of Changchun Temple, Wuhan.

Daoshi (道士) refers to a priest in Taoism. According to legend, these Taoist recluses would practice alchemy and austerity in the mountains, with the aim of becoming xian, or immortal beings. The activities of the daoshi tend to be informed by materials which may be found in the Daozang, or Daoist canon; however, daoshi generally choose, or inherit, specific texts which have been passed down for generations from teacher to student, rather than consulting published versions of these works. Daoshi practices can include various ceremonies, including fortune telling.

Today there are two dominant priesthoods. The Quanzhen School, which is dominant in the northern half of the People's Republic of China, have priests that resemble Buddhist monks in that they are celibate, vegetarian, and live in temples. One of the most renowned locations is the White Cloud Temple in Beijing.

The other main priesthood is the Zhengyi Dao, in which the priests can marry, eat meat, and live in their own homes. They are mostly priests part-time and can hold other jobs. They are present all over China, although with different names according to the local lineages. For example, in northern China there are the yinyang masters of the Lingbao sub-tradition.[1]